Brexit timeline. Britain and the EU: A long and rocky relationship. Image copyright Thinkstock The United Kingdom's relationship with the EU - or, in political parlance, "Europe" - has long been one of the most divisive, emotive issues in British politics. 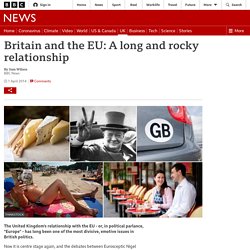 Now it is centre stage again, and the debates between Eurosceptic Nigel Farage and Europhile Nick Clegg bring the argument down to a stark, binary choice not seriously faced in decades - In, or Out. But why does Europe produce such a polarised reaction? Many Britons, on both sides of the debate, love visiting European countries and idolise elements of their culture - not least the food. Indeed, more than 1.5 million Britons have moved there to live.

But Europeans viewing British newspaper coverage, political debates or opinion polls would be forgiven for thinking we have little but contempt for our neighbours. Time. Brexit explained: What is the problem with the Irish border? Infographic on the eu backstop proposal. Backstop: Why is the Irish border blocking Brexit? Media playback is unsupported on your device Prime Minister Boris Johnson insists "there is a way" to avoid checks along the Irish border after Brexit. 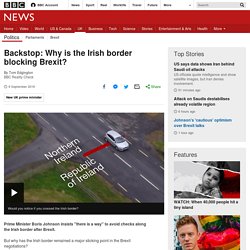 The Funds – Community Living for Europe: Structural Funds Watch. €351.8 billion of the European Union’s budget is allocated to Cohesion Policy 2014-2020 that is to be the principle investment tool for delivering the Europe 2020 strategy for smart, sustainable and inclusive growth. 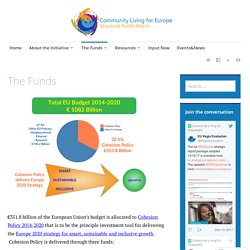 Cohesion Policy is delivered through three funds: Revision of Total Structural Funds allocation to each EU member state from Thu, 2019-06-06 13:28. Map of Europe showing GDP in PPP per capita estimated by IMF for year 2017. : europe. Brexit: All you need to know about the UK leaving the EU. Under the terms of the deal, that won't change on 1 January, but to be sure that neither side has an unfair advantage, both sides had to agree to some shared rules and standards on workers' rights, as well as many social and environmental regulations.

Why did older voters choose Brexit? It's a matter of identity. Just a few days before the EU referendum – on June 19 and 20 – we carried out an internet survey of the electorate in Britain and asked more than 2,100 people how they were planning to vote. 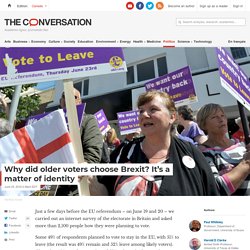 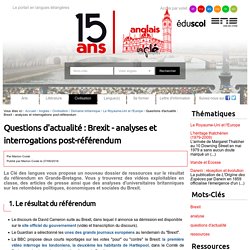 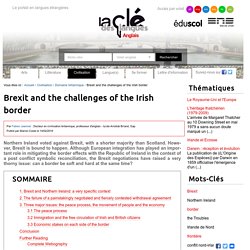 The "Populist Moment": Towards a "post-liberal" Europe? The "West" is experiencing a "populist moment" and continental Europe is not being spared this. 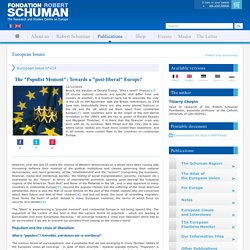 The argument at the centre of this text is that the various forms of populism - which are feeding a Eurosceptic and even Europhobic discourse - all converge towards a crisis over liberalism which has to be surmounted if we are to prevent our societies from closing on the modern world. Brexit has raised support for the European Union: eupinions - OPINIONS, MOODS AND PREFERENCES OF EUROPEAN CITIZENS.

The government's negotiating objectives for exiting the EU: PM speech. A little over 6 months ago, the British people voted for change. 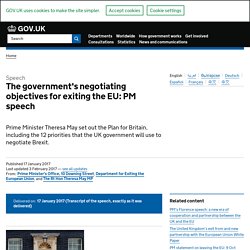 They voted to shape a brighter future for our country. How the United Kingdom voted on Thursday... and why - Lord Ashcroft Polls. By Lord Ashcroft The UK has voted to leave the European Union. On referendum day I surveyed 12,369 people after they had voted to help explain the result – who voted for which outcome, and what lay behind their decision. The rise of the Anglosphere: how the right dreamed up a new conservative world order. Understanding Euroscepticism: How British hostility to the EU contrasts with opposition elsewhere in Europe.

The UK’s referendum on EU membership may well be one of the main stories of 2016, with the British Prime Minister, David Cameron, recently suggesting that it could be held as early as the summer. 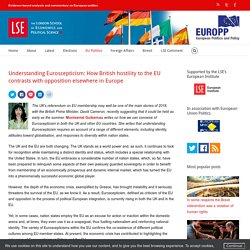 Montserrat Guibernau writes on how we can conceive of Euroscepticism in both the UK and other EU countries. She writes that understanding Euroscepticism requires an account of a range of different elements, including identity, attitudes toward globalisation, and responses to diversity within nation states. 20151209EuroscepticismGoodwinMilazzo. The Eurosceptic map of Britain. Brexit vote boosts case for inclusive growth. In the United Kingdom’s Brexit referendum, income inequality and poverty boosted ‘leave’ votes, in addition to geographical differences and larger shares of uneducated and older people in UK regions, according to my regression analysis. 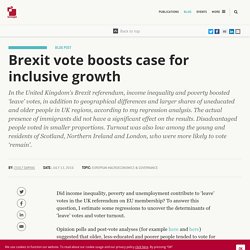 The actual presence of immigrants did not have a significant effect on the results. Disadvantaged people voted in smaller proportions. Turnout was also low among the young and residents of Scotland, Northern Ireland and London, who were more likely to vote ‘remain’. Did income inequality, poverty and unemployment contribute to ‘leave’ votes in the UK referendum on EU membership? To answer this question, I estimate some regressions to uncover the determinants of ‘leave’ votes and voter turnout. Opinion polls and post-vote analyses (for example here and here) suggested that older, less-educated and poorer people tended to vote for leave. I therefore use a regression analysis. Regressions Determinants of ‘leave’ votes Source: author’s calculations.