Newsela. Charts: America's Political Divide, From 1994–2017. Politics can be a hot button topic in America. 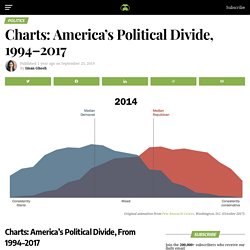 With rising tensions on both sides of the political spectrum, some claim that bipartisanship is dead. Recent research shows that may well be true. Today’s charts come from a report by the independent think tank Pew Research on the partisan divide between the two major U.S. political parties, Democrats and Republicans. The data is based on surveys of over 5,000 adults to gauge public sentiment, tracking the dramatic shifts in political polarization in the U.S. from 1994 to 2017. The results are a fascinating deep dive into America’s shifting political sentiment.

Over Two Decades of Differences The animation above demonstrates how the political divide by party has grown significantly and consistently over 23 years. By 2017, the divide had significantly shifted towards the two extremes of the consistently liberal/conservative scale. How have Americans’ feelings across major issues evolved over time? Google Trends. 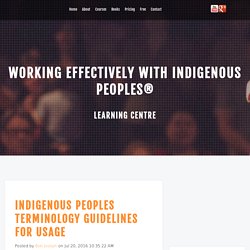 In this article we drill down on guidelines for usage. Terms for Indigenous Peoples have evolved over time and are continuing to evolve. The First Peoples of this land now known as Canada formerly had unique communities with unique names - there wasn’t a need for collective nouns or complicated terminology. With European contact and ensuing colonization, the government required people to be defined and labeled for ease of governing. 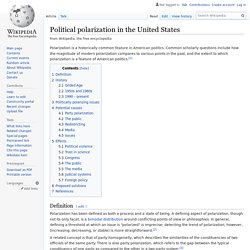 Common scholarly questions include how the magnitude of modern polarization compares to various points in the past, and the extent to which polarization is a feature of American politics.[1] Definition[edit] Polarization has been defined as both a process and a state of being. A defining aspect of polarization, though not its only facet, is a bimodal distribution around conflicting points of view or philosophies. In general, defining a threshold at which an issue is "polarized" is imprecise; detecting the trend of polarization, however, (increasing, decreasing, or stable) is more straightforward.[2] A related concept is that of party homogeneity, which describes the similarities of the constituencies of two officials of the same party. 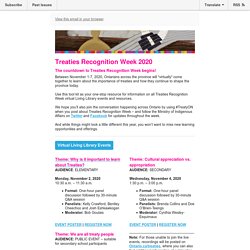 US political system: How does it work? Senate, House of Representatives and more explained. The US Government is divided into three clearly defined branches – the president and his cabinet (the executive), the US Congress (the legislature) and the courts (the judiciary). 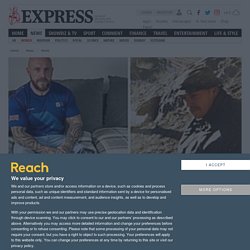 The separation of powers is designed to provide a system of checks and balances which prevent any individual or group from gaining too much control. What is the US Congress and how does it work? Like the British Parliament, the US Congress decides and makes the laws that govern America. It also has the power to impeach the President and remove them from office. The US Congress is made up of an upper chamber, known as the Senate, and a lower chamber known as the the House of Representatives. Both houses are based at the Capitol Building in Washington, DC. Americans will elect members to both houses as as well as electing a President and Vice President on the election day tomorrow.