Exercise Can Boost Teens' Academic Performance. Many teenagers are more interested in watching TV and playing video games than exercising. 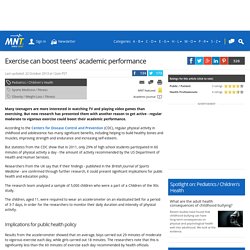 But new research has presented them with another reason to get active - regular moderate to vigorous exercise could boost their academic performance. According to the Centers for Disease Control and Prevention (CDC), regular physical activity in childhood and adolescence has many significant benefits, including helping to build healthy bones and muscles, improving strength and endurance and increasing self-esteem. But statistics from the CDC show that in 2011, only 29% of high school students participated in 60 minutes of physical activity a day - the amount of activity recommended by the US Department of Health and Human Services. Researchers from the UK say that if their findings - published in the British Journal of Sports Medicine - are confirmed through further research, it could present significant implications for public health and education policy. They add: Written by Honor Whiteman. Exercise Can Improve Teens' Grades: British Study. 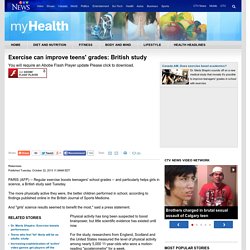 The more physically active they were, the better children performed in school, according to findings published online in the British Journal of Sports Medicine. And "girls' science results seemed to benefit the most," said a press statement. Physical activity has long been suspected to boost brainpower, but little scientific evidence has existed until now. For the study, researchers from England, Scotland and the United States measured the level of physical activity among nearly 5,000 11-year-olds who wore a motion-reading "accelerometre" for a week. Factors Supporting Academic Success. How Music Can Change Your Brain. How Much Maths Homework Is Too Much?

How to Improve Your Academic Skills for Teenagers. Kids and Toxic Chemicals. Chemicals have many uses in the modern environment. 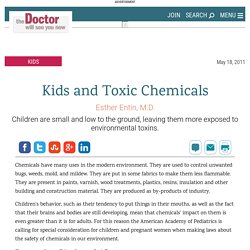 They are used to control unwanted bugs, weeds, mold, and mildew. They are put in some fabrics to make them less flammable. They are present in paints, varnish, wood treatments, plastics, resins, insulation and other building and construction material. They are produced as by-products of industry. Children's behavior, such as their tendency to put things in their mouths, as well as the fact that their brains and bodies are still developing, mean that chemicals' impact on them is even greater than it is for adults. Remember Bisphenol A? The much-publicized recent concerns about BPA highlight the kinds of problems day-to-day exposure to chemicals can cause. Lead Poisoning Behind School Problems. We are surrounded by environmental chemical pollutants. 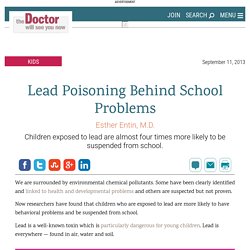 Some have been clearly identified and linked to health and developmental problems and others are suspected but not proven. Now researchers have found that children who are exposed to lead are more likely to have behavioral problems and be suspended from school. Lead is a well-known toxin which is particularly dangerous for young children.

Lead is everywhere — found in air, water and soil. Children who had been exposed to lead were almost four times more likely to be suspended at least once in the fourth grade than the children who were not. Promoting Your Teen’s Academic Success. Shut-down Learners. Throughout preschool and her early elementary grades, Emma was sunny, confident, and engaged in school. 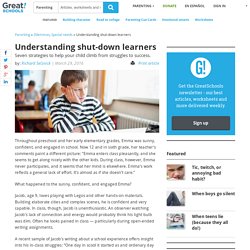 Now 12 and in sixth grade, her teacher’s comments paint a different picture: “Emma enters class pleasantly, and she seems to get along nicely with the other kids. During class, however, Emma never participates, and it seems that her mind is elsewhere. Emma’s work reflects a general lack of effort. It’s almost as if she doesn’t care.” The Power of Mistakes. One of the most valuable things parent and teachers can do for kids is to help them learn from their mistakes. 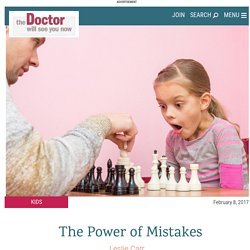 And that begins with having them pay attention to their errors. Many parents and teachers take the opposite approach. They might say, for example, “Good job!” When kids are having trouble, or, “Don't worry. You'll get it the next time.” The problem is, when parents don't acknowledge mistakes, they don't give kids a chance to figure out what went wrong. The key seems to be believing that intelligence can grow. Children who believed they could get smarter — who had a growth mindset — were more likely to have a larger brain response after making a mistake.

Over 120 children, average age 7, took part in the study. First, the researchers asked the children questions to determine whether they believed people can work harder and get smarter — a growth mindset — or believed intelligence cannot be changed — a fixed mindset. The Science of Studying. It's that time of year again: exams are here and students around the country are busy trying to cram as much information into their brains as they can. 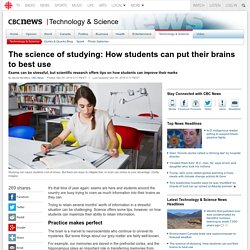 Trying to retain several months' worth of information in a stressful situation can be challenging. Science offers some tips, however, on how students can maximize their ability to retain information. Practice makes perfect The brain is a marvel to neuroscientists who continue to unravel its mysteries. But some things about our grey matter are fairly well-known. Tips to make math more enjoyable for young learners. If you’ve got a problem with math, it’s time to get over it. 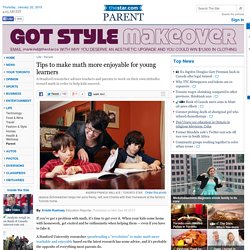 When your kids come home with homework, get excited and be enthusiastic when helping them — even if you have to fake it. A Stanford University researcher spearheading a “revolution” to make math more teachable and enjoyable based on the latest research has some advice, and it’s probably the opposite of everything most parents do. Jo Boaler’s work comes amid concerns over math scores world-wide after the latest release of international testing showed a drop in results, and a significant decline here in Canada.

She has tip sheets for educators and parents at her website, youcubed.org. Never, ever say “I’m not good at math” — not even in sympathy when you see children struggling to figure out a problem.