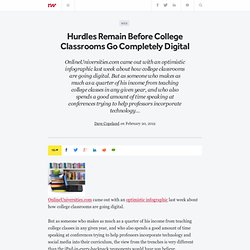 But as someone who makes as much as a quarter of his income from teaching college classes in any given year, and who also spends a good amount of time speaking at conferences trying to help professors incorporate technology and social media into their curriculum, the view from the trenches is very different than the iPad-in-every-backpack proponents would have you believe. This is not to say that tech isn't changing the way we teach and the way students learn: it most certainly is. But probably not as fast as some people outside of higher ed think it is. iPads Are Outselling Desktop PCs, And Are Now Equal To 17% Of The PC Market. Students' Declining Access to Research. New How Are Smartphones Being Used? Smartphone-usage-infographic1.jpg (640×1138) Focus on Smartphone Owners. One-third of American adults (35%) own a smartphone of some kind as of May 2011, and these users stand in marked contrast to cell owners with more basic devices in terms of how they utilize their mobile devices and incorporate them into their lives. 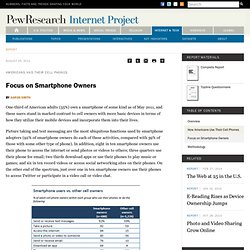 Picture taking and text messaging are the most ubiquitous functions used by smartphone adopters (92% of smartphone owners do each of these activities, compared with 59% of those with some other type of phone). In addition, eight in ten smartphone owners use their phone to access the internet or send photos or videos to others; three quarters use their phone for email; two thirds download apps or use their phones to play music or games; and six in ten record videos or access social networking sites on their phones. Web 3.0 / Semantic Web: What it means for academic users, libraries... Posts by Marshall Breeding. What's In Store for the Library Automation Industry in 2012?

This article appears in the January 2012 issue of Smart Libraries Newsletter. 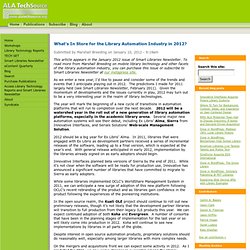 To read more from Marshall Breeding on mobile library technology and other facets of the library automation industry, you can purchase this issue or subscribe to Smart Libraries Newsletter at our metapress site. As we enter a new year, I’d like to pause and consider some of the trends and events that I anticipate playing out in 2012. The predictions I made for 2011 largely held (see Smart Libraries Newsletter, February 2011). Sbux_logo_today.jpg (227×227) How students (and faculty) really find articles. In January we started piloting the Wiley pay-per-view option. 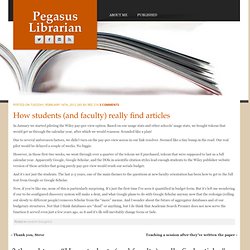 Based on our usage stats and other schools’ usage stats, we bought tokens that would get us through the calendar year, after which we would reassess. Sounded like a plan! Due to several unforeseen factors, we didn’t turn on the pay-per-view access in our link resolver. Seemed like a tiny bump in the road.

Our real pilot would be delayed a couple of weeks. However, in those first two weeks, we went through over a quarter of the tokens we’d purchased, tokens that were supposed to last us a full calendar year. And it’s not just the students. Now, if you’re like me, none of this is particularly surprising. Envisioning Future Academic Library Services: Initiatives, Ideas and Challenges (book review) Printer-friendly version Send to friend John Azzolini reviews a timely collection of essays that highlights the values of institutional leadership and resourcefulness in academic librarianship's engagements with Web 2.0. 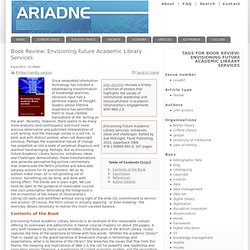 Envisioning Future Academic Library Services: Initiatives, ideas and challenges. Edited by Sue McKnight, Facet Publishing, 2010, paperback ISBN 978-1-85604-691-6, 247 pages. Alignment of Lib Technical Services to Changing Needs of Users. Rethinking Resource Sharing Conference. This was on the wall as part of the ground rules in the large meeting room for the RRS Comnference. 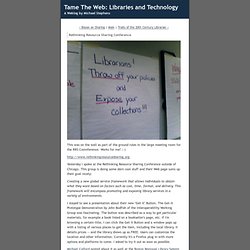 Works for me! :-) Yesterday I spoke at the Rethinking Resource Sharing Conference outside of Chicago. This group is doing some darn cool stuff and their Web page sums up their goal nicely: Creating a new global service framework that allows individuals to obtain what they want based on factors such as cost, time, format, and delivery. I stayed to see a presentation about their new "Get It" Button. Visions: The Academic Library in 2012. Introduction The future of the academic library is a topic of continuing concern for the profession, but usually the boundaries of projected visions are set firmly in the issues and debates of the day. 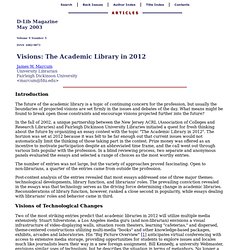 What means might be found to break open those constraints and encourage visions projected further into the future? In the fall of 2002, a unique partnership between the New Jersey ACRL (Association of Colleges and Research Libraries) and Fairleigh Dickinson University Libraries initiated a quest for fresh thinking about the future by organizing an essay contest with the topic "The Academic Library in 2012". The Changing Library Environment of Technical Services. Harvard U. Library Announces New Organizational Design and Strategic Direction. 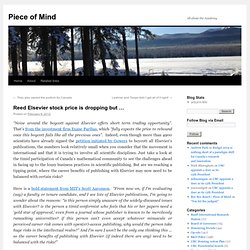 That’s from the investment firm Exane Paribas, which “fully expects the price to rebound once this boycott fails like all the previous ones”. Indeed, even though more than 4900 scientists have already signed the petition initiated by Gowers to boycott all Elsevier’s publications, the numbers look relatively small when you consider that the movement is international and that it is trying to involve all scientific disciplines. Just take a look at the timid participation of Canada’s mathematical community to see the challenges ahead in facing up to the lousy business practices in scientific publishing. But are we reaching a tipping point, where the career benefits of publishing with Elsevier may now need to be balanced with certain risks? Here is a bold statement from MIT’s Scott Aaronson.

Journal costs: Though not alone among publishers in price gouging, Elsevier’s prices are ridiculously high.