Storing OER. ED Tech Startups. EDx Online. MOOCs. UDEMY. UDACITY. COURSERA. Recognition for Skills. Free access to British scientific research to be available within two years. The government is to unveil controversial plans to make publicly funded scientific research immediately available for anyone to read for free by 2014, in the most radical shakeup of academic publishing since the invention of the internet. 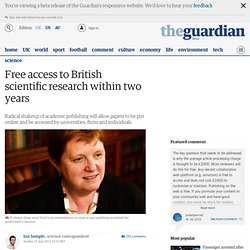 Under the scheme, research papers that describe work paid for by the British taxpayer will be free online for universities, companies and individuals to use for any purpose, wherever they are in the world. In an interview with the Guardian before Monday's announcement David Willetts, the universities and science minister, said he expected a full transformation to the open approach over the next two years. The move reflects a groundswell of support for "open access" publishing among academics who have long protested that journal publishers make large profits by locking research behind online paywalls. Acesso gratuito à investigação científica britânica. Não seria ótimo e mais coerente se o trabalho de pesquisa científica realizado a partir de financiamento público fosse “devolvido” à população em forma de acesso gratuito? 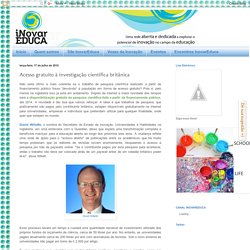 It began with a frustrated blogpost by a distinguished mathematician. 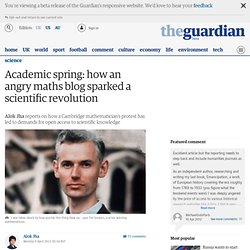 Tim Gowers and his colleagues had been grumbling among themselves for several years about the rising costs of academic journals. They, like many other academics, were upset that the work produced by their peers, and funded largely by taxpayers, sat behind the paywalls of private publishing houses that charged UK universities hundreds of millions of pounds a year for the privilege of access. There had been talk last year that a major scientific body might come out in public to highlight the problem and rally scientists to speak out against the publishing companies, but nothing was happening fast. So, in January this year, Gowers wrote an article on his blog declaring that he would henceforth decline to submit to or review papers for any academic journal published by Elsevier, the largest publisher of scientific journals in the world.

He was not expecting what happened next. False Accounting? Why Higher Education Reforms Don’t Add Up « The Intergenerational Foundation. Download the report Author: Dr Andrew McGettigan Date: 17 May 2012 The Coalition government’s reforms to higher education funding in England have been enormously controversial ever since they were first announced. 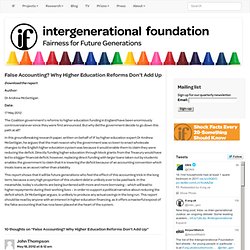 In this groundbreaking research paper, written on behalf of IF by higher education expert Dr Andrew McGettigan, he argues that the main reason why the government was so keen to enact wholesale changes to the English higher education system was because it would enable them to claim they were reducing the deficit. This report shows that it will be future generations who feel the effect of this accounting trick in the long term, because a very high proportion of this student debt is unlikely ever to be paid back. Universities Reshaping Education on the Web. Is online learning really cracking open the public post-secondary system? What MIT Should Have Done. Ten thousand students have just taken the final exam in MITx's course "6.002x Circuits and Electronics. " The sheer size of this course (120,000 first registered back in March), the high-wattage backing of MIT for a certificate of completion to all those who make it through to the end, and the free, open access nature of this MOOC (a "massive open online course") seemingly ushers in a fundamentally new paradigm in higher education.

When coupled with the recent headlines about similar ventures such as Coursera, Udacity, and MIT's own new partnership with Harvard to form edX, the policy world has been positively aglow: David Brooks calls it a "campus tsunami"; John Chubb proclaims it an "historic transformation"; Thomas Friedman writes, simply, "welcome to the college education revolution.

" The Digital Transformation of Education: A 21st Century Imperative. Over the past several years, the education debate in America has increasingly become a conversation about technology. 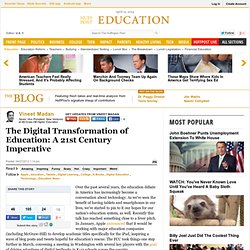 As we've seen the benefit of having tablets and smartphones in our lives, we've started to pin to it our hopes for our nation's education system, as well. Recently this talk has reached something close to a fever pitch. In January, Apple announced that it would be working with major education companies (including McGraw-Hill) to develop academic titles specifically for the iPad, inspiring a wave of blog posts and tweets hopeful for education's rescue. The FCC took things one step further in March, convening a meeting in Washington with several key players with the goal of driving adoptions of digital textbooks in K-12 schools across the country.