Chord progressions of 25 000 songs! The Hooktheory.com database contains analyses of over 25000 songs. 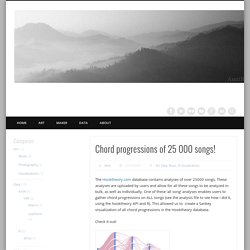 These analyses are uploaded by users and allow for all these songs to be analyzed in bulk, as well as individually. One of these ‘all song’ analyses enables users to gather chord progressions on ALL songs (see the analysis file to see how i did it, using the hooktheory API and R). This allowed us to create a Sankey visualization of all chord progressions in the Hooktheory database. Check it out! (If you prefer the dynamic version where you can play with the data, have a look at the following link: Click here!).

Tristan chord. Background[edit] The notes of the Tristan chord are not unusual; they could be rearranged to form a common half-diminished seventh chord. 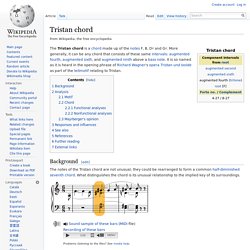 What distinguishes the chord is its unusual relationship to the implied key of its surroundings. Much has been written about the Tristan chord's possible harmonic functions or voice leading (melodic function), and the motif has been interpreted in various ways. For instance, Arnold Schering traces the development of the Tristan chord through ten intermediate steps, beginning with the Phrygian cadence (iv6-V) (Schering 1935,[page needed]). Beethoven's Sonata Op. 31, No. 3, with notes of Tristan chord The Tristan chord's significance is in its move away from traditional tonal harmony, and even towards atonality.

Analysis[edit] The math in music. Book shopping happened over the weekend! I am... - Annelise's Notebooks. Why are so many lullabies also murder ballads? Why do so many child lullabies have such dark undertones, and when it comes to their ability to soothe, does it matter? 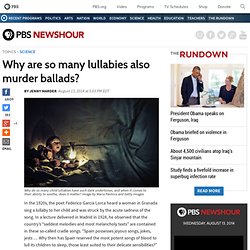 Image by Maria Pavlova and Getty Images In the 1920s, the poet Federico García Lorca heard a woman in Granada sing a lullaby to her child and was struck by the acute sadness of the song. In a lecture delivered in Madrid in 1928, he observed that the country’s “saddest melodies and most melancholy texts” are contained in these so-called cradle songs. “Spain possesses joyous songs, jokes, jests … Why then has Spain reserved the most potent songs of blood to lull its children to sleep, those least suited to their delicate sensibilities?” Out of the Shadow - Rolling Stone South Africa. Sean Lennon lives in a red-brick house in Lower Manhattan that he has filled with his life in music. 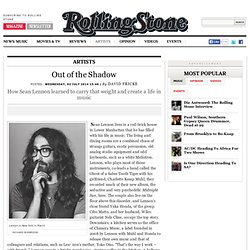 The living and dining rooms are a combined chaos of strange guitars, exotic percussion, old analog studio equipment and odd keyboards, such as a white Mellotron. Lennon, who plays most of those instruments, co-leads a band called the Ghost of a Saber Tooth Tiger with his girlfriend, Charlotte Kemp Muhl; they recorded much of their new album, the seductive and very psychedelic Midnight Sun, here. The couple also live on the floor above this disorder, and Lennon’s close friend Yuka Honda, of the group Cibo Matto, and her husband, Wilco guitarist Nels Cline, occupy the top story.

Downstairs, a kitchen serves as the office of Chimera Music, a label founded in 2008 by Lennon with Muhl and Honda to release their own music and that of colleagues and relations, such as Len- non’s mother, Yoko Ono. "He took a big risk becoming a musician," says Ono. "People don’t realise," Sean goes on. Liberation Chorus - Do The Math. Is This Your Song? The Science Behind What Determines Your Taste In Music.

We’ve all been through this scenario. 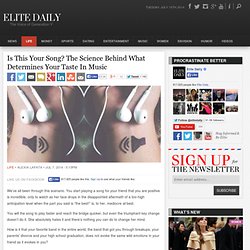 You start playing a song for your friend that you are positive is incredible, only to watch as her face drops in the disappointed aftermath of a too-high anticipation level when the part you said is “the best!” Is, to her, mediocre at best. You will the song to play faster and reach the bridge quicker, but even the triumphant key change doesn’t do it. She absolutely hates it and there’s nothing you can do to change her mind. How is it that your favorite band in the entire world, the band that got you through breakups, your parents’ divorce and your high school graduation, does not evoke the same wild emotions in your friend as it evokes in you? How is it that she doesn’t get those same chills you get during the chorus or feel the weight of the words’ meanings as heavily as you do?

What really determines the music that you — and others — come to fall in love with? We end up liking some stuff, we end up hating some stuff. Think about it. In other book shopping news, I am carrying... - Annelise's Notebooks. Let's Stop Singing Songs About Women Who Don't Know They're Beautiful. Mary Lambert - She Keeps Me Warm (2013 Version) Everyone’s a Little Bit Sexist — Human Parts.