The Local - Sweden's News in English 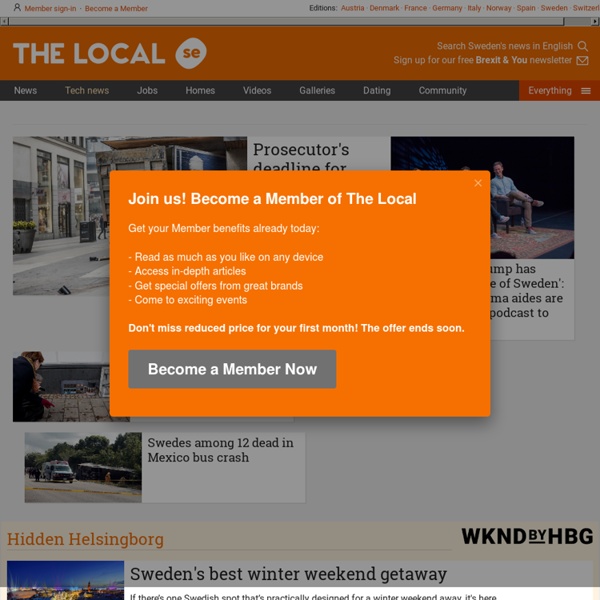 New York Times lesson plans Photo Do your students follow Humans of New York? The site and the related Tumblr and Facebook page created by the amateur photographer Brandon Stanton have millions of followers, and the “Humans of New York” book, published in October, landed in the No. 1 spot on the New York Times hardcover nonfiction best-seller list its first week on sale. Free eBooks to read at home! Everyone deserves a rest when they're at home but it’s also important for children to keep up with their reading practice if they can. To help make reading fun at home, we're providing FREE eBook access for teachers, parents and children to a range of Bug Club eBooks! No sign-up, no login, no fuss. Anyone can take part! 1.

E-waste, recycling, and sustainability - Geography (9,10) - ABC Splash - A TV monitor lies amongst electronic trash. Playing on it are images of recycling trash being picked up by truck and sorted and processed in plants.TANYA HA, REPORTERRight now, you are watching trashy television and I mean that in the nicest possible way. But the way we sort the stuff we want from the stuff we don't all boils down to some beautiful simple physics in action, starting with size and weight.Rubbish passes over a vibrating conveyer belt, some of it falling off.TANYA HAThis incline of vibrating, spinning rubber discs acts like a giant sieve.

US Presidential Election Background 2016 presidential candidates Basic details of each candidate’s backgroundWhere the Candidates Stand on 2016’s Biggest IssuesWhat happens when … and how The important dates, Feb-Nov, listed and explained2016 Primary Results and Calendar Quickview of the results so far by NYTimes Warm-up What do kids want in a president?

One in five young people has suffered online abuse, study finds Cyberbullying is a worse problem among teenagers than drug abuse, according to almost half of all young people surveyed in a new study that finds one in five has experienced online abuse. In the global YouGov survey of more than 4,700 teenagers from across the world, a fifth of those who had experienced cyberbullying said it had made them consider suicide, and more than half said being taunted online was worse than being bullied in person. A quarter of those bullied closed down social media accounts and more than a fifth skipped school, the survey commissioned by Vodafone found. Of those who were bullied, almost 40% did not tell their parents, citing feelings of shame or fear.

Free Word Games, Vocabulary Building Exercises, English Language Quizzes Looking for mobile games? Create words on the letter wheels Mastermind variation with words Illuminate the hidden word with your mouse Fill in the blanks to finish the arithmetic problem Sweden elections: How do they work? National, regional, and local elections are taking place in Sweden on September 14th. Whether you're a first-time voter or a fresh armchair observer, The Local's beginners' guide will answer the key questions you were too afraid to ask. Why is Sweden holding elections now? There are elections in Sweden every four years. There are 349 seats up for grabs in the national parliament (Riksdag) and registered voters will also choose the next politicians to make up 21 county councils and 290 municipal assemblies.

Grammar Bytes! Grammar Instruction with Attitude Grammar Instruction with Attitude Home • Terms • Exercises • MOOC • Handouts • Presentations • Videos • Rules • About • Shop • Feedback ©1997 - 2020 by Robin L. SimmonsAll Rights Reserved. The Times in Plain English Something About Which We All Agree: Clutter is the Enemy Teenager's bedroom with clothes, books, and CDs thrown around. There is something about piles of clothing and other household goods. When closets, drawers, and shelves are overflowing, people use the dreaded word: clutter. Clutter, it turns out, is not a … Ukraine and Russia: The Religious Side of the War 100 books every child should read - Pt 1 "I'll 'ave that," is the catchphrase of the rogue who stars in this engaging and beautifully illustrated tale. When Bill accidentally burglarises a baby, it turns out to be a blessing in a stolen basket. "Runfrit, Boglaboll!" The Tiger Who Came To Tea, by Judith Kerr (HarperCollins, £5·99)

Stockholm's shocking take on Halloween American Bill Schacht missed the spooky outfits, family feasts and charity events he associated with Halloween when he moved to Sweden. So he did something about it. The Local meets the founder of the capital's annual Shockholm parade. Halloween is a relatively young tradition in Sweden, with few people celebrating it until the 1990s. But the festival is gradually becoming an annual event here as Swedes slowly embrace scary costumes, cobweb decorations and group get-togethers. "The potential for Halloween to grow in Sweden is huge but you can't compare it to how it's celebrated elsewhere just yet," American Bill Schacht tells The Local.