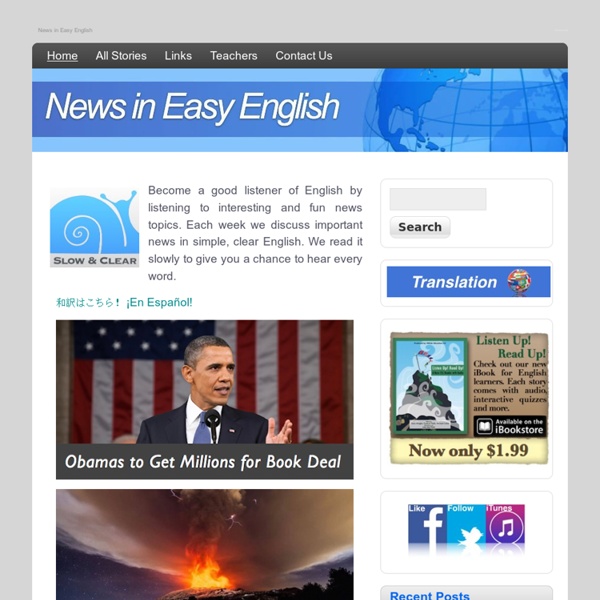 ESL News New ZealandGrammy Awards » ESL News New Zealand You probably already know that Lorde won two Grammy awards yesterday. She had been nominated for four awards and won two. She won the Best Pop Solo Performance. She and her co-song-writer Joel Little, won the Song of the Year for the song Royals. She performed this song earlier in the ceremony, dressed in a white shirt with black trousers.

One in five young people has suffered online abuse, study finds Cyberbullying is a worse problem among teenagers than drug abuse, according to almost half of all young people surveyed in a new study that finds one in five has experienced online abuse. In the global YouGov survey of more than 4,700 teenagers from across the world, a fifth of those who had experienced cyberbullying said it had made them consider suicide, and more than half said being taunted online was worse than being bullied in person. A quarter of those bullied closed down social media accounts and more than a fifth skipped school, the survey commissioned by Vodafone found. Of those who were bullied, almost 40% did not tell their parents, citing feelings of shame or fear. Researchers spoke to 13- to 18-year-olds from the UK, Germany, Italy, Spain, Netherlands, New Zealand, Greece, South Africa, US, Ireland and the Czech Republic. New Zealand had the highest number of teenagers who said they had experienced cyberbullying, followed by the US and Iceland.

Watch Full Episodes Online of The Boy in the Dress on PBS Use one of the services below to sign in to PBS: You've just tried to add this video to your Watchlist so you can watch it later. But first, we need you to sign-in to PBS using one of the services below. You’ll be able to manage videos in your Watchlist, keep track of your favorite shows, watch PBS in high definition, and much more! You've just tried to select this program as one of your favorites. Kelly Gallagher – Resources Part of the reason my students have such a hard time reading is because they bring little prior knowledge and background to the written page. They can decode the words, but the words remain meaningless without a foundation of knowledge. To help build my students’ prior knowledge, I assign them an "Article of the Week" every Monday morning. By the end of the school year I want them to have read 35 to 40 articles about what is going on in the world. It is not enough to simply teach my students to recognize theme in a given novel; if my students are to become literate, they must broaden their reading experiences into real-world text. Below you will find the articles I assigned* this year (2013-2014) to my students.

New York Times lesson plans Photo Do your students follow Humans of New York? The site and the related Tumblr and Facebook page created by the amateur photographer Brandon Stanton have millions of followers, and the “Humans of New York” book, published in October, landed in the No. 1 spot on the New York Times hardcover nonfiction best-seller list its first week on sale. As the Times article about the phenomenon puts it: Mr. SNN - Student News Net Thank you for visiting SNN. For 10 years, the same team of professionals has been producing SNN with a sharp focus on original, interesting content as both a mediator and motivator for learning. SNN has spent years studying the challenge of providing meaningful integration of technology in the classroom, conducting educational research, and working closely with teachers. The bottom line is that SNN today is aligned to basic principles of learning to support student achievement.

The Times in Plain English Something About Which We All Agree: Clutter is the Enemy Teenager's bedroom with clothes, books, and CDs thrown around. There is something about piles of clothing and other household goods. When closets, drawers, and shelves are overflowing, people use the dreaded word: clutter. In a Heartbeat This lesson plan is designed around a short film titled In a Heartbeat and the theme of love. Students learn and practice expressions using the word “heart”, watch a short film trailer, predict and write a story, watch and discuss a short film, and watch and discuss a video in which elderly people give their reactions to the short film. Language level: Intermediate (B1) – Upper Intermediate (B2) Learner type: Teens and adults

Literacy for Life Overview Student success must extend beyond the classroom. As a teacher, I search for lessons that bridge the school world and the world outside of school. The alarming news of students' lack of reading for pleasure prompts teachers of all levels to help students relate reading to their lives and fall in love with literacy. Using newspapers and magazines in the classroom entices students to build a lifelong reading habit. Teaching students to recognize bias in journalistic-style writing will help to create informed citizens. Best of Christmas, 1-6 – WebEnglish.se Related topics: Winter Wonderland 1-9, Best of Christmas, 6-9, Background Warm-up