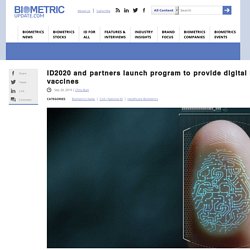 The program to leverage immunization as an opportunity to establish digital identity was unveiled by ID2020 in partnership with the Bangladesh Government’s Access to Information (a2i) Program, the Directorate General of Health Services, and Gavi, according to the announcement. Digital identity is a computerized record of who a person is, stored in a registry. It is used, in this case, to keep track of who has received vaccination. “We are implementing a forward-looking approach to digital identity that gives individuals control over their own personal information, while still building off existing systems and programs,” says Anir Chowdhury, policy advisor at a2i. Class-action suit: CPS in Illinois took newborns at birth after parents legally opted out of Vitamin K shot. Several parents in Illinois have filed a lawsuit against the state's Department of Children and Family Services, affiliated agents, doctors, nurses, and major hospitals who they say worked in coordination to either take their newborns or threatened to after they chose not to have the elective Vitamin K shot administered to their babies right after birth. 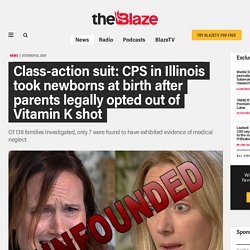 What are the details? One situation at the heart of the suit is that of Pastor Brian Bougher and his wife, Angela, whose fifth child, Glori, was seized by doctors for more than 12 hours after the couple chose to legally opt out of having their daughter being injected with Vitamin K immediately after being born. The couple maintains that they aren't anti-vaxxers (and the Vitamin K shot is not a vaccine), but they have chosen for religious reasons to not have any of their kids get the shot. Robert F. Kennedy, Jr. Publishes Censored Response to Kennedy Family's Criticisms on Vaccine Safety Which Exposes Industry Corruption.

CHD NOTE: In early May 2019, Politico Magazine published an article written by three of Robert F. 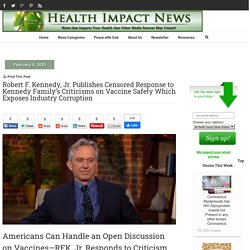 Kennedy, Jr.’s relatives, criticizing his advocacy for safe vaccines. After numerous requests, Politico magazine has refused to publish his response. by Robert F. Kennedy, Jr.Children’s Health Defense Three of my Kennedy relatives recently published an article criticizing my advocacy for safe vaccines. Our contentious family dispute highlights the fierce national donnybrook over vaccinations that has divided communities and raised doubts about the Democratic Party’s commitment to some of its defining values: abhorrence of censorship, wariness toward excessive corporate power, support for free speech, religious freedom, and personal sovereignty over our bodies, and the rights of citizens (codified in the Nuremberg Code and other treaties to which we are signatories) to decline unwanted government-mandated medical interventions.

Vaccin3. The "Open Question" On Vaccines and Autism. Sharyl Attkisson is an investigative correspondent for CBS News. 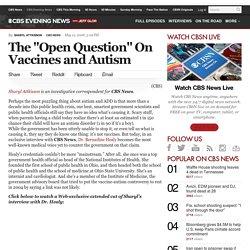 Perhaps the most puzzling thing about autism and ADD is that more than a decade into this public health crisis, our best, smartest government scientists and public health officials still say they have no idea what's causing it. Scary stuff, when parents having a child today realize there's at least an estimated 1 in 150 chance their child will have an autism disorder (1 in 90 if it's a boy). While the government has been utterly unable to stop it, or even tell us what is causing it, they say they do know one thing: it's not vaccines. But today, in an exclusive interview with CBS News, Dr. Bernadine Healy becomes the most well-known medical voice yet to counter the government on that claim.

The Hepatitis B Vaccine Currently In Use By 97 Countries Killed 69 Infants During Testing Trials. We're creating viewer supported news. 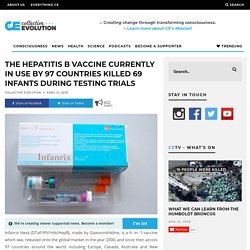 Become a member! Infanrix Hexa (DTaP/IPV/Hib/HepB), made by Glaxosmithkline, is a 6- in- 1 vaccine which was released onto the global market in the year 2000, and since then across 97 countries around the world including Europe, Canada, Australia and New Zealand. It aims to protect against Diphtheria, Tetanus, Pertussis, Polio, Hib & Hepatitis B. It was added to the UK vaccination schedule on 1st August 2017, with the sole purpose of introducing Hepatitis B into routine infant vaccinations.

It is scheduled to be given at 8, 12 & 16 weeks of age and is to be administered alongside other recommended vaccines from the NHS Immunisation Schedule at age appropriate appointments. World Renowned Scientists Have Their Lab Shut Down After Troublesome Vaccine Discovery. We're creating viewer supported news. 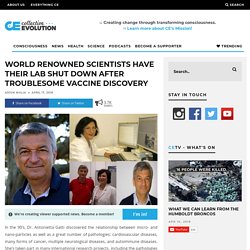 Become a member! In the 90’s, Dr. Antonietta Gatti discovered the relationship between micro- and nano-particles as well as a great number of pathologies: cardiovascular diseases, many forms of cancer, multiple neurological diseases, and autoimmune diseases. She’s taken part in many international research projects, including the pathologies induced by depleted uranium, waste incineration, food polluted with inorganic particles, and more.

Currently, she is the coordinator of the Italian Institute of Technology’s Project of Nanoecotoxicology, called INESE. Dirty Vaccines: New Study Reveals Prevalence of Contaminants. Every Human Vaccine Tested Was Contaminated by Unsafe Levels of Metals and Debris Linked to Cancer and Autoimmune Disease, New Study Reports Researchers examining 44 samples of 30 different vaccines found dangerous contaminants, including red blood cells in one vaccine and metal toxicants in every single sample tested – except in one animal vaccine. 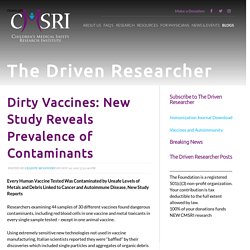 Using extremely sensitive new technologies not used in vaccine manufacturing, Italian scientists reported they were “baffled” by their discoveries which included single particles and aggregates of organic debris including red cells of human or possibly animal origin and metals including lead, tungsten, gold, and chromium, that have been linked to autoimmune disease and leukemia. Vaccine2. PowerHourVaccineInfoSheet. Dr. Mark Geier Wins Lawsuit Against Maryland Board of Physicians. By Brian ShilhavyEditor, Health Impact News A Maryland Circuit Court judge has ruled that the Maryland Board of Physicians, which stripped Dr. 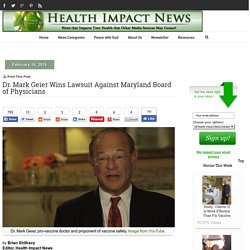 Mark Geier of his license to practice medicine back in 2011, acted illegally by humiliating Dr. Geier and his family publicly after they removed his medical license. In what is seen as an unprecedented action, Judge Ronald Rubin has ordered not only that $2.5 million in damages be awarded to the Geiers, but that half of that amount was to come out of the pockets of the members of the Maryland Board of Physicians, between $10,000 and $200,000 apiece, depending on their net worth. Dr. The case of Dr. Health Impact News recently reported about the case of Dr. The CDC is developing a nationwide “medical police state” program to track vaccine compliance; may lead to “medical kidnapping” of children.

By Lance D Johnson, Natural News: The Centers for Disease Control (CDC) is essentially the vaccine compliance and enforcement division of the pharmaceutical industry. 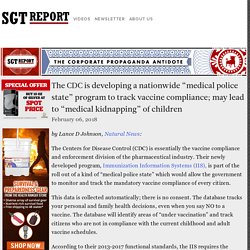 Their newly developed program, Immunization Information Systems (IIS), is part of the roll out of a kind of “medical police state” which would allow the government to monitor and track the mandatory vaccine compliance of every citizen. This data is collected automatically; there is no consent. The database tracks your personal and family health decisions, even when you say NO to a vaccine. The database will identify areas of “under vaccination” and track citizens who are not in compliance with the current childhood and adult vaccine schedules. Basic vaccine lies in the world of fake news. Basic vaccine lies in the world of fake news by Jon Rappoport January 29, 2018 “The combined death rate from scarlet fever, diphtheria, whooping cough and measles among children up to fifteen shows that nearly 90 percent of the total decline in mortality between 1860 and 1965 had occurred before the introduction of antibiotics and widespread immunization. 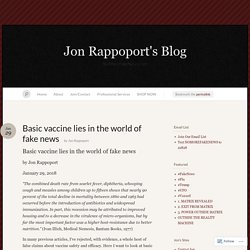 In part, this recession may be attributed to improved housing and to a decrease in the virulence of micro-organisms, but by far the most important factor was a higher host-resistance due to better nutrition.” (Ivan Illich, Medical Nemesis, Bantam Books, 1977) In many previous articles, I’ve rejected, with evidence, a whole host of false claims about vaccine safety and efficacy. Influenza Vaccine Facts They Don't Want You to Know! Influenza (flu) season is here. The media and CDC have been heavily pushing the influenza vaccine for over a month already. However, research has shown that this year’s flu shot is extremely toxic, ineffective and unsafe! Did you know that the 2013-2014 influenza vaccines contain dangerous levels of mercury?

The vaccine contains 25,000 times more mercury than the safety limit for drinking water! Did you know that infant and pediatric flu deaths were on the decline until 2003 when the pediatric influenza vaccine was introduced? One Radio Network / Alan Phillips - Attorney at Law on Vaccine Rights in America - March 6, 2018 - One Radio Network. Vaccine Rights Attorney There is a LOT of misinformation about the Conscience and Religious Freedom Division in the HHS Office for Civil Rights (OCR).

Alan Philips, a vaccine rights attorney joined us today to clear up the hype. There are very limited situations where this could apply to vaccines, it’s mostly about healthcare practitioners being required to participate in abortions against their will/religious beliefs. In brief: 1. 2. 3. ALERT: Vaccine advocate threatens mass murder “suicide mission” shooting at public autism event… “I’m gonna kill every single one of you f##kers… see you in Hell” (VIDEO)

(Natural News) Thanks to the extreme hatred being whipped up against autism truth advocates by vaccine propagandists such as Jimmy Kimmel, deranged science troll Dr. David Gorski and the “fake news” media that’s beholden to vaccine industry propaganda, vaccine pushers are now resorting to extreme threats of violence and mass shootings to try to silence vaccine truth researchers, authors and lecturers. In the last 48 hours, Dr. Suzanne Humphries, creator of the Honesty vs. The CDC, Vaccination and the Deep State. By Richard Gale and Gary Null, guest to Natural Blaze What if you were to know that a cabal of corrupt bureaucrats and scientists at the heart of the Centers for Disease Control (CDC) have known for almost two decades that vaccines, including the MMR, can lead to autism and other neurological disorders? Most people are unware that CDC is a militarized federal agency further influenced by private pharmaceutical interests. President Trump Drops NUCLEAR BOMB on Vaccine Mandates...

Wars are won by making political alliances. If our side EVER wants to win we need to understand that simple fact. By Kent Heckenlively, JD It’s not the differences with your allies which should worry you, but the DESTRUCTION your common enemy has planned for everybody who is even remotely on your side. With the establishment on Thursday of the Conscience and Religious Freedom Division in the Health and Human Services (HHS) Office for Civil Rights, Trump has laid the groundwork to smash every single vaccine mandate as well as turn BIG PHARMA into little pharma.

Vaccine Advocates Reportedly Funded by Vaccine Makers. In Part One of this analysis, we described how two highly biased non-profits—the American Academy of Pediatrics (AAP) and the Immunization Action Coalition (IAC)—have been attacking World Mercury Project and its Chairman, Robert F. Harvard Immunologist: Unvaccinated Children Pose ZERO Risk to Anyone and Here's Why. Dear Legislator: My name is Tetyana Obukhanych. Aluminum in brain directly linked to autism. Government Agencies ACTUALLY Admit Poisoning By Vaccines In ICD-9. Holistic Doctors Being Killed? GcMAF and Nagalase (Vaccines and Autism) In 2015, a pattern of poorly-explained deaths of holistic doctors began, spreading panic in this community. According to Erin Elizabeth of Health Nut News, the total number of unexpected deaths recently surpassed 80. The cases involving doctors who were studying GcMAF (Globulin component Macrophage Activating Factor) to treat patients with cancer and autism are seen to be the most significant.

Sweden Bans Mandatory Vaccinations Over 'Serious Health Concerns' The Truth Behind the Vaccines Coverup_1. 116 Million African Children to Get Same Polio Vaccines That Paralyzed Kids In India? – InvestmentWatch. Comply Or Lose Your Job – HR 1313 Would Force Vaccination and DNA Submission. This cutting-edge bandage could make flu shots a thing of the past. US Immunization Schedule Recommends 26 Vaccinations For Children Under 1, Highest In World And Ranks 34th In Infant Mortality. Mumps outbreak declared among GAY men in Los Angeles; many already “fully vaccinated” – NaturalNews.com. Brain Eating Bugs The Vaccine Connection. COUNTLESS TEENAGE GIRLS SUFFER PARALYSIS, BRAIN DAMAGE FROM FORCE-VACCINATION OF GARDASIL’S HPV “SHOT IN THE DARK”