Digital Inclusion and Entrepreneurship: Technology as a Medium to Cultivate Innovation in Product Development

How technology is enabling urban farming. If you’re reading this article, thank a farmer. 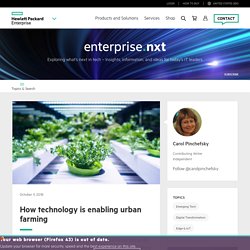 That’s because farming is the basis for all of civilization as we know it. The only things that Neolithic humans needed to create this explosion of population and ideas were seeds, soil, a sharp stick, and a snazzy rain dance. Today, 21st century technology has replaced those ancient ways. Drone used to pollinate Central New York apple orchard. Tech entrepreneurs set their sights on urban farming. In the workshop of clean technology startup incubator Greentown Labs outside of Boston, there’s a piece of equipment you would not have found a few years ago: an indoor garden. 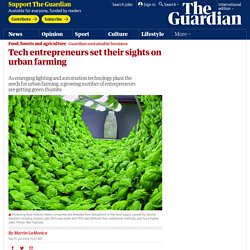 The garden is a testing lab for Grove Labs, a company designing an appliance to grow leafy green vegetables indoors. Its two founders, who conceived of the business while students at the Massachusetts Institute of Technology, envision people’s homes having “groves,” or spots to grow their own fresh food. The company, which recently raised $2m in “seedling” funding, says it intends to help people grow food productively at home using sensor-controlled gardens and smart phone apps.

The Grove Lab founders are among a growing number of entrepreneurs who are getting a green thumb. What Are the Applications of Blockchain in Agriculture? - Kryptographe. 5 Innovative Agricultural Practices That Are Changing the World. By Andy Heikkila Digitization in the modern age means that almost every contemporary field or industry is becoming more and more reliant on hardware connected to and, in some cases, controlled by software. 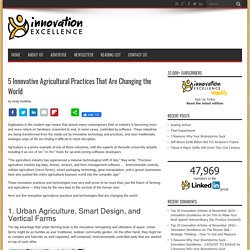 Smart Ag Announces Driverless Tractor Automation Platform - PrecisionAg. An Iowa technology company has unlocked the tremendous potential for automation in agriculture by developing the first cloud-based platform for driverless tractors, according to a press release from AgPR. 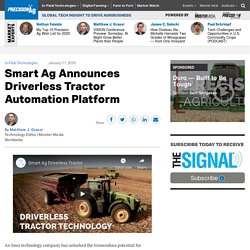 Smart Ag officials in Ames announced today they are releasing on a limited basis, the first application for the platform, called AutoCart. This software application fully automates a grain cart tractor, which provide farmers much needed assistance during the demanding harvest season. Colin Hurd, the founder and CEO of Smart Ag, said the innovative technology will allow farmers to automate their existing equipment and maximize its efficiency and capacity – regardless of manufacturer. “Farming should no longer be defined by what the equipment industry decides is better or more profitable.

We believe agriculture is best when farmers have choices,” Hurd said. Hacking a Cow's Gut Bacteria Could Make More Meat, Less Pollution. Humans are not unique for our often-lauded gut microbes; different species host a dizzying variety of microscopic organisms that are an integral part of digestion. 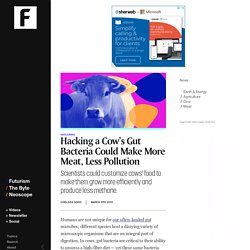 In cows, gut bacteria are critical to their ability to process a high-fiber diet — yet these same bacteria also produce methane, a potent greenhouse gas. However, scientists now think that it’s possible to alter cow microbiomes so that the animals produce more meat, and perhaps even less methane through their burps and farts. Tweaking cow microbiomes to make more meat on less food could make the meat industry more efficient and more profitable. 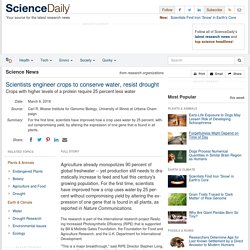 For the first time, scientists have improved how a crop uses water by 25 percent without compromising yield by altering the expression of one gene that is found in all plants, as reported in Nature Communications. The research is part of the international research project Realizing Increased Photosynthetic Efficiency (RIPE) that is supported by Bill & Melinda Gates Foundation, the Foundation for Food and Agriculture Research, and the U.K. Department for International Development. Geneticists Have Used CRISPR Gene Editing to Create Crops That Grow More Food. Better Crops, Better Yield Specifically, the researchers edited trait variations or major components known to affect yield rates in crops. 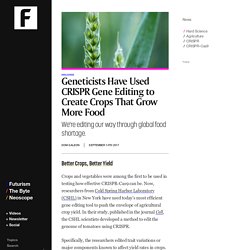 These traits include the size of the fruit, its branching architecture, and the overall shape of the plant. 5 Reasons Why Urban Farming Rocks: Apply Today to Win the $15k Gardens for Good Grant. From a few containers full of soil and seeds to acres of rooftop overflowing with greens, urban farming has taken the nation by storm—and we couldn’t be happier. 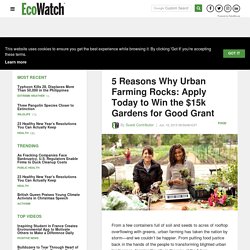 From putting food justice back in the hands of the people to transforming blighted urban landscapes, farming the city is the way of the future. Michigan Urban Farming Initiative volunteers. Gardens for Good winners in 2013. Urban farming is a growing movement, and here’s why it’s awesome: 1. It strengthens local economies by creating jobs and access to healthy food. 2. Urban food deserts are a serious issue facing many inner city communities. 5 Reasons Why Urban Farming Rocks: Apply Today to Win the $15k Gardens for Good Grant. What is product development? definition and meaning - BusinessDictionary.com. Proper product development ensures the end product will support all requirements while meeting all codes required of particular type of product. 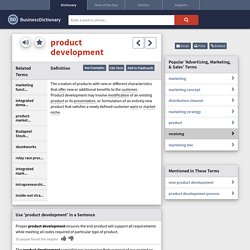 Questions and Answers about CRISPR. What is Digital Inclusion? The growth and widespread adoption of information and communications technology (ICT) has elevated the importance of digital literacy in our society. 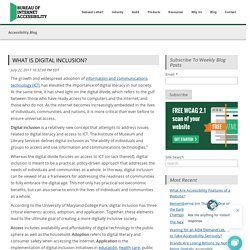 At the same time, it has shed light on the digital divide, which refers to the gulf between those who have ready access to computers and the internet, and those who do not. As the internet becomes increasingly embedded in the lives of individuals, communities, and nations, it is more critical than ever before to ensure universal access. Digital inclusion is a relatively new concept that attempts to address issues related to digital literacy and access to ICT. The Institute of Museum and Library Services defines digital inclusion as “the ability of individuals and groups to access and use information and communications technologies.” Whereas the digital divide focuses on access to ICT (or lack thereof), digital inclusion is meant to be a practical, policy-driven approach that addresses the needs of individuals and communities as a whole.