Pasta e Fagiole Recipe on Food52. Heidi Swanson's Chickpea Stew with Saffron, Yogurt, and Garlic. Every week -- often with your help -- Food52's Senior Editor Kristen Miglore is unearthing recipes that are nothing short of genius. 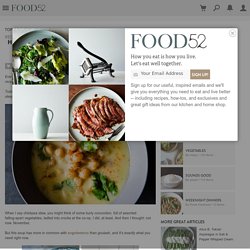 Jane Grigson's Celery Soup recipe on Food52.com. 5 Recipes to Put Winter Squash to Good Use. Put time into dinner now, and you can make it last forever -- or at least the whole week. 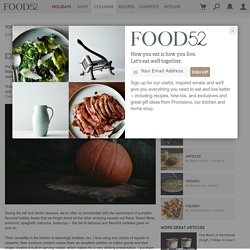 Welcome to Halfway to Dinner, where we show you how to stretch your staples -- or your seasonal produce -- every which way. Today: With the swift exit of summer and fall produce comes the introduction of a whole new cast of farmers market characters: winter squash. Eva Kosmas Flores at Adventures in Cooking has 5 ideas for putting it to good use. During the fall and winter seasons, we're often so bombarded with the assortment of pumpkin-flavored holiday treats that we forget about all the other amazing squash out there: Sweet Meat, butternut, spaghetti, kabocha, buttercup -- the list of delicious and flavorful varieties goes on and on. Night Kitchens Cream Of Celery Soup Recipe. Luxurious 7-Vegetable and “Cheese” Soup. Grocery shopping while hungry – oh boy. 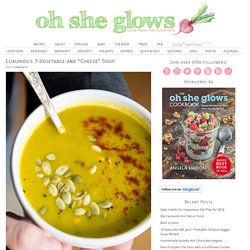 It seems to happen all too often, despite my best intentions. Sometimes, simply being in the proximity of tasty looking food makes me hungry. Ok, make that always. Last week, Eric and I were picking up some groceries at Whole Foods around dinnertime. Shopping at Whole Foods before dinnertime is Trouble with a capital T. Moral of the story: ALWAYS look on the top or bottom row at Whole Foods! Paul Bertolli's Cauliflower Soup recipe on Food52.com. Cooking is more fun with friends. 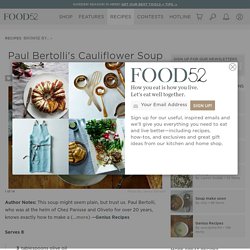 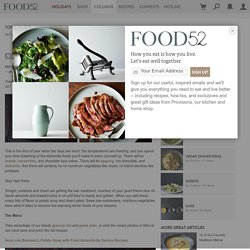 We hope you'll join us -- whether you're vegetarian all the time or just here and there. Today: A meatless meal that raises the question: is there anything a little bit of olive oil can't do? This is the time of year when the days are short, the temperatures are freezing, and you spend your time dreaming of the elaborate foods you'll make to warm yourself up. Spiced Pumpkin and Coconut Milk Soup - Dance of Saucepans. Photo by Cristina Gonzalez. 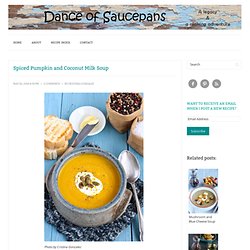 Pumpkin Soup Recipe. Halloween offer of 25% off ad spots on my blog here with the code Happy25. 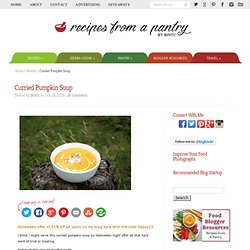 I think I might serve this curried pumpkin soup on Halloween night after all that hard work of trick or treating. And probably also on bonfire night. Not only that, but I have managed to convince my American friend to serve this up for Thanksgiving Day. Oh and guess who has been invited along for that? Black bean pumpkin soup. I know this sounds like the tiniest of triumphs in a world of people who have respectable accomplishments to be proud of, but nonetheless, it brings me great pleasure to announce that I have found a pumpkin soup that meets my approval. 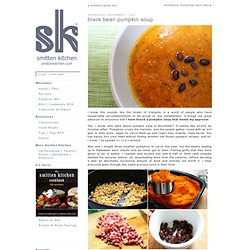 Yes, I know, who talks about pumpkin soup in November? It seems like strictly an October affair. Pumpkins crowd the markets, and the people gather round with an evil glint in their eyes, eager to carve them up and roast their innards, mwa-ha-ha. You can barely turn your head without finding another half dozen pumpkin recipes, and oh, I know, I’ve spread my share around. Alex and I bought three smallish pumpkins to carve this year, but the weeks leading up to Halloween were chaotic and we never got to them. Copycat Panera Broccoli Cheese Soup. Copycat Panera Broccoli Cheese Soup. Broccoli-Cheese Soup. Broccoli-cheese soup is my life. 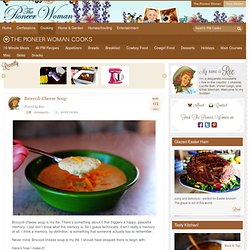 There’s something about it that triggers a happy, peaceful memory. I just don’t know what the memory is. Panera Bread Broccoli Cheddar Soup Copycat Recipe. Seriously you guys. 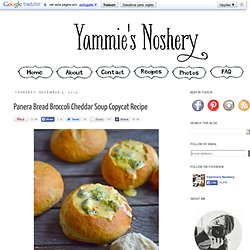 This is exactly like Panera Bread's broccoli soup. It is so thick, rich, creamy, and cheesy. The bread bowl is so crackly on the outside and tender and soft on the inside. It brings a tear to my eye. Balthazar’s cream of mushroom soup. A couple months ago, I briefly mentioned making a wild mushroom soup from Gourmet magazine that was, you know, good, but also, eh. But shame on me, really, because last year we found the perfect, best-ever, fail-proof, tastiest recipe so why did I fall for the shiny new thing? Homemade Cream of Chicken Soup. Homemade Cream of Chicken Soup. Pumpkin Soup with Smoked Paprika Recipe.

2 Melt butter in a 4-quart saucepan over medium-high heat. Chipotle Pumpkin Soup Recipe. If canned chipotle in adobo is not available, you can use chipotle powder, start with one teaspoon and increase to taste. If chipotle powder is not available, use 1/2 teaspoon of regular chili powder, increasing to taste, and a dash of liquid smoke. Note that fresh pumpkins vary in their moisture content, so you may need to add more liquid, either water or stock, to get to the consistency you want, depending on how thick or thin you would like your soup to be.

Ingredients Garnishes: Chipotle Pumpkin Soup Recipe. African Chicken Peanut Stew Recipe. Like peanut butter? Chicken? Then this African chicken peanut stew by Hank is for you. Perfect for chilly weather. ~Elise Chicken, sweet potatoes and peanuts are one of those magical flavor combinations that make me feel all warm and happy, especially because I never would have thought to do this 20 years ago, when I met some fellow University of Wisconsin students from Ghana who made this stew at their apartment. The best way to make this stew is with two whole stewing hens—older chickens available at Asian and Latin markets. What is a little unusual about how you make the stew is that you first brown the chicken and then stew it on the bone. Sweet potatoes or yams are a must in the African version, but if you hate them, use regular potatoes or turnips.

The stew is supposed to be pretty spicy, so I normally use a lot of hot sauce thrown in at the end of the cooking. Homemade Cream of Mushroom Soup » TaylorMade Market. I never order soup in a restaurant.. Just not really a soup kind of gal, but I never realized how popular soup was until I opened a restaurant. I could count on 2 hands the different soups I made before opening TaylorMade Market. Now I have lost count. New Tab. Carrot & coriander soup. Creamy Caramelized Leek Soup with Maple Glazed Bacon. I don’t even want to tell you about soup right now. I mean, it’s almost April so shouldn’t we be discussing swimsuits and popsicles and glitter eggs and all things warm weather?

Um. Yes. We should. But we’re not. Okay okay. Focaccia Bread Recipe. One of my favorite store-bought (or, I suppose, bakery-bought) splurges is focaccia bread. Focaccia Bread Recipe. The Rising Spoon: Emeril's Crock-Pot Beef Stew: 2.0. One Pluviophile Living in a Hot, Hot State If you don't know me personally, it's likely you're not privy to this fact: I'm a rain person. No, that doesn't mean I'm made of rain (although we're all made of water), but that I love, love, love rain. Overcast skies and thunderstorms make me giddy. That said, it's pretty comical that I live in Texas now.

“Have some fesenjan,” my gracious host, Sargon, pointed in the direction of a wet mass of brownness in a ceramic bowl on the buffet table. A brief moment of awkwardness followed. The fact is — in terms of appearance, this thing could only be described as uninteresting at best and unappetizing at worst. Nestled between a platter of colorful assorted vegetables and a bowl of vibrant-colored saffron pilaf, the stew’s lack of aesthetics became even more pronounced which, in turn, made my reluctance to plunge the serving spoon — poised in mid-air — into it more justified.

“It’s good,” Sargon assured me. At that very moment, three things popped into my head: 1. it would be very rude of me to refuse the food which my host was recommending, 2. how awful of me to unfairly judge a stew who had never done anything to hurt me, and 3. doggone it, how many times in your life do you get invited to a Persian/Assyrian Christmas party?