1/31: Trump’s 3rd Chief of Staff Already Planning His Escape. Last December, after struggling to find someone willing to take on a job that ranks somewhere between coal miner and pet-food taster, Donald Trump gave up and awarded the thankless role of White House chief of staff to Mick Mulvaney. 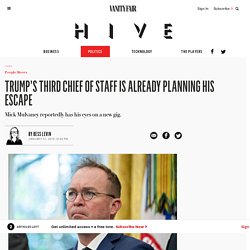 Though the gig was supposed to be on an “acting” basis, one might have thought Mulvaney would have lasted longer than six weeks before plotting ways to flee the scene. But, surprise! Per Politico: Mick Mulvaney, the acting chief of staff, is interested in succeeding Wilbur Ross as Commerce secretary, according to several people with knowledge of his plans. 1/28: Members of New Border Security Committee Took $$ from Private Prison PACs. When the longest government shutdown in U.S. history finally ended on Jan. 25, Congress created a House-Senate conference committee to come up with a border security funding deal. 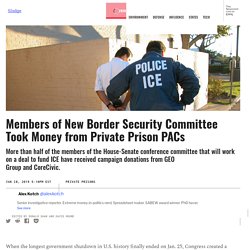 President Donald Trump ran for office on the creation of a wall along the U.S. -Mexico border and shut down the government when Democrats refused to pass legislation with billions of dollars to fund it late last year. The committee has until Feb. 15 to agree on a bill to fund the Department of Homeland Security (DHS). DHS operates Immigration and Customs Enforcement (ICE), which captures undocumented immigrants, often leading to their deportation. ICE does not operate its own detention centers and therefore awards lucrative contracts to private prison companies GEO Group and CoreCivic. Sludge has found that more than half of the 17 politicians who will determine appropriations for ICE have accepted campaign contributions from the PACs of one or both of these private prison giants. 1/27: Alan Moore’s ‘The Show’ Finished Filming, Hits Cinemas This Fall. This autumn sees the release of Alan Moore’s first movie, The Show. 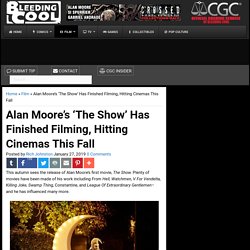 Plenty of movies have been made of his work including From Hell, Watchmen, V For Vendetta, Killing Joke, Swamp Thing, Constantine, and League Of Extraordinary Gentlemen– and he has influenced many more. He has turned down many other requests to write screenplays for producers and studios, only the unmade Fashion Beast making it to the typewriter – and eventually a comic book. But now, following his series of short films, Show Pieces, written for Mitch Jenkins to direct, and with Moore being cast as God – or at least a hellish working men’s club former comedian owner Mr Matterson who suggests that he is God – we are getting the full monty. Mitch Jenkins has just finished filming Alan Moore’s first movie made from his own screenplay written five years ago, The Show, set in and around Moore’s home town of Northampton, which transforms itself into the hellish Nighthampton. And, he already has the TV spinoff in mind:

1/25: What the Roger Stone Indictment Left Out: How He Helped Russia Attack the 2016 Election. Lynne Sladky/AP Looking for news you can trust? 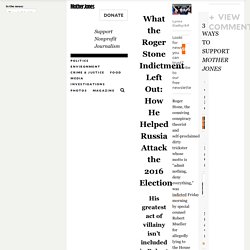 Subscribe to our free newsletters. Roger Stone, the conniving conspiracy theorist and self-proclaimed dirty trickster whose motto is “admit nothing, deny everything,” was indicted Friday morning by special counsel Robert Mueller for allegedly lying to the House intelligence committee about his efforts to interact with WikiLeaks during the 2016 presidential campaign. 1/25: Billionaires start to lose their luster. 1/24: Senate votes down two bills to end shutdown after Trump agrees to postpone State of the Union PDF. 1/23: Upcoming Senate votes to end shutdown: A closer look.

1/20: MLK 2019: A tale of two Kings. "I knew that I could never again raise my voice against the violence of the oppressed in the ghettos” MLK said in 1967, “without first having spoken clearly to the greatest purveyor of violence in the world today: my own government.” 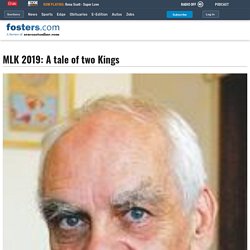 Last week, that government – our government – passed a resolution in the House of Representatives rejecting “White nationalism and White supremacy as hateful expressions of intolerance.” Intended as a repudiation of Iowa’s Rep. Steve King, the resolution, which didn’t mention King by name, failed to directly confront his long, ugly history of racist rhetoric and associations and failed to directly confront the pernicious persistence of racism in America of which Steve King is but one reflection. That government resolution – anodyne and carefully worded and avoiding the words "racist" or "racism" – passed by a vote of 424-1 on the 90th anniversary of the Rev.

Dr. Complicit with war crimes and the embrace of murders, tyrants and dictators. The Rev. Dream. 1/18/19: Brazil probe finds suspect deposits in Bolsonaro son's account. 1/18: Acting AG Whitaker's wife sends email to reporter claiming Mueller probe is 'wrapping up' 1/8: FACT CHECK: Oval Office Pitch For A Border Wall. Share on TwitterShare on FacebookShare on Reddit Share on linkedinShare by Email Pool Getty Images President Trump speaks to the nation in his first-prime address from the Oval Office of the White House on Tuesday. 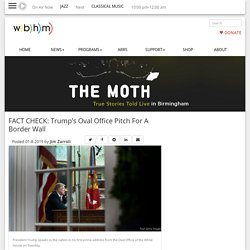 President Trump used his first prime-time address from the Oval Office to make the case for his controversial border wall. The president’s demand for $5.7 billion in wall funding — and Democrats’ opposition — has led to a partial shutdown of the federal government. Here we check some of the arguments made by the president and top Democrats in their response.

1/17: The circular firing squad: Mueller targets turn on each other. Rudy Giuliani sent an unmistakable message Wednesday night: It’s everyone for themselves. 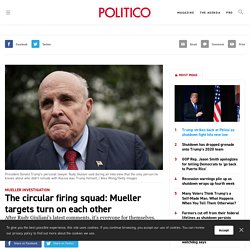 During a CNN interview, President Donald Trump’s personal lawyer blurted out that the only person he knows about who didn’t collude with Russia was Trump himself. 1/16: New Prime Inc. v Oliveira decision. 1/16: 'Unpresidented': Fake edition of Washington Post claims Trump resigned. 1/15: Unclear how long private funding can keep Statue of Liberty open. Tourists relieved that national monuments are still accessible from New Jersey despite federal shutdown Marsha Stoltz, Staff Writer, @Marsha_Stoltz The Statue of Liberty and Ellis Island will continue to remain open even as the federal government shutdown approaches its fourth week with no end in sight, officials said Tuesday. 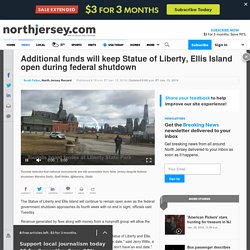 Revenue generated by fees along with money from a nonprofit group will allow the parks to operate, the National Park Service said. It is unclear how long the additional funding will keep the Statue of Liberty and Ellis Island's Immigration Museum open. "We have no expiration date," said Jerry Willis, a parks spokesman. "It's a large fund, but it's not infinite. The Statue of Liberty-Ellis Island Foundation donated additional funds to help cover the costs of employees. 18 Photos. 1/15: Court Blocks Trump Plan to Add Citizenship Question to 2020 Census. 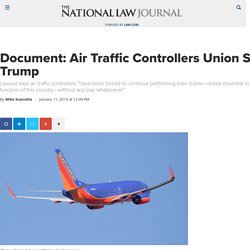 Benefits of a Digital Membership: Free access to 5 articles* every 30 days Access to the entire ALM network of websites Unlimited access to the ALM suite of newsletters Build custom alerts on any search topic of your choosing Search by a wide range of topics *May exclude premium contentAlready have an account? 1/11: Cortez quotes Alan Moore, secures nerd vote for eternity. 1/10: NC county commission loses suit to hold prayer before each public meeting, must pay ACLU fees. 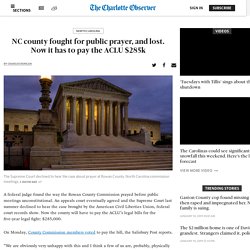 The new legislation would protect federal workers and their families from foreclosures, evictions and loan defaults during a government shutdown. “While the President and Senate Republicans struggle to get their act together, real people are suffering,” said Sen. Schatz. “As we enter the 19th day of President Trump’s temper tantrum over his vanity wall, hundreds of thousands of hard-working federal employees are facing real hardships as mortgage, rent, and student loan payments come due,” said Sen. “Across 800,000 kitchen tables today, hardworking people are trying to figure out how to pay bills and provide for their families without an income,” said Rep.

Cosponsors of Schatz’s bill in the Senate include U.S. “Federal workers are already suffering the consequences of the government shutdown,” said Sen. 1/9: Dems Introduce Bill to Protect Fed Employees from Foreclosure, Eviction, &Other Defaults During a Shutdown. 1/7: 24 Native Americans from Montana, mostly women, went missing during 2018.

In 2018 alone, more than two dozen Native Americans -- the majority of them women -- went missing in sparsely populated Montana, according to US Senator Jon Tester. "We're here today because we have an epidemic on our hands," Tester said during a Senate Indian Affairs Committee hearing last month. "Native Americans in Montana and across this country are dealing with violence at a much higher rate than the rest of the population ... you cannot set foot in Indian country without hearing a heartbreaking story about this growing problem. "Twenty-four doesn't sound like a lot, but in a state of a million people if you (projected) that out through the (overall) population, that would be a ton of folks," he added.

1/6/19: Snoop Dogg's Message to Furloughed US Government Workers. Getting to Know You: Rahaf Mohammed al-Qunun. 1/5/19: Mueller's Investigation Grand Jury Granted 6-Mo Extension. The grand jury in Robert Mueller’s probe into allegations of Russian interference in the 2016 presidential election, and any Russian government links to the Donald Trump campaign, has been extended by six months. The jury was impaneled on June 6, 2017, with its term set to expire this weekend.

1/4: Trump officials may receive huge raises while govt workers remain unpaid. The Washington Post reports that without legislation to continue a pay-cap it appears senior Trump officials including Vice-President Pence will receive pay raises. The raises appear to be an intended consequence of the shutdown: When lawmakers failed to pass bills on Dec. 21 to fund multiple federal agencies, they allowed an existing pay freeze to lapse. Congress enacted a law capping pay for top federal executives in 2013 and renewed it each year. The raises will occur because that cap will expire without legislative action by Saturday, allowing raises that have accumulated over those years but never took effect to kick in, starting with paychecks that will be issued next week.

Cabinet secretaries, for example, would be entitled to a jump in annual salary from $199,700 to $210,700. Deputy secretaries would be entitled to a raise from $179,700 to $189,600. Earn your stripes in cybersecurity with this training bundle WriterDuet Pro helps screenwriters collaborate online Words on paper. 1/3: Nancy Pelosi Just Outlined Her Agenda for the Most Diverse Congress Ever.

Thank you, Leader McCarthy. I look forward to working with you in a bipartisan way for the good of our country, respecting the constituents who sent each of us here. Every two years, we gather in this chamber for a sacred ritual. Under the dome of this temple of our democracy, the Capitol of the United States, we renew our great American experiment. 1/3: GOP senator suggests Congress reopen govt even w/out funding huge wall to keep us out of Mexico.

1/1: Kim Jong-un hopes to extend high-stakes nuclear summitry w/Trump or else. North Korean leader Kim Jong-un has revealed his hopes to extend his high-stakes nuclear summitry with President Donald Trump into 2019, but also warns the US not to test North Koreans’ patience with sanctions and pressure. During his televised New Year’s speech, Kim said he’s ready to meet with Trump at any time to produce an outcome “welcomed by the international community.” However, he said the North will be forced to take a different path if the United States “continues to break its promises and misjudges our patience by unilaterally demanding certain things and pushes ahead with sanctions and pressure.” Kim also said the United States should continue to halt its joint military exercises with ally South Korea and not deploy strategic military assets to the South.

Some analysts say North Korea has been trying to drive a wedge between Washington and Seoul while putting the larger burden of action on the United States. 1/1/19: Banksy Involved in a Cincinnati Banana Prank. 1/1/19: Trump freezes federal workers' pay in 2019. The move, which nixes a 2.1% across-the-board pay raise that was set to take effect in January, comes as hundreds of thousands of federal employees are expecting to begin the new year furloughed or working without pay because of a partial government shutdown. Trump told lawmakers he planned to scrap the 2019 pay bump for federal workers in August, saying the federal budget couldn't support it.