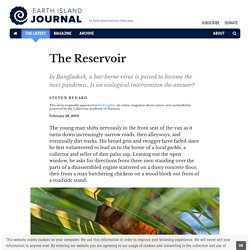 Is an ecological intervention the answer? Steven Bedard This story originally appeared in bioGraphic, an online magazine about nature and sustainability powered by the California Academy of Sciences. February 28, 2019 The young man shifts nervously in the front seat of the van as it turns down increasingly narrow roads, then alleyways, and eventually dirt tracks. Whether our guide’s waning confidence is due to the fact that he doesn’t know the area as well as he first let on, or because revealing a local secret to a vanload of outsiders might be frowned upon isn’t clear.

The gachhi we’re searching for is not just any sap collector. In 2005, scientists drew a link between this nearly universally loved local delicacy and Nipah virus encephalitis, a disease that has killed nearly 75 percent of those who have contracted it since 2001, when Bangladesh’s first outbreak occurred. The team’s lead, Hossain M.

She laughs. NEJM 09/05/19 Transmission of Nipah Virus — 14 Years of Investigations in Bangladesh. HOPKINS BLOOMBERG PUBLIC HEALTH MAGAZINE - 2019 - Tracking the Nipah Virus. Long before dawn one August morning, Emily Gurley and her team set out for the roost site. 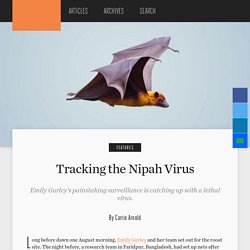 The night before, a research team in Faridpur, Bangladesh, had set up nets after the fruit bats flew off to forage. The nets caught about a dozen bats returning to the roost; now, Gurley and her colleagues gathered to collect samples from them. It was all part of a new endeavor to get one step ahead of a virus that can kill up to 90% of those infected with a terrifying combination of encephalitis and pneumonia. Despite the best tricks science had up its sleeve, the world’s epidemiologists always remained one step behind.

Scientists have been playing catch-up since they detected the first Nipah virus outbreak in Malaysia in 1998. Now, thanks to a $10 million grant from DARPA that seeks to keep U.S. soldiers safe from global infectious threats, Gurley has a chance to get ahead of Nipah. We live in a viral world. “I didn’t know much about the virus, but neither did anyone else in the world,” she says. CDC EID - JANV 2019 - Isolation and Full-Genome Characterization of Nipah Viruses from Bats, Bangladesh. Danielle E. 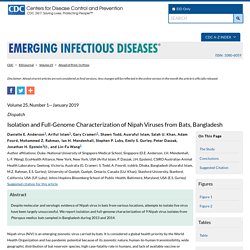 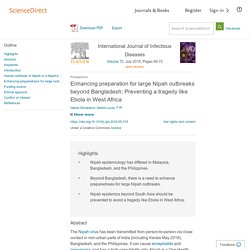 The epidemiological link was from fruit bats infecting pigs that then served as an amplifier host and infected humans through close contact. Person-to-person transmission was rarely documented, and no further human cases have been reported from either country. Detailed analyses of the environmental changes that triggered this outbreak connecting wildlife (bats), livestock (pigs), and humans were reported (Pulliam et al., 2012, Daszak et al., 2013).

This triad of human, animal, and environmental health (One Health) makes Nipah virus outbreaks a prime example of what we have termed the associated pan-epidemic Anthropocene (Lucey et al., 2017). A ‘Nipah belt’ has been described across the western part of Bangladesh (Hahn et al., 2014). J Infect Dis. 2018 Jan 17. Characterization of the spatial and temporal distribution of Nipah virus spillover events in Bangladesh 2007 - 2013. CDC EID - DEC 2006 - Foodborne transmission of Nipah virus, Bangladesh. Stephen P. 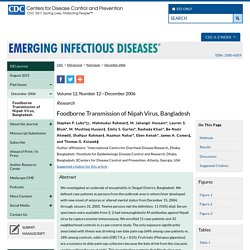 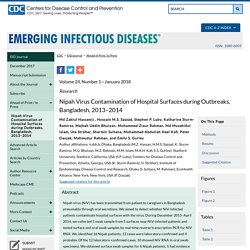 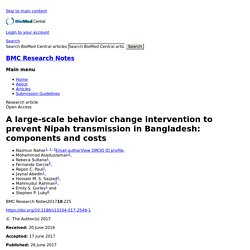 To scale these interventions up to 30 districts in Bangladesh where human infections with NiV have been identified, we estimated a cost of $2.6 million US$ for the “no raw sap” and $3.5 million US$ for the “only safe sap” intervention. NiV usually affects impoverished rural communities in Bangladesh, thus, affected families often experience a severe social and financial crisis [24, 25]. NiV kills people and leaves survivors with permanent neurological sequelae, similar to those experienced by some survivors of Japanese encephalitis [26, 27].

Sixty-one percent of NiV cases affected males with a mean age of 27 [3] who could be the main wage earners of the family. Most died [3], and those that survived could not continue to work due to the neurological effects of NiV. CDC EID - Volume 22, Number 4—April 2016. Au sommaire notamment: Nipah Virus Transmission from Bats to Humans Associated with Drinking Traditional Liquor Made from Date Palm Sap, Bangladesh, 2011–2014. M. 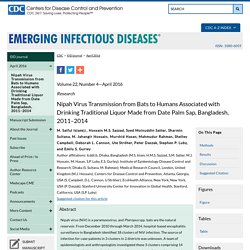 Saiful Islam. PLOS 09/11/15 Raw Sap Consumption Habits and Its Association with Knowledge of Nipah Virus in Two Endemic Districts in Bangladesh. Abstract Human Nipah virus (NiV) infection in Bangladesh is a fatal disease that can be transmitted from bats to humans who drink contaminated raw date palm sap collected overnight during the cold season. 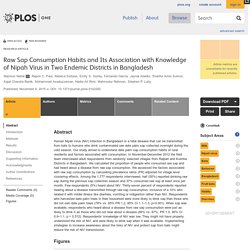 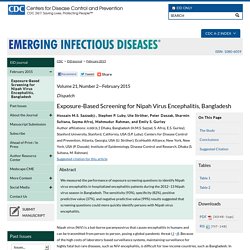 Neurology Asia 2004; 9 : 33 – 37 A report of 4 patients with Nipah encephalitis from Rajbari district, Bangladesh in the January 2004 outbreak – guatemalt

Everyone who got infected, died. “Only by stopping the consumption of the raw sap, can this disease be stopped. Despite our many attempts at raising awareness, people are ignoring the warnings and as a result, are getting infected,” warned Health Minister A.F.M. Ruhal Haque. Palm tree sap, often served fresh, is a popular drink in rural areas. Six people from the northern Joypurhat District have died thus far in 2012 and 24 during the same period in 2011. “In the last two years, the mortality rate has been 100 percent.