In 2015, Corinthian Colleges collapsed and left deceived students stuck with debt but no degrees.

In the wake of the scandal, the Obama administration created a new team within the Department of Education – the Student Aid Enforcement Unit – to police the billions in grants and loans administered each year. By the time Obama left office, the unit had a dozen attorneys and investigators working around the clock.

Betsy DeVos, daughter-in-law of Amway's billionaire co-founder, Richard DeVos, was nominated by Obama's successor to serve as the 11th Secretary of the US Department of Education. The Devos family were staunch supporters of Michigan's Republican Party with a solid history of investments in their state's for-profit educational systems. Devos, herself, had shown enormous success in destroying the rules and protections that had long been put in place to strengthen Michigan's public schools and teachers. Therefore, teachers' unions and public-school advocates expressed concerns about putting her in charge of the entire national public school system. Despite deep opposition by House Democrats, on February 7th 2017, DeVos was confirmed by the Senate by a 51–50 margin, with Vice President Mike Pence breaking the tie in favor of her nomination.

DeVos spent the last three years sabotaging the investigations unit to make sure scam artists and predatory for-profit schools get a free pass.


One of the main targets of the investigative team was DeVry Education Group. In 2016, DeVry settled with the Department of Education and the Federal Trade Commission and agreed to pay $100 million in damages to the students it defrauded and deceived. When DeVos arrived on the scene, the investigations office was looking into a number of for-profit giants, including DeVry, for deceptive practices, claims about graduates getting jobs and misleading advertising.4

DeVos quickly sabotaged the investigations by reassigning and marginalizing staff, and instructing them to narrow their focus. Today, only three investigators remain, processing applications and engaging in small compliance inquiries. Worst of all, DeVos actually hired the former DeVry dean Julian Schmoke, to oversee the new, toothless investigation team.5

House progressives are fighting back. 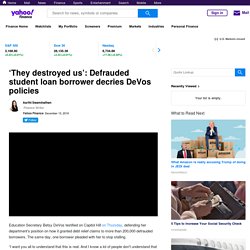 The same day, one borrower pleaded with her to stop stalling. “I want you all to understand that this is real. And I know a lot of people don't understand that this is real,” Keishana Mahone said, speaking at a meeting organized by the American Federation of Teachers (AFT). “They changed our lives. They destroyed us. 12/11/19: Betsy DeVos unveils new student loan forgiveness 'methodology.' Critics call it 'bad math' and 'mystifying.' The Education Department (ED) released a new “methodology” for how the department assesses potential debt relief claims from more than 200,000 defrauded student borrowers. 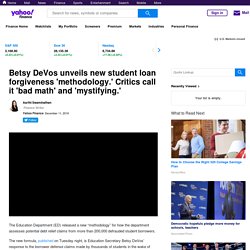 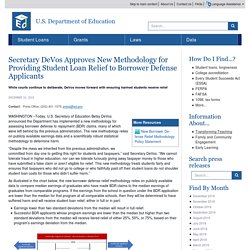 Secretary of Education Betsy DeVos announced the Department has implemented a new methodology for assessing borrower defense to repayment (BDR) claims, many of which were left behind by the previous administration. The new methodology relies on publicly available earnings data and a scientifically robust statistical methodology to determine harm. “Despite the mess we inherited from the previous administration, we committed from day one to getting this right for students and taxpayers,” said Secretary DeVos. “We cannot tolerate fraud in higher education, nor can we tolerate furiously giving away taxpayer money to those who have submitted a false claim or aren’t eligible for relief.

This new methodology treats students fairly and ensures that taxpayers who did not go to college or who faithfully paid off their student loans do not shoulder student loan costs for those who didn’t suffer harm.” Borrowers did not have Direct Loans related to the claim. 9/20/19: Reps. Pressley, Shalala, and Tlaib introduce the Protecting Student Aid Act of 2019. 9/3/19: DeVos imposes tougher debt relief standards for student borrowers alleging fraud. In her first significant act as Education Secretary more than two years ago, Betsy DeVos said she planned to overhaul an Obama administration student loan rule designed to protect borrowers defrauded by their college. 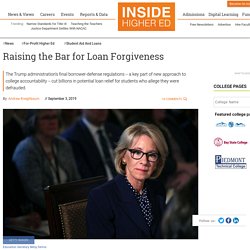 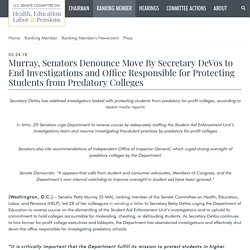 “It is critically important that the Department fulfill its mission to protect students in higher education, particularly when they rely on federal student aid,” wrote the Senators. In addition to Murray, the letter was signed by U.S. Full text of the letter below and PDF HERE. May 23, 2018 U.S. 4/30/18: Blumenthal and Senators Raise Concerns over For-Profit College Industry Lobbyist's "Oversight" Role at Dept of Ed.

Monday, April 30, 2018 [WASHINGTON, DC] – Ten senators wrote Secretary of Education Betsy DeVos raising serious concerns about Diane Auer Jones, a former high-powered lobbyist and consultant for the for-profit college industry who serves as a senior advisor in the Department of Education overseeing regulations, administrative matters, and other high stakes enforcement actions faced by the same for-profit colleges she formerly worked with or represented. 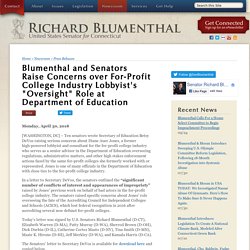 Jones is one of many officials in the Department of Education with close ties to the for-profit college industry. In a letter to Secretary DeVos, the senators outlined the “significant number of conflicts of interest and appearances of impropriety” raised by Jones’ previous work on behalf of bad actors in the for-profit college industry. Today’s letter was signed by U.S. Stop Betsy DeVos from sabotaging investigations. In 2015, Corinthian Colleges collapsed and left deceived students stuck with debt but no degrees. 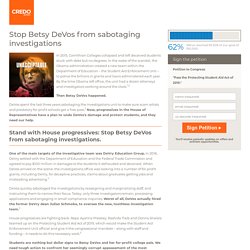 In the wake of the scandal, the Obama administration created a new team within the Department of Education – the Student Aid Enforcement Unit – to police the billions in grants and loans administered each year. By the time Obama left office, the unit had a dozen attorneys and investigators working around the clock.1,2. 10/21/19: DeVos held in contempt of court in student-loan forgiveness dispute. 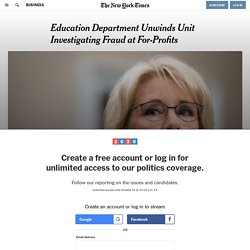 Trump’s victory, some employees openly worried about the fate of the investigative unit, and policies quickly changed with the new administration, according to the current and former employees. Communication with outside groups now required special approval, including with state attorneys general, who had been partners in identifying cases, and federal agencies like the Consumer Financial Protection Bureau, which had been aggressively monitoring a number of for-profit colleges. Without permission, team members could not contact schools or other parties to request documents, an essential part of making a case, which effectively halted investigative work. Ms. Hill, the Education Department spokeswoman, said the department was “focused on weeding out bad actors” across higher education, “not capriciously targeting schools based on their tax status.”

Mr. The officer told him, according to Mr. 12/15/16: DeVry Agrees to $100 Million Settlement with FTC. DeVry University and its parent company have agreed to a $100 million settlement of a Federal Trade Commission lawsuit alleging that they misled prospective students with ads that touted high employment success rates and income levels upon graduation. 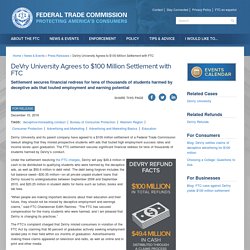 The FTC settlement secures significant financial redress for tens of thousands of students harmed by DeVry’s conduct. Under the settlement resolving the FTC charges, DeVry will pay $49.4 million in cash to be distributed to qualifying students who were harmed by the deceptive ads, as well as $50.6 million in debt relief. The debt being forgiven includes the full balance owed—$30.35 million—on all private unpaid student loans that DeVry issued to undergraduates between September 2008 and September 2015, and $20.25 million in student debts for items such as tuition, books and lab fees. 10/13/16: U.S. Dept of Ed Reaches Settlement with DeVry University Over Job Placement Claims. The U.S. 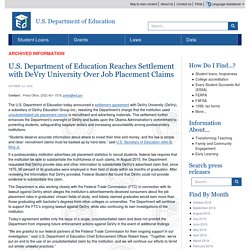 Department of Education today announced a settlement agreement with DeVry University (DeVry), a subsidiary of DeVry Education Group Inc., resolving the Department’s charge that the institution used unsubstantiated job placement claims in recruitment and advertising materials. This settlement further enhances the Department’s oversight of DeVry and builds upon the Obama Administration’s commitment to protecting students, safeguarding taxpayer dollars and increasing accountability among postsecondary institutions. “Students deserve accurate information about where to invest their time and money, and the law is simple and clear: recruitment claims must be backed up by hard data.” said U.S.

Secretary of Education John B. King Jr. If a postsecondary institution advertises job placement statistics to recruit students, federal law requires that the institution be able to substantiate the truthfulness of such claims. Specifically, the agreement requires DeVry to: 1/27/16: Devry Limitation Notice.