The Russkies and Rog

Footnote: The Day Before Roger Stone Received a Pre-Written Pardon, He Lied about the Ongoing Investigation into His Conspiracy with Russia. As I noted here, Roger Stone’s pardon appears to have been all packaged up, covering only the crimes for which he has already been found guilty, before Billy Barr left DOJ and the pardons were rolled out. 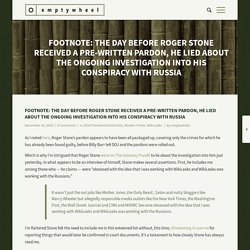 Which is why I’m intrigued that Roger Stone went on The Gateway Pundit to lie about the investigation into him just yesterday. In what appears to be an interview of himself, Stone makes several assertions. First, he includes me among those who — he claims — were “obsessed with the idea that I was working with WikiLeaks and WikiLeaks was working with the Russians.”

It wasn’t just the nut jobs like Mother Jones ,the Daily Beast , Salon and nutty bloggers like Marcy Wheeler but allegedly responsible media outlets like the New York Times, the Washington Post, the Wall Street Journal and CNN and MSNBC became obsessed with the idea that I was working with WikiLeaks and WikiLeaks was working with the Russians. He says that this passage proves that: Legal experts argue Roger Stone should be prosecuted in New York State. Roger Stone Comes Unhinged In New Deposition Footage. The Big Winner in Trump’s Commutation of Roger Stone Is, Of Course, Trump. Mueller reminds us that Roger Stone is still a convicted felon, no matter what Trump tweets. You really should read the whole thing, if only because in Trump’s America, it’s hard to keep track of all of his bad acts. 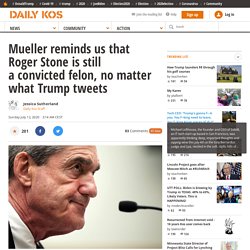 Again, Mueller recaps the investigation, with a focus on Stone, in an extremely snackable way after conceding that he felt “compelled to respond both to broad claims that our investigation was illegitimate and our motives were improper, and to specific claims that Roger Stone was a victim” of the Special Counsel’s Office. After reiterating that “Roger Stone remains a convicted felon, and rightly so,” Mueller quickly establishes the facts . Mueller then catalogues the end results of the investigation, noting that Russian interference was found, even if the SCO never could quite prove that the Trump campaign was involved. He adds up the indictments and convictions and plea bargains. In a few broad strokes, Mueller then details what the sartorially-challenged Stone did. 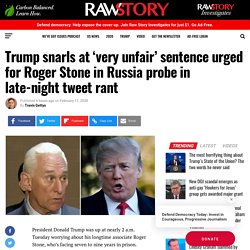 Tuesday worrying about his longtime associate Roger Stone, who’s facing seven to nine years in prison. Federal prosecutors called for a higher-end sentence for Stone, who was convicted of lying to Congress and tampering with a witness related to his efforts to learn about hacked Democratic emails during the 2016 election. “This is a horrible and very unfair situation,” Trump tweeted at 1:48 a.m. “The real crimes were on the other side, as nothing happens to them. Cannot allow this miscarriage of justice!” Roger Stone Convicted Of All The Crimes. Roger Stone (Photo by Drew Angerer/Getty Images) Robert Mueller got him, you guys. 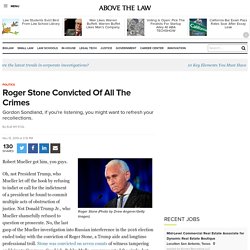 Oh, not President Trump, who Mueller let off the hook by refusing to indict or call for the indictment of a president he found to commit multiple acts of obstruction of justice. Roger Stone Trial Ends, Rick Gates Testifies That Trump Was In On Wikileaks Dump. On Tuesday, the prosecution rested in the Roger Stone trial after putting on one final witness: Rick Gates, former partner with Paul Manafort, consultant to the Trump campaign through the inaugural, and witness to the fact that Donald Trump was in on the Wikileaks dump before they made the emails public. 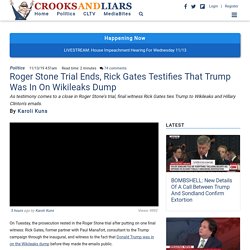 Roger Stone trial could rain fresh bombshells on the president: ‘Jurors are being told the case has something to do with Trump’ Judge Rejects Roger Stone's Wild Claims About Illegal Wiretaps. This should probably make Trump really nervous, but he's got so many other things to worry about right now. 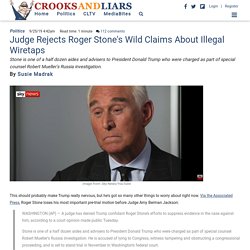 Via the Associated Press, Roger Stone loses his most important pre-trial motion before Judge Amy Berman Jackson: WASHINGTON (AP) — A judge has denied Trump confidant Roger Stone’s efforts to suppress evidence in the case against him, according to a court opinion made public Tuesday.Stone is one of a half dozen aides and advisers to President Donald Trump who were charged as part of special counsel Robert Mueller’s Russia investigation. Prosecutors filed a redacted version of their exhibit list for Roger Stone's trial in November — Stone is objecting to some of the govt's intended exhibits, including a chart showing the number of written comms he had with the Trump campaign in 2016 pic.twitter.com/mpk9Wj6tJm— Zoe Tillman (@ZoeTillman) September 23, 2019 This should probably make Trump really nervous, but he's got so many other things to worry about right now.

Judge warns Roger Stone not to treat trial like a 'public relations campaign' as she considers gag order. Flipping Roger Stone – CAFE. Roger Stone’s Last Dirty Trick. “Perhaps an impolite question,” I asked Roger Stone in a text message last month, “but what if something you envisioned well before almost anybody else and worked toward for more than a generation”—a Donald Trump presidency—”is also in the end the source of your legal demise?” 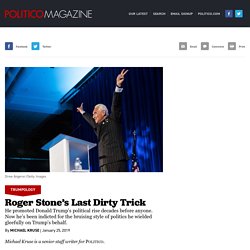 “That isn’t going to happen,” he responded, punctuating his missive with a yellow, laughing, smiley-face emoji. Story Continued Below Friday morning, it happened. Special counsel Robert Mueller’s indictment of Stone, charging him with false statements, witness tampering and obstruction of proceeding, indeed landed with a strangely poetic, practically Shakespearean boom, marking a karmic kind of culmination of one of Trump’s longest and most important relationships—an ignominious end, maybe, the result of an idea that was first and foremost his, starting nearly 40 years back. 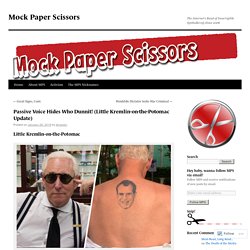 In my great haste yesterday, I missed something significant in the long indictment of Roger Stone. Everyone in the media pressed that someone in the campaign (probably Steve Bannon) directed Stone to contact “Organization One” (WikiLeaks), but wait! There’s something else there (emboldening mine): “After the July 22, 2016 release of stolen DNC emails by Organization 1, a senior Trump Campaign official was directed to contact STONE about any additional releases and what other damaging information Organization 1 had regarding the Clinton Campaign. Trump associate Roger Stone reveals new contact with Russian national during 2016 campaign.