The Disappearance Of The Children Of Viracocha - Cuzco: The City Which The Inca Found, Not Founded - Part 3. By: Brien Foerster - MessageToEagle.com - The greatest mystery about the Inca is not their accomplishments, but their origins. 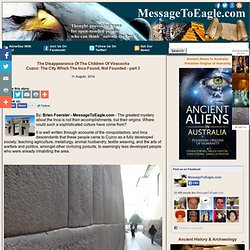 Ancient Astronauts From Toro Muerto - Peru. MessageToEagle.com - The petroglyphs of Toro Muerto cover an area, which is 200 meters wide and about two kilomoters long. 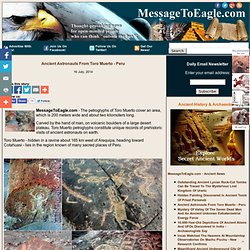 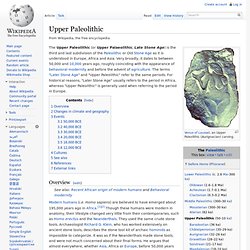 Very broadly, it dates to between 50,000 and 10,000 years ago, roughly coinciding with the appearance of behavioral modernity and before the advent of agriculture. The terms "Later Stone Age" and "Upper Paleolithic" refer to the same periods. For historical reasons, "Later Stone Age" usually refers to the period in Africa, whereas "Upper Paleolithic" is generally used when referring to the period in Europe. 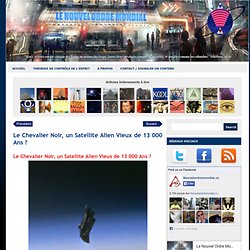 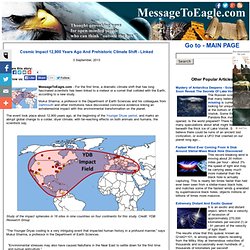 Some think the Pandora Box may soon be opened. Fascinating Gigantic Creatures Today Totally Extinct - 13,000 Years Ago Coexisted With Early Americans. MessageToEagle.com - The Ice Age world was, geologically, just a moment ago. 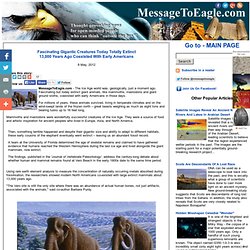 Indus Valley Script And Naga Stone Decoded - Scientists Say Graham Hancock Was Right! MessageToEagle.com - Scientists have struggled for a very long time to decipher the Indus Valley script, and now it would seem they have finally made some remarkable progress. 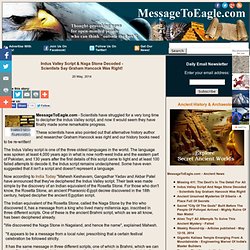 These scientists have also pointed out that alternative history author and researcher Graham Hancock was right and our history books need to be re-written! The Indus Valley script is one of the three oldest languages in the world. The language was spoken at least 4,000 years ago in what is now north-west India and the eastern part of Pakistan, and 130 years after the first details of this script came to light and at least 100 failed attempts to decode it, the Indus script remains undeciphered. Some have even suggested that it isn't a script and doesn't represent a language. Now according to India Today "Mahesh Keshavam, Gangadhar Yadav and Akbar Patel have announced that they've deciphered the Indus Valley script. Ancient Alien Amazing Evidence of Ancient Technology. 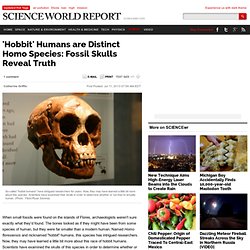 "Syria's Stonehenge" - Underground Tombs Alignments And Stone Circles Older Than Anything Seen In Europe. MessageToEagle.com - Today, it's the Syrian desert with unknown rock formations, stone circles, lines of stone and an ancient monastery with ancient tombs, corridors and walls covered with frescoes. 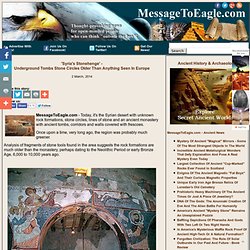 Once upon a time, very long ago, the region was probably much greener. Analysis of fragments of stone tools found in the area suggests the rock formations are much older than the monastery, perhaps dating to the Neolithic Period or early Bronze Age, 6,000 to 10,000 years ago. Deir Mar Musa; interior | 11th -13th century |Damascus | Photographer: James J. O’Donnell In Western Europe megalithic construction involving the use of stone has been dated to as early as ca. 4500 BC. Deir Mar Musa But to conduct archareological research in such region is not an easy task because the political conflict is tearing apart the Middle Eastern nation.

Research at the monastery has led to a growing research interest in the archaeology of Christianity and monotheism generally in the Holy Land. The 10,000 year-old Sumerian space maps, dictated by ET Homo Sapiens from Planet Nibiru. Excerpt from “Anunnaki: legacy of the Gods, techno-savvy ET s from the Planet Nibiru who came for gold, created us from their genome to work the mines, posed as Gods, decided to let us drown, but then decided to breed us to work for them.” 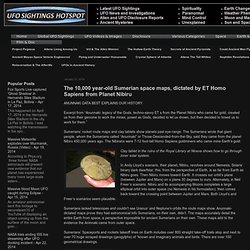 Sumerians’ rocket route maps and clay tablets show planets past eye-range. The Sumerians wrote that giant people, whom the Sumerians called “Anunnaki” or Those-Descended-from-the-Sky, said they came from the planet Nibiru 450,000 years ago. The Nibirans were 7-12 foot-tall Homo Sapiens goldminers who came mine Earth’s gold. Clay tablet in the ruins of the Royal Library at Nineva shows how to go through inner solar system. Not Atlantis, but significant nonetheless – Swedish divers find 11,000-year-old relics. Swedish divers have made a unique and rare discovery in the Baltic Sea – Stone Age artefacts left by Swedish nomads dating back 11,000 years. Media sites are going a little berserk with talks of a ‘Swedish Atlantis’ and the ‘oldest settlement in Sweden’.

However, a few facts need to be put straight.

The Labyrinth of Egypt has been described by a number of ancient writers such as Herodotus, Strabo, Diodorus, and Pliny. The labyrinth's age and ancient origins are unclear, but at the time of Herodotus' visit it was more than 1,300 years old. This legendary complex, named the "Labyrinth" by the ancient Greeks was legendary complex is believed to be an enormous collective tomb of the twelve kings who built it and a resting place for sacred crocodiles. Located at Hawara, about 90 km south of modern Cairo the complex contains secret chambers, passages shrines and tombs.

Herodotus wrote of the Labyrinth in the fifth century B.C. Giants Roamed The Earth Millions Of Years Ago. MessageToEagle.com - "On the earth there once were giants. " Greek poet Homer wrote in 400 B.C. People of Africa have memories of the giants who once lived on Earth. African legends describe these powerful beings as brave men who had shining eyes. Underwater Cities and Monuments: Submerged “8,000 Year Old Civilization” on Konkan Coast, India? « The s8intcom Blogger. Photo: 8000-year-old advanced civilization in Konkan Coast? One stretch of underwater wall off the Konkan Coast, western India.

The total wall exceeds 24 kilometers (approx. 15 miles) Source: dnaindia.com Published: Thursday, May 26, 2011 Are these man-made structures — walls? Did the Konkan coast from Shrivardhan in Raigad to Vengurla in Sindhudurga host a human habitat around 8000 years ago? A new archaeological discovery, below sea level along the Konkan coast, could give answers to these questions. Traces Of A 9,000-Year-Old Lost Unknown Civilization Discovered In Lake Huron, Michigan. MessageToEagle.com - Archaeologists exploring Lake Huron, one of the five Great Lakes of North America have found traces of an ancient lost civilization that is twice as old as Stonehenge and the Great Pyramids of Egypt. This time underwater archaeologists have another exiting opportunity to search for an ancient society that no-one suspected ever existed.

It all started when U.S. radar suddenly detected an odd structure at the bottom of Lake Huron. This was the first piece in a puzzle that led to a 9,000 year old discovery. The Weather Network reports that "underwater archaeologists have seemingly found what was once a dry land corridor connecting northeast Michigan and southern Ontario. Scientists say the main feature, dubbed the Drop 45 Drive Lane, is the most complex hunting structure found beneath the Great Lakes to date. Rare 11,000 Year-Old Artifacts Found Buried Beneath The Baltic Sea Could Re-Write History In The Region. MessageToEagle.com - Underwater archaeologists have made a sensational discovery. Buried deep beneath the Baltic Sea they found evidence of what could be the oldest ancient settlement in the Nordic region. Mysterious Ruins Of Nuevo Albergis - Clearly Seen On Google Earth But Undetectable From The Ground. MessageToEagle.com - Many fascinating archaeological discoveries were first stumbled upon by non-archaeologists or other amateurs exploring the terrain.