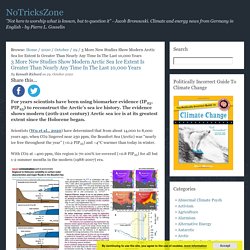 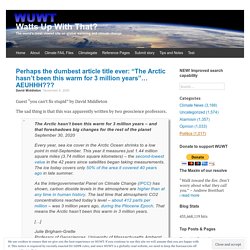 2 More Studies Affirm Nothing Unusual Or Unprecedented Is Occurring In Polar Climates Today. Only a few thousand years ago, when CO2 levels were both stable and low (~265 ppm), the (1) Arctic had far less ice and more vegetation than it does now and (2) the massive rate of ice melt in Antarctica rendered modern melt rates negligible by comparison. 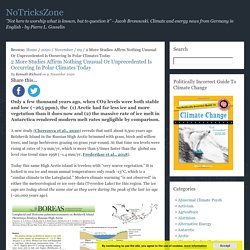 A new study (Cherezova et al., 2020) reveals that until about 6,500 years ago Bolshevik Island in the Russian High Arctic brimmed with grass, birch and willow trees, and large herbivores grazing on grass year-round. At that time sea levels were rising at rates of 7.9 mm/yr, which is more than 5 times faster than the global sea level rise trend since 1958 (~1.4 mm/yr, Frederikse et al., 2018). Today this same High Arctic island is treeless with “very scarce vegetation.” The climate changed rapidly alongside sea ice decline in the north.

Research News Researchers from the Niels Bohr Institute, University of Copenhagen have, in collaboration with Norwegian researchers in the ERC Synergy project, ICE2ICE, shown that abrupt climate change occurred as a result of widespread decrease of sea ice. 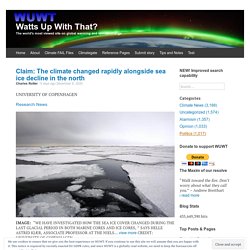 This scientific breakthrough concludes a long-lasting debate on the mechanisms causing abrupt climate change during the glacial period. It also documents that the cause of the swiftness and extent of sudden climate change must be found in the oceans. Scientific evidence for abrupt climate change in the past finally achieved During the last glacial period, app. 10,000 – 110,000 years ago the northern hemisphere was covered in glacial ice and extensive sea ice, covering the Nordic seas. Wild Horses And Mammoths Were Still Eating Grass Year-Round In The Arctic Until 2500-4000 Years Ago. Surface temperatures needed to have been much warmer than today to supply enough grass year-round for horses and mammoths to subsist in the Arctic through the Late Holocene. 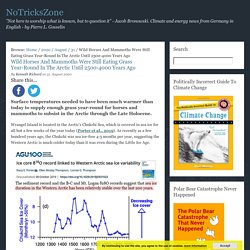 Wrangel Island is located in the Arctic’s Chukchi Sea, which is covered in sea ice for all but a few weeks of the year today (Porter et al., 2019). As recently as a few hundred years ago, the Chukchi was sea ice-free 4-5 months per year, suggesting the Western Arctic is much colder today than it was even during the Little Ice Age. Image Source: Porter et al., 2019 Mammoths lived in the Arctic until 3700 years ago Until the 1990s, it was thought the Earth’s last wooly mammoths went extinct during the Pleistocene-Holocene transition about 15,000 to 10,000 years ago. New Northern Hemisphere Temperature Reconstructions Are Devoid Of Michael Mann-Like Hockey Sticks. By Kenneth Richard on 27. 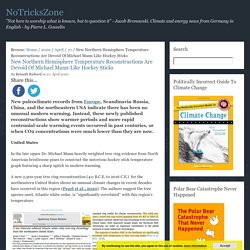 April 2020 New paleoclimate records from Europe, Scandinavia-Russia, China, and the northeastern USA indicate there has been no unusual modern warming. Instead, these newly published reconstructions show warmer periods and more rapid centennial-scale warming events occurred in past centuries, or when CO2 concentrations were much lower than they are now. United States In the late 1990s Dr. A new 2,500-year tree ring reconstruction (411 B.C.E. to 2016 C.E.) for the northeastern United States shows no unusual climate changes in recent decades have occurred in this region (Pearl et al., 2020). Image Source: Pearl et al., 2020 Scandinavia, Russia Another new dendroclimatology study (Shi et al., 2020) affirms Northern Eurasia (Sweden, Yamal) warmed 3 to 6 times faster during the 4th, 15th and 19th centuries than during the 1900s-2000s.

For example, the temperature record suggests it warmed 0.37°C to 0.85°C within the last century. Image Source: Shi et al., 2020 China. Dwarf Mammoths, Giant Camels, And Warmth-Demanding Plants Point To A 6-22°C Warmer-Than-Today Arctic. Several new studies use evidence from temperature-sensitive plant species and megafauna remains to reconstruct an Arctic climate that was 6°C to 22°C warmer than today when CO2 concentrations lingered near 300 ppm. 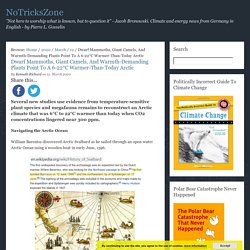 Navigating the Arctic Ocean William Barentsz discovered Arctic Svalbard as he sailed through an open-water Arctic Ocean using a wooden boat in early June, 1596. Image Source: Wikipedia. New Study: 6500 Years Ago The Western Barents Sea Was Ice-Free And 10°C Warmer Than 2015. By Kenneth Richard on 25. 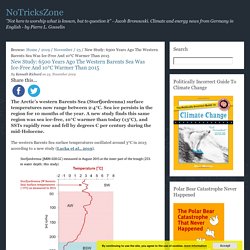 November 2019. The History Of The Arctic. In the distant past, palm trees grew in Greenland. 03 Dec 1922, Page 63 – The Washington Times at Newspapers.com Greenland wasn’t quite as far north 250 million years ago as it is now. 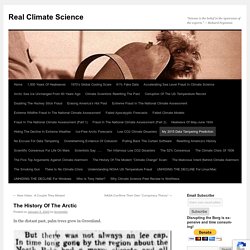 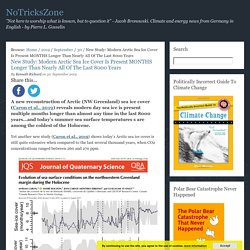 There was no ice cover in the Western Arctic for about 2 to 5 months of the year during the Little Ice Age (1500s-1700s C.E.). Arctic Sea Ice 8000 Years Ago less Than Half Of Today’s, Yet Polar Bears Thrived! New Paper: Arctic Sea Ice Was Far Less Extensive Than Today During The ‘Ice Free’ Early Holocene. By Kenneth Richard on 23. May 2019. Less Ice In Arctic Ocean 6000-7000 Years Ago. Less Ice In Arctic Ocean 6000-7000 Years Ago. Recent mapping of a number of raised beach ridges on the north coast of Greenland suggests that the ice cover in the Arctic Ocean was greatly reduced some 6000-7000 years ago. The Arctic Ocean may have been periodically ice free. ”The climate in the northern regions has never been milder since the last Ice Age than it was about 6000-7000 years ago. We still don’t know whether the Arctic Ocean was completely ice free, but there was more open water in the area north of Greenland than there is today,” says Astrid Lyså, a geologist and researcher at the Geological Survey of Norway (NGU).

Shore features Together with her NGU colleague, Eiliv Larsen, she has worked on the north coast of Greenland with a group of scientists from the University of Copenhagen, mapping sea-level changes and studying a number of shore features. ”The architecture of a sandy shore depends partly on whether wave activity or pack ice has influenced its formation. Historic Variations in Arctic Sea Ice – Part Two. Guest essay by Tony brown Foreword Note; Last year an edited version of this article appeared at Climate Etc. This new version contains numerous additional references, graphics, quotes, more historic detail and updates.

Giant Ancient Camel Roamed the Arctic. A cold-weather camel that lived 3.5 million years ago has been discovered in Canada’s High Arctic. The world was a very different place 3.5 million years ago. A land bridge connected Alaska and Russia. Our ancestors, the australopithecines, were first appearing in Africa. And giant camels roamed the Arctic, looking a whole lot like their desert-based descendants do today. That’s right—the shaggy animals that embody arid, sandy settings once thrived in decidedly chillier climes. Before the latest find, experts only knew of extinct camels as far north as Canada’s Yukon. Once the fragments were assembled like puzzle pieces, a cloven-hoofed limb resembling those of ancient camels began to take shape. Judging by the size of its leg, scientists concluded that the Arctic camel was about 30 percent larger than today’s desert varieties.

During the Ellesmere Island camel’s lifetime, temperatures in the Arctic were 14 to 22 degrees warmer than they are today, Rybczynski said. New Science: Arctic AND Antarctic Sea Ice More Extensive Today Than Nearly All Of The Last 10,000 Years. By Kenneth Richard on 18. A Geological Perspective on Arctic Sea Ice Extent (AKA PIP25: “Miracle on Ice”) Guest review article by David Middleton We’re often bombarded with headlines line this: New Arctic Study Finds Spring Sea Ice Melted 2 Months Earlier Than Today During Roman, Medieval Times. By Kenneth Richard on 16. New peer reviewed paper says "there appear to have been periods of ice free summers in the central Arctic Ocean" in the early Holocene, about 10-11,000 years ago.

New Science Affirms Arctic Region Was 6°C Warmer Than Now 9000 Years Ago, When CO2 Levels Were ‘Safe’ Unearthed new evidence (Mangerud and Svendsen, 2018) reveals that during the Early Holocene, when CO2 concentrations hovered around 260 ppm, “warmth-demanding species” were living in locations 1,000 km farther north of where they exist today in Arctic Svalbard, indicating that summer temperatures must have been about “6°C warmer than at present”.

Proxy evidence from two other new papers suggests Svalbard’s Hinlopen Strait may have reached about 5 – 9°C warmer than 1955-2012 during the Early Holocene (Bartels et al., 2018), and Greenland may have been “4.0 to 7.0 °C warmer than modern [1952-2014]” between 10,000 and 8,000 years ago according to evidence found in rock formations at the bottom of ancient lakes (McFarlin et al., 2018). In these 3 new papers, none of the scientists connect the “pronounced” and “exceptional” Early Holocene warmth to CO2 concentrations.

Mangerud and Svendsen, 2018. Study: Less Svalbard polar bear habitat during the early Holocene than now. Guest essay by Dr. Susan Crockford of Polar Bear Science. Arctic Ocean may have been covered by an ice shelf nearly double the size of Greenland’s ice sheet. An ice shelf over a kilometre thick once formed over the Arctic Ocean, a new study by researchers from the University of Sheffield has revealed. Inconvenient new study: Canadian Arctic had significantly warmer summers a few thousand years ago. Arctic Was An Open Sea In The Year 1122. Long Term Arctic Temperature Trends. By Paul Homewood. Alarmists Right On Schedule …. As predicted, climate experts have jumped into their next phase of nonsensical climate propaganda. There’s likely never been this little sea ice on the planet since human civilization began.Eric Holthaus.

New paleo reconstruction shows warmer periods in Alaska over the past 3000 years.