Filesystem - Why does lsof complain about tracefs? 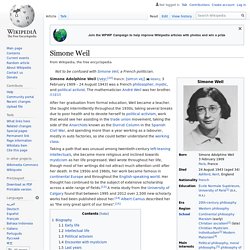 The mathematician André Weil was her brother.[11][12] After her graduation from formal education, Weil became a teacher. She taught intermittently throughout the 1930s, taking several breaks due to poor health and to devote herself to political activism, work that would see her assisting in the trade union movement, taking the side of the Anarchists known as the Durruti Column in the Spanish Civil War, and spending more than a year working as a labourer, mostly in auto factories, so she could better understand the working class. Taking a path that was unusual among twentieth-century left-leaning intellectuals, she became more religious and inclined towards mysticism as her life progressed. Biography[edit] Weil at age 13. Early life[edit] Intellectual life[edit] Political activism[edit] Chomsky On Anarchism. 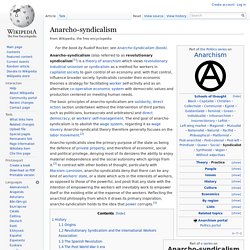 Syndicalists consider their economic theories a strategy for facilitating worker self-activity and as an alternative co-operative economic system with democratic values and production centered on meeting human needs. The basic principles of anarcho-syndicalism are solidarity, direct action (action undertaken without the intervention of third parties such as politicians, bureaucrats and arbitrators) and direct democracy, or workers' self-management. The Relevance of Anarcho-syndicalism, Noam Chomsky interviewed by Peter Jay. Meeting Spain's last anarchist. Syndicalist Party - Wikipedia. The Syndicalist Party (Spanish: Partido Sindicalista; Catalan: Partit Sindicalista) was a left-wing political party in Spain, formed by Ángel Pestaña in 1932. 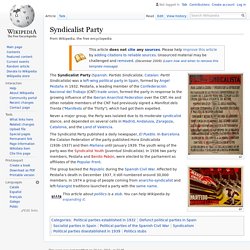 Pestaña, a leading member of the Confederación Nacional del Trabajo (CNT) trade union, formed the party in response to the growing influence of the Iberian Anarchist Federation over the CNT. He and other notable members of the CNT had previously signed a Manifest dels Trenta ("Manifesto of the Thirty"), which had got them expelled. Cipher Machines. Deprogram Yourself: 10 Fake Documents That Changed The World. Jenkins. Are we alone? Setting some limits to our uniqueness. Are humans unique and alone in the vast universe? 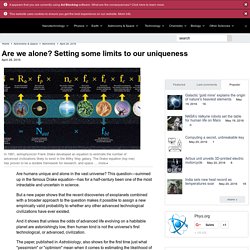 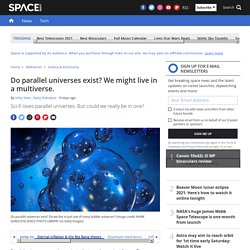 There are now some scientific theories that support the idea of parallel universes beyond our own. However, the multiverse theory remains one of the most controversial theories in science. Our universe is unimaginably big. Hundreds of billions, if not trillions, of galaxies spin through space, each containing billions or trillions of stars. Some researchers studying models of the universe speculate that the universe's diameter could be 7 billion light-years across. This single-celled, brainless slime can 'learn' without a nervous system. While intelligence can be an extremely complex thing to define, we can all agree that a prerequisite for being clever is having a brain - preferably with a nervous system attached. 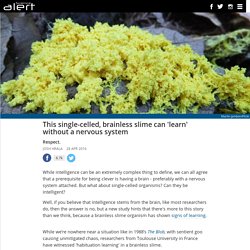 But what about single-celled organisms? Can they be intelligent? Well, if you believe that intelligence stems from the brain, like most researchers do, then the answer is no, but a new study hints that there's more to this story than we think, because a brainless slime organism has shown signs of learning. Eucalyptus. Some eucalyptus species have attracted attention from horticulturists, global development researchers and environmentalists because of desirable traits such as being fast-growing sources of wood, producing oil that can be used for cleaning and as a natural insecticide, or an ability to be used to drain swamps and thereby reduce the risk of malaria. 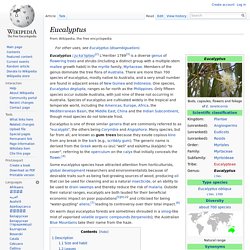 Outside their natural ranges, eucalypts are both lauded for their beneficial economic impact on poor populations[5][6]:22 and criticised for being "water-guzzling" aliens,[7] leading to controversy over their total impact.[8] Description[edit] Size and habit[edit] A mature eucalyptus may take the form of a low shrub or a very large tree. There are three main habits and four size categories that species can be divided into. Scientists have created the first ever porous liquid. You're probably familiar with porous rocks – rocks that can hold and filter liquids – and now scientists from Queen's University in Belfast have created a synthetic liquid with similar properties. 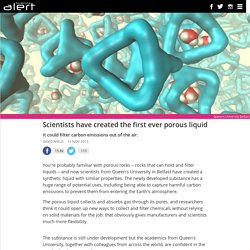 The newly developed substance has a huge range of potential uses, including being able to capture harmful carbon emissions to prevent them from entering the Earth's atmosphere. The porous liquid collects and absorbs gas through its pores, and researchers think it could open up new ways to collect and filter chemicals without relying on solid materials for the job: that obviously gives manufacturers and scientists much more flexibility. The substance is still under development but the academics from Queen's University, together with colleagues from across the world, are confident in the results they've seen so far.

Teddy Girls: The Style Subculture That Time Forgot. On reflection, the paring of the aristocratic flamboyancy of an Edwardian gent with the rebellious attitude of American rock and roll shouldn't have worked – but it did. 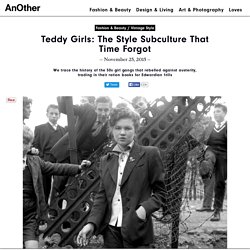 Sorry, but there are no giant caverns inside Rosetta comet. New Horizons sheds light on Pluto's floating hills. NASA has released a new image taken by the New Horizons spacecraft as it sped past the dwarf planet Pluto, displaying the locations of a number of "floating hills" composed of water ice. 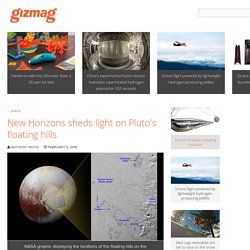 It is believed that these mobile peaks broke away from the highlands bordering a region known as Sputnik Planum, and subsequently carried with the flow of the nitrogen ice glaciers. The New Horizons spacecraft has already succeeded in discovering a wealth of unusual quirks in the geology of the dwarf planet, and it seems to be far from done. NASA scientists believe that the vast chunks of water, some of which measure several miles across, float on the denser nitrogen ice flows that carry the fragments to an unusual landscape characterized by cell-like formations.

As a side-effect of this mechanism, the water ice fragments are dragged to the edges of the cells, sometimes clustering in groups 12 miles (20 km) across. X-rays and nanoparticles combine to kill cancer deep in the body. Cancer may be terrifying, but cancerous cells aren't actually that difficult to kill. The tricky bit is doing so without killing the host or making them dreadfully ill in the process.

The key is treatments that only target the cancer cells while leaving the surrounding healthy tissue alone. By combining X-rays with nanoparticles, a team of researchers from the Centre for Nanoscale BioPhotonics (CNBP) in Australia has found a way of combating cancer deep inside the body in this way using a simple chemical. According to the CNBP, one chemical that cancer cells are particularly vulnerable to is singlet oxygen. Implantable device translates thought into action for people with spinal injuries.

Researchers in Australia have built an implantable brain-machine interface (BMI) that may give people with spinal cord injuries the ability to walk again using the power of their own thoughts. Not just for smart dead guys. Carmina Burana. The Wheel of Fortune from Carmina Burana Carmina Burana (/ˈkɑrmɨnə bʊˈrɑːnə/; Latin for "Songs from Beuern" ("Beuern" is short for Benediktbeuern) is the name given to a manuscript of 254[1] poems and dramatic texts mostly from the 11th or 12th century, although some are from the 13th century. The pieces are mostly bawdy, irreverent, and satirical.

They were written principally in Medieval Latin; a few in Middle High German, and some with traces of Old French or Provençal. Some are macaronic, a mixture of Latin and German or French vernacular. They were written by students and clergy when the Latin idiom was the lingua franca across Italy and western Europe for travelling scholars, universities and theologians.

German universities face funding fears as states scrap fees. The German city state of Hamburg has abolished tuition fees at its universities, a pattern being repeated across Germany Photograph: Fabian Bimmer/AP The German university fee system is on the brink of collapse after another state confirmed it would abolish charges for students following a change in local government. John Tyndall. John Tyndall FRS (2 August 1820 – 4 December 1893) was a prominent 19th century physicist. William Tyndale. X Club. The X Club was a dining club of nine men who supported the theories of natural selection and academic liberalism in late 19th-century England. Thomas Henry Huxley was the initiator: he called the first meeting for 3 November 1864.[1] The club met in London once a month—except in July, August and September—from November 1864 until March 1893, and its members are believed to have wielded much influence over scientific thought.

Naturalism. Naturalism. Hylomorphism. Hylomorphism is a philosophical theory developed by Aristotle, which conceives being (ousia) as a compound of matter and form. The word "hylomorphism" is a 19th-century term formed from the Greek words ὕλη hyle, "wood, matter" and μορφή, morphē, "form.

A Head-Up Display for Your Car That Lets You Race Yourself. GhostDash creates a virtual car to follow for those who want to improve their racing skills. Text 2 Mind Map – The text-to-mind-map converter. Physicists have finally proved the existence of a new superconductive state, first proposed 50 years ago. After 50 years, scientists have finally proved that superconductivity can exist inside a magnetic field.