The Metropolitan Museum of Art Puts 400,000 High-Res Images Online & Makes Them Free to Use 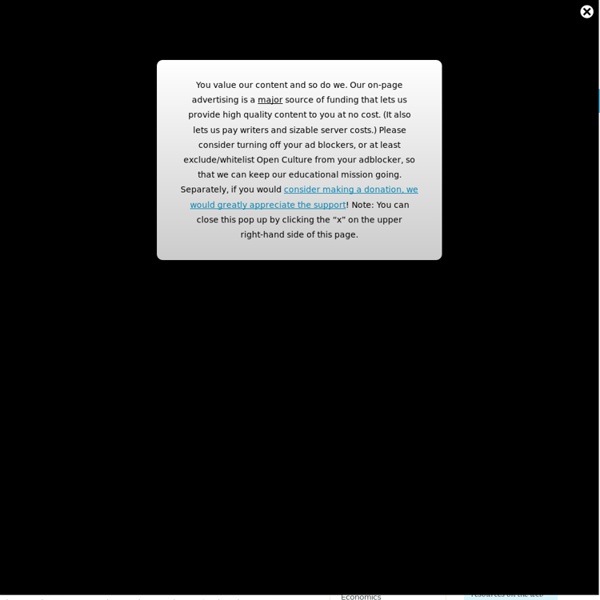 On Friday, The Metropolitan Museum of Art announced that "more than 400,000 high-resolution digital images of public domain works in the Museum’s world-renowned collection may be downloaded directly from the Museum’s website for non-commercial use." Even better, the images can be used at no charge (and without getting permission from the museum). In making this announcement, the Met joined other world-class museums in putting put large troves of digital art online. Witness the 87,000 images from the Getty in L.A., the 125,000 Dutch masterpieces from the Rijksmuseum, the 35,000 artistic images from the National Gallery, and the 57,000 works of art on Google Art Project. The Met's online initiative is dubbed "Open Access for Scholarly Content," and, while surfing the Met's digital collections, you'll know if a particular work is free to download if it bears the "OASC" acronym. In an FAQ, the Met provides simple instructions on how to figure that all out. Happy rummaging. via Kottke

Download 35,000 Works of Art from the National Gallery, Including Masterpieces by Van Gogh, Gauguin, Rembrandt & More As a young amateur painter and future art school dropout, I frequently found myself haunted by the faces of two artists, that famously odd couple from my favorite art history novelization—and Kirk Douglas role and Iggy Pop song—Lust for Life. Vincent van Gogh and Paul Gauguin, above and below respectively, the tormented Dutch fanatic and burly French bully—how, I still wonder, could such a pair have ever co-existed, however briefly? How could such beautifully skewed visions of life have existed at all?

Folger Shakespeare Library Puts 80,000 Images of Literary Art Online, and They're All Free to Use Has a writer ever inspired as many adaptations and references as William Shakespeare? In the four hundred years since his death, his work has patterned much of the fabric of world literature and seen countless permutations on stage and screen. Less discussed are the visual representations of Shakespeare in fine art and illustration, but they are multitude. In one small sampling, Richard Altick notes in his extensive study Paintings from Books, that “pictures from Shakespeare accounted for about one fifth—some 2,300—of the total number of literary paintings recorded between 1760 and 1900” among British artists. In the period Altick documents, a rapidly rising middle class drove a market for literary artworks, which were, “in effect, extensions of the books themselves: they were detached forms of book illustration, in which were constantly assimilated the literary and artistic tastes of the time.” The collection’s enormous archive of 19th century prints is an especial treat.

Internet Archive uploads more than 14 million public domain images to Flickr Kalev Leetaru programatically recovered all the images that were discarded by the OCR program that digitizes the millions of public domain books scanned by the Archive; these were cropped, cleaned up, and uploaded to Flickr with the text that appears before and after them, and links to see their whole scanned page. The resulting mosiac is just wonderful, like browsing Sean Tejaratchi's great zine Crap Hound, but weirder and more serendipitous. And each image is richly annotated with metadata, freely re-usable, and is a gateway to a book that you can have for free. What more could you ask for? Internet Archive Book Images

40 Free Sci-Fi Fonts for Designers The @font-face CSS rule makes it easier than ever to implement unique typefaces on your site without the need to rely on Google Fonts or any of the premium options. You may not want to use a custom font for your entire website but they can be used to great effect to make a heading stand out while retaining the ability to be read by search engines. Below is a selection of the finest typefaces from recognisable science fiction shows as well as a number of others that follow the same theme. Recommended Reading: High Quality Gothic & Horror Fonts Vector Freebies I’m on a roll ;-) Here’s another set of free vectors for you…no cu license needed, use them freely. Download HERE Like this: Like Loading... How to access a million stunning, copyright-free antique illustrations released by the British Library The odds are good that the US women’s gymnastics team will succeed today (Aug. 9) at defending their Olympic team title, starting at 3pm ET, with television viewing starting at 8pm in the US on NBC. The team finished qualifiers nearly 10 points ahead of second place China over the weekend. And while those scores will be scrapped during the finals, Team USA will certainly look to meet or top its performance.

Goes Creative Commons: 50 Great Images That Are Now Yours Wired.com photographers have the enviable job of shooting the coolest stuff and most intriguing people in the technology world. Now we’re giving away many of those photos to you, the public, for free. Beginning today, we’re releasing all Wired.com staff-produced photos under a Creative Commons (CC BY-NC) license and making them available in high-res format on a newly launched public Flickr stream. To mark our new licensing policy, we’ve compiled this gallery of 50 great pictures from our past stories. Included are portraits of Steve Jobs, Woz, Mark Zuckerberg, Steve Ballmer, Trent Reznor and JJ Abrams, to name a few. Plus, there’s a cross section of photo coverage from events like ComicCon, Maker Faire, CES and more.

Where to Find Old Films Online, Streamed Legally and for Free Squeak the Squirrel one of the many educational films available for free online Dave Kehr recently wrote in the New York Times about how websites like Netflix Instant and Hulu Plus are giving users access to hard-to-find films like Edgar G. Ulmer’s Ruthless (1948). Kehr cited Netflix’s collection of films from Paramount, Universal and Fox, as a chance for users to see movies that have not yet been released on home formats. Origins of American Animation, 1900-1921 The Library of Congress Motion Picture, Broadcasting and Recorded Sound Division, Library of Congress The Origins of American Animation collection has been migrated to an improved presentation and will no longer be updated in American Memory. Please visit the new presentation.