News Round up - Tech and Law - MS Lods 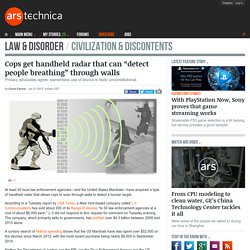 According to a Tuesday report by USA Today, a New York-based company called L-3 Communications has sold about 200 of its Range-R devices “to 50 law enforcement agencies at a cost of about $6,000 each.” L-3 did not respond to Ars’ request for comment on Tuesday evening. The company, which primarily sells to governments, has profited over $4.3 billion between 2009 and 2013 alone. A cursory search of federal spending shows that the US Marshals have also spent over $52,000 on the devices since March 2012, with the most recent purchase being nearly $6,000 in September 2014.

Neither the Department of Justice, nor the FBI, nor the Drug Enforcement Agency, nor the US Marshals immediately responded to Ars’ request for comment late Tuesday. The agency concluded: 'The Cloud' and Other Dangerous Metaphors. Contemporary ideas about data and privacy are tied up inextricably with language choices. 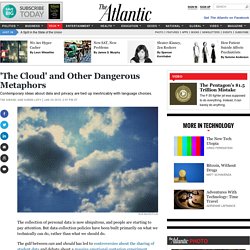 The collection of personal data is now ubiquitous, and people are starting to pay attention. But data-collection policies have been built primarily on what we technically can do, rather than what we should do. The gulf between can and should has led to controversies about the sharing of student data and debate about a massive emotional contagion experiment conducted on the News Feeds of close to 700,000 users on Facebook. Researchers of all stripes are scrambling to find a clear way forward in uncharted ethical territory. Newyorker. Almost every major terrorist attack on Western soil in the past fifteen years has been committed by people who were already known to law enforcement. 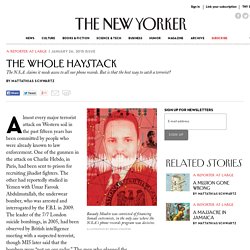 One of the gunmen in the attack on Charlie Hebdo, in Paris, had been sent to prison for recruiting jihadist fighters. The other had reportedly studied in Yemen with Umar Farouk Abdulmutallab, the underwear bomber, who was arrested and interrogated by the F.B.I. in 2009. The leader of the 7/7 London suicide bombings, in 2005, had been observed by British intelligence meeting with a suspected terrorist, though MI5 later said that the bombers were “not on our radar.” The men who planned the Mumbai attacks, in 2008, were under electronic surveillance by the United States, the United Kingdom, and India, and one had been an informant for the Drug Enforcement Administration. Abuse of Parliamentary procedure: introducing the Comms Data Bill into the Counter Terrorism and Security Bill. January 22, 2015. 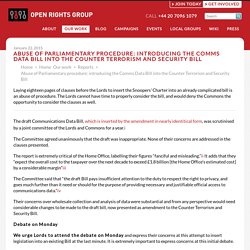 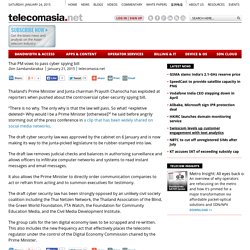 Aussie Travel Cover has hundreds of thousands of records stolen in hacking, policy holders not informed. By Will Ockenden and Benjamin Sveen Updated One of the country's largest travel insurance companies opted not to tell customers about a hacking that saw potentially hundreds of thousands of Australians' personal information stolen and parts of its customer database posted online. 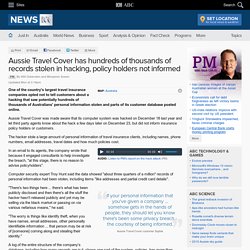 Aussie Travel Cover was made aware that its computer system was hacked on December 18 last year and let third party agents know about the hack a few days later on December 23, but did not inform insurance policy holders or customers. The hacker stole a large amount of personal information of travel insurance clients, including names, phone numbers, email addresses, travel dates and how much policies cost. Submissions. Privacy Commissioner hits out at ‘ill-defined’ data retention plans. The Victorian Commissioner for Privacy and Data Protection said the government’s data retention proposal was ill-defined and insecure in a submission to the parliamentary inquiry investigating the scheme. 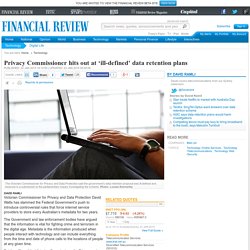 Photo: Louise Kennerley David Ramli Victorian Commissioner for Privacy and Data Protection David Watts has slammed the Federal Government’s push to introduce controversial rules that force internet service providers to store every Australian’s metadata for two years. The Government and law enforcement bodies have argued that the information is vital for fighting crime and terrorism in the digital age.

Scrap Data Retention Bill - Law Institute. The Federal Government’s controversial data retention legislation should be scrapped, according to the Law Institute of Victoria. 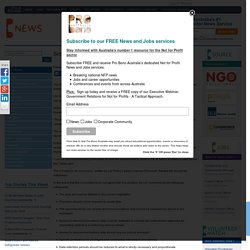 LIV President Katie Miller said the Government had effectively asked Parliament for a blank cheque which will be paid for by citizens with their privacy and their tax dollars. Charlie Hebdo and the security state. This is a guest post by Julia Powles, who researches and writes on law, science and technology at the University of Cambridge. 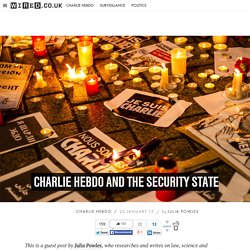 You can follow her on Twitter at @juliapowles. Two brothers and a running buddy destroy 17 people in the centre of Paris. It is ruthless and unflinching. Seventeen utter tragedies. Among the dead are five giants of French satire -- Cabu, Charb, Wolinski, Honoré, Tignous. Tech giants fear being captured by data-retention legislation. AIMIA, the digital policy group representing tech giants including Google, Twitter, Facebook, Microsoft, and eBay, has said that the government's mandatory data-retention legislation would be a disproportionate breach of the privacy of all Australians. 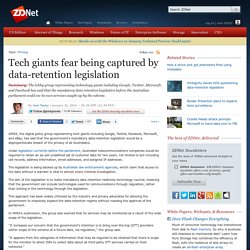 Under legislation currently before the parliament, Australian telecommunications companies would be required to retain an as-yet-undefined set of customer data for two years, not limited to but including call records, address information, email addresses, and assigned IP addresses. LNP politicians target Alan Jones. By Australian Associated Press Published: 08:43 GMT, 23 January 2015 | Updated: 08:43 GMT, 23 January 2015 Radio personality Alan Jones is facing more legal action from Queensland government ministers. Southern Cross TV breached privacy by filming through window for Today Tonight report. The media watchdog has found Southern Cross Television breached the codes of practice over a Today Tonight broadcast in Tasmania in which the current affairs show filmed through the window of a house, and broadcast the name of the street and suburb of the people involved in the story without permission.

The Australian Communications and Media Authority (ACMA) has today ruled that Southern Cross breached rules on personal information and privacy in a report on a dispute over the sale of a house on November 12, 2013. Every UK national newspaper editor urges Prime Minister to stop RIPA spying on journalists. Every national newspaper editor has backed the Press Gazette Save Our Sources campaign and signed a joint letter of protest to Prime Minister David Cameron over police spying on journalists' phone records. Around 100 editors have signed a letter co-ordinated by Press Gazette and the Society of Editors to warn that the draft code of practice on use of the Regulation of Investigatory Powers Act puts journalists' sources at risk. Politicians promised new controls in the code, but instead the new draft guidance states that police can continue to secretly view journalists' phone records provided they give “special consideration” to the “proportionality” of doing so.

The joint letter (full text below), submitted as part of the RIPA code consulation, states that the draft code “provides wholly inadequate protection for journalists’ sources”. The draft code appears to encourage police to access journalists' phone records by stating that they are not “privileged information". Journalism is not a crime. So why are reporters being referred to police? Journalism in Australia is not a crime. Despite this, journalists who have reported on immigration and asylum seeker issues have been referred to the Australian Federal Police for investigation in a series of attempts to prosecute confidential sources and whistleblowers. This is a move that should alarm all citizens. Companies suing critics. That's the real enemy of free speech. Fair copyright policy starts with transparency. Updating Operating System Now: Where's our Fair Use? “For copyright to achieve its purpose of encouraging creativity and innovation, it must preserve and promote ample breathing space for unexpected and innovative uses.”

Copyright law in Australia sometimes feels like OS updates on your phone. Can you copyright a tweet? Some weeks ago I was asked to comment on whether tweets are subject to copyright protection. Information is power: a revolution for the blind. ADA Forum Keynote speaker: Maryanne Diamond AO. Fox v. Dish Network Lays Some Aereo Concerns to Rest - Disruptive Competition Project.