Mind-Blowing Magic Magnets - Smarter Every Day 153. Omnifocal Glasses Could Focus On Whatever You're Looking At Automatically. Researchers Create Smallest Ever Lattice Structure. A team of scientists at the Karlsruhe Institute of Technology, Germany, has created a glassy carbon nanolattice with single struts shorter than 1 μm and diameters as small as 200 nm — the smallest lattice structure yet produced. 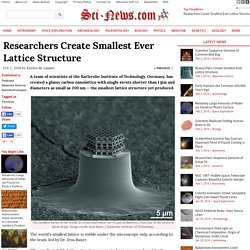 The smallest lattice in the world: its struts and braces are 0.2 µm in diameter; total size of the lattice is about 10 µm. Image credit: Jens Bauer / Karlsruhe Institute of Technology. The world’s smallest lattice is visible under the microscope only, according to the team, led by Dr. Jens Bauer. Carbon dioxide captured from air can be directly converted into methanol fuel. (Phys.org)—For the first time, researchers have demonstrated that CO2 captured from the air can be directly converted into methanol (CH3OH) using a homogenous catalyst. 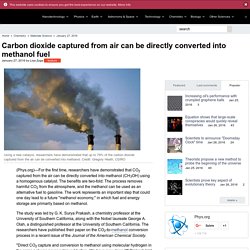 The benefits are two-fold: The process removes harmful CO2 from the atmosphere, and the methanol can be used as an alternative fuel to gasoline. The work represents an important step that could one day lead to a future "methanol economy," in which fuel and energy storage are primarily based on methanol. The study was led by G. K. Surya Prakash, a chemistry professor at the University of Southern California, along with the Nobel laureate George A. New Artificial Material Discovered That Can Produce A Self-Sustainable Source... Researchers at Florida State University have discovered a new artificial material that functions similar to the process of photosynthesis and can open up new avenues to create a sustainable energy source. 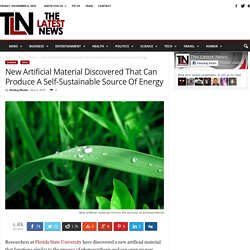 According to Jose L Mendoza-Cortes, Assistant Professor of Chemical Engineering, who led the study, this energy source will be self-sustainable. 3-D printed guide helps regrow complex nerves after injury. A national team of researchers has developed a first-of-its-kind, 3D-printed guide that helps regrow both the sensory and motor functions of complex nerves after injury. 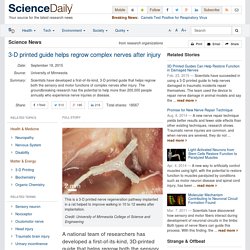 The groundbreaking research has the potential to help more than 200,000 people annually who experience nerve injuries or disease. Collaborators on the project are from the University of Minnesota, Virginia Tech, University of Maryland, Princeton University, and Johns Hopkins University. Molecular scientists unexpectedly produce new type of glass. When Prof. 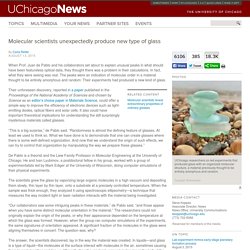 Juan de Pablo and his collaborators set about to explain unusual peaks in what should have been featureless optical data, they thought there was a problem in their calculations. In fact, what they were seeing was real. New CO2 recycler captures carbon dioxide from the atmosphere and turns it back into fuel. British Columbia start-up, Carbon Engineering is now developing technology to suck the carbon dioxide out of the atmosphere and save it for fuel and other applications. 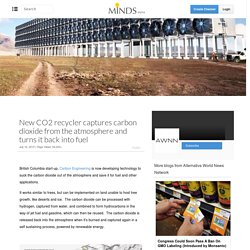 It works similar to trees, but can be implemented on land unable to host tree growth, like deserts and ice. The carbon dioxide can be processed with hydrogen, captured from water, and combined to form hydrocarbons in the way of jet fuel and gasoline, which can then be reused. The carbon dioxide is released back into the atmosphere when it's burned and captured again in a self sustaining process, powered by renewable energy.

How 16 Harvard Students Built the Ultimate BBQ Bot. Pitmasters, this will be hard to swallow: Some of the best smoked brisket comes out of Cambridge, Massachusetts. 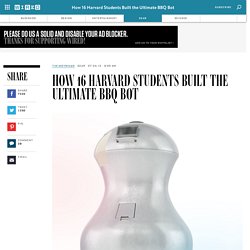 And it practically cooks itself. The secret is in the smoker. And the secret to the smoker is everything a group of 16 Harvard engineering students could do to turn the finicky art of smoking meat into a controlled, semiautomated science. In prototype form, the smoker looks like a combination of a giant pepper mill, a tandoori oven, and V.I.N.CENT from The Black Hole. Here Is the World's First Engine Driven by Nothing But Evaporation. It might not look like much, but this plastic box is a fully functioning engine—and one that does something no other engine has ever done before. 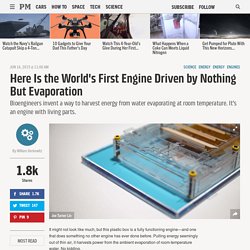 Pulling energy seemingly out of thin air, it harvests power from the ambient evaporation of room-temperature water. No kidding. A team of bioengineers led by Ozgur Sahin at Columbia University have just created the world's first evaporation-driven engine, which they report today in the journal Nature Communications. Using nothing more than a puddle of resting water, the engine, which measures less than four inches on each side, can power LED lights and even drive a miniature car.

Better yet, Sahin says, the engine costs less than $5 to build. Advertisement - Continue Reading Below. Chemists discover key reaction in sodium-air batteries. Chemists at the University of Waterloo have discovered the key reaction that takes place in sodium-air batteries that could pave the way for development of the so-called holy grail of electrochemical energy storage. 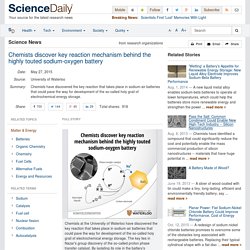 Researchers from the Waterloo Institute for Nanotechnology, led by Professor Linda Nazar who holds the Canada Research Chair in Solid State Energy Materials, have described a key mediation pathway that explains why sodium-oxygen batteries are more energy efficient compared with their lithium-oxygen counterparts. Understanding how sodium-oxygen batteries work has implications for developing the more powerful lithium-oxygen battery, which is has been seen as the holy grail of electrochemical energy storage. Bendy battery promises safe, speedy charging - BBC News. Scientists have built a flexible aluminium battery which they say could be a cheap, fast-charging and safe alternative to current designs. 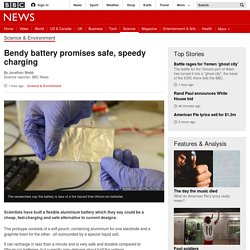 The protoype consists of a soft pouch, containing aluminium for one electrode and a graphite foam for the other - all surrounded by a special liquid salt. It can recharge in less than a minute and is very safe and durable compared to lithium-ion batteries, but currently only delivers about half the voltage. The work appears in the journal Nature.

The researchers say it has advantages over lithium-ion batteries, common in electronic devices like smartphones, as well as traditional alkaline batteries. TEDx - Printing Liquid Metal - Terminator. The German town Hamburg is using new paint against peeing in public. Limpet teeth set new strength record. 17 February 2015Last updated at 19:07 ET By Jonathan Webb Science reporter, BBC News The limpet has a tongue or 'radula' covered in tiny teeth that scrape away at the rock surface. The artificial skylight that simulates blue sky. The floor tiles that use foot power to light up cities. Six years ago, Laurence Kemball-Cook had a brainwave. A graduate of Loughborough university, he was doing a placement year at the energy company Eon, where he was given the job of finding a way to power street lighting with solar energy and wind.

Engineers will be able to add exciting new properties to composite materials–such as electromagnetism–by embedding droplets of liquid, and, on a purely scientific level, the research provides valuable insight into the nature of the material properties at small and large scales–how the relative strengths of a material at one size can be opposite to that at another size. “This is a great example of how different types of physics emerge at different scales,” Dr. Eric Dufresne, associate professor of mechanical engineering and materials science at Yale and principle investigator of the study, told The Speaker.

Engineers across the globe have been racing to design smaller, cheaper and more efficient rechargeable batteries to meet the power storage needs of everything from handheld gadgets to electric cars. In a paper published today in the journal Nature Nanotechnology, researchers at Stanford University report that they have taken a big step toward accomplishing what battery designers have been trying to do for decades – design a pure lithium anode.

All batteries have three basic components: an electrolyte to provide electrons, an anode to discharge those electrons, and a cathode to receive them. Today, we say we have lithium batteries, but that is only partly true. What we have are lithium ion batteries. New connection between stacked solar cells can handle energy of 70,000 suns. (Phys.org) —North Carolina State University researchers have come up with a new technique for improving the connections between stacked solar cells, which should improve the overall efficiency of solar energy devices and reduce the cost of solar energy production. The new connections can allow these cells to operate at solar concentrations of 70,000 suns worth of energy without losing much voltage as "wasted energy" or heat. Stacked solar cells consist of several solar cells that are stacked on top of one another.