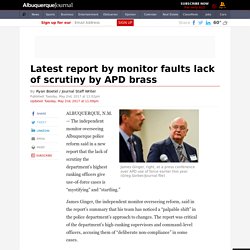 (Greg Sorber/Journal file) ALBUQUERQUE, N.M. — The independent monitor overseeing Albuquerque police reform said in a new report that the lack of scrutiny the department’s highest ranking officers give use-of-force cases is “mystifying” and “startling.” James Ginger, the independent monitor overseeing reform, said in the report’s summary that his team has noticed a “palpable shift” in the police department’s approach to changes. Car Chases Are Cool in Movies Not Communities - Foundation for Economic Education - Working for a free and prosperous world. On January 27, Ashley Tewell was killed in a fiery crash at the end of a high-speed police chase which left her daughter in critical condition. 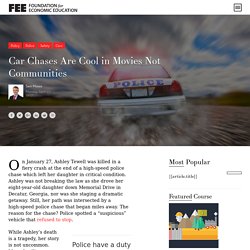 Ashley was not breaking the law as she drove her eight-year-old daughter down Memorial Drive in Decatur, Georgia, nor was she staging a dramatic getaway. Police officer fired after kicking handcuffed man in face. Captured on cellphone video running towards a handcuffed man on the ground and kicking him in the face without provocation, a Georgia police officer was immediately fired on Thursday after his supervisors viewed the footage. 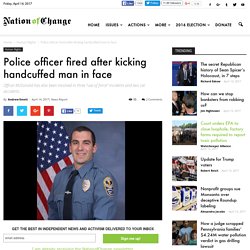 According to the arrest report, both officers at the scene failed to include the unnecessary use of force in their version of events. Around 4 p.m. on Wednesday, Gwinnett County Police Sgt. Un-Justice Department: Jeff Sessions wants to undo police reforms made over the past eight years. Attorney General Jeff Sessions, who has a long history of opposing civil rights, is now ordering a review of agreements implemented by President Barack Obama to address issues of police officers abusing their power. 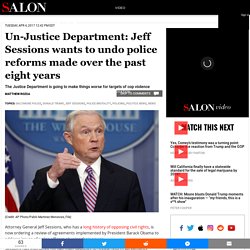 Sessions has instructed his two main deputies to review reform agreements reached under the Obama administration between the Justice Department’s civil rights division and police forces facing allegations of abuse, according to The Washington Post. Under Sessions, the Justice Department is arguing that it is important to make sure those agreements don’t undermine officer safety and morale. Family of Black Veteran Who Died in Jail Without Food & Water Gets $10 Million. Justice at last for the African-American Army vet who died of a broken neck in a Tulsa jail as staff taunted him by dropping food and water beyond his reach. 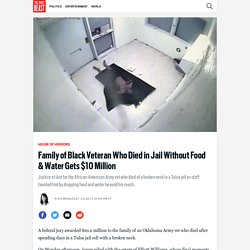 A federal jury awarded $10.2 million to the family of an Oklahoma Army vet who died after spending days in a Tulsa jail cell with a broken neck. On Monday afternoon, jurors sided with the estate of Elliott Williams, whose final moments were captured on surveillance video. The footage, which garnered national attention, showed a paralyzed Williams, lying naked on his back and grasping for food and water that detention officers dropped out of his reach.

Jail employees believed Williams, who was African-American, was “faking” paralysis despite his pleas for help, and they placed him in a video-monitored cell to catch him moving, according to trial testimony and an internal probe by the Tulsa County Sheriff’s Office. The verdict came after 10 hours of deliberations that began on Friday afternoon and ended Monday. Handout. The New, More Powerful Wave of Civilian Oversight of Police. In Oakland, Calif., police will soon answer to civilians newly entrusted with the power to discipline officers and fire the chief. 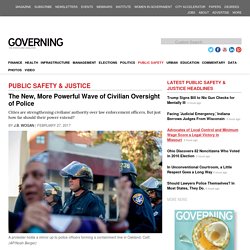 Last November, the city's residents voted to create a civilian-run commission with a level of authority over law enforcement that is rare in this country. “This was a no-brainer given Oakland’s history,” says Rashidah Grinage, coordinator of the Coalition for Police Accountability, a group that helped write the ballot measure, which faced no formal opposition and passed with 83 percent of the vote. “Most people realized that it would be futile to try to argue against instituting a police commission of this nature.” The Oakland Police Department has been under federal oversight since it settled a lawsuit in 2003 for $10.5 million. More than 115 plaintiffs alleged in the suit that four rogue officers had beat and planted evidence on them. The reforms in Oakland parallel similar changes in large cities around the country. Customs and Border Protection agents form the front lines of a 60,000-strong, pro-Trump immigration force — Quartz. The chaos unleashed by Donald Trump’s Jan. 27 executive order on immigration was swift and widespread, upending the lives of hundreds of travelers and their families, and threatening access to the US for tens of thousands more. 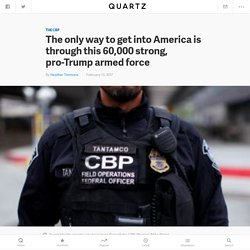 It also created nothing less than a constitutional crisis at airports in some of the US’s largest cities. As part of the US Department of Homeland Security’s largest law enforcement body, the 60,000 employees of the US Customs and Border Protection (CBP) are tasked with policing the migration of goods and people in and out of the country, with two-thirds of them manning border crossings, airports, and ports. The agency is part of the executive branch of government, which means it answers to the White House—and is subject to the same checks and balances, from the legislative and judiciary branches, as the administration. Since then, the legality of Trump’s travel ban has worked its way up the courts. However the policy lands, CBP will be its primary enforcer. Sessions May Resist Federal Oversight of Police, But There’s Another Option. With Sen. 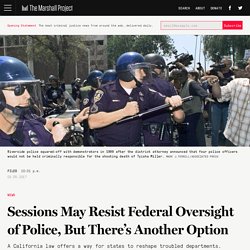 Jeff Sessions about to be the next attorney general, the likelihood that the Justice Department will continue to regularly intervene to reshape troubled local law enforcement agencies appears greatly diminished. Under the Obama administration, 12 police departments signed court-ordered agreements called consent decrees — four times as many as in the George W. Bush era. Sessions, an Alabama Republican, has made it plain that he’s highly skeptical of this option. Cop Sues Own Dept for Firing Him for Exposing 'Policy' of 'Illegally' Targeting 'Black Males' 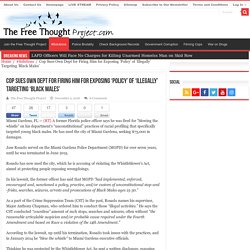 Why It’s So Hard to Stop Bad Cops From Getting New Police Jobs. Depending on the state you live in, you may be required to obtain an occupational license to become a plumber, an insurance agent, a hair braider, a manicurist, or even a racetrack employee. 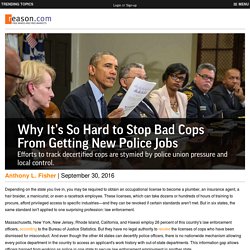 These licenses, which can take dozens or hundreds of hours of training to procure, afford privileged access to specific industries—and they can be revoked if certain standards aren't met. But in six states, the same standard isn't applied to one surprising profession: law enforcement. Massachusetts, New York, New Jersey, Rhode Island, California, and Hawaii employ 26 percent of this country's law enforcement officers, according to the Bureau of Justice Statistics. Complaints against police plummet in presence of body cams, says new study. A recent spate of violence between police officers and citizens in the United States has raised many questions about what happens when an organization meant to protect its populace harms it instead. As with so many quandaries these days, technology is often at the center of the debate – namely, regarding the use of body-mounted cameras and the public release of the footage they capture.

While body cams can often prove police misconduct, they can also exonerate officers who act appropriately given difficult situations. The simple tech can also, apparently, reduce complaints against cops, as shown in a recent University of Cambridge study. The research project, which Cambridge calls one of the largest randomized-controlled experiments in the history of criminal justice research, found that when police officers wore body cameras, complaints against them went down by an astounding 93 percent.

Doing so comes with its own challenge, however. Police Unions Demand Extra Pay For Accountability And Transparency. Rare conviction made in shooting by Virginia police officer. PORTSMOUTH, Va. — Prosecutors in Virginia won a rare conviction of a white former police officer who shot and killed an unarmed black teen suspected of shoplifting. But the guilty verdict Thursday was for voluntary manslaughter, a lesser charge than the original first-degree murder count. And the jury recommended a 2 ½ year prison sentence for Stephen Rankin, a punishment far below the decade prosecutors had sought. Prosecutors Drop All Remaining Charges Against Officers In Freddie Gray's Death.

Patrick Semansky/AP. How Teenagers Got Police to Back Down and Remove Military-Grade Weaponry From Their High Schools. Photo Credit: Courtesy of the Labor Community Strategy Center A coalition of Los Angeles high school students and grassroots organizers just accomplished the unthinkable. After nearly two years of sit-ins and protests, they forced the police department for the second-largest public school district in the United States to remove grenade launchers, M-16 rifles, a mine-resistant ambush protected (MRAP) vehicle and other military-grade weaponry from its arsenal.

But the coalition did not stop there. Members took over a Los Angeles Unified School District (LAUSD) board meeting in February to call for proof that the arms had been returned to the Department of Defense—a demand they eventually won in the form of an itemized invoice for every weapon sent back to the DoD. Going further, the coalition successfully pressed board members of the school district to apologize for greenlighting the policing of K-12 students with weapons of war. 'Not a War Zone'

The Chicago Police Department Investigation Is Part of a Larger Problem in America. There seems to be little doubt that the city of Chicago—Rahm Emanuel, mayor—no longer can control its police department effectively. NYPD Gets Sued After Kicking Wrong Family Out of Home. 2010 NPMSRP Police Misconduct Statistical Report -Draft- *Note: This is a draft version of the report until I work out some kinks with image and table formatting. Figure 1. Map displaying number of officers involved in reports tracked per county for 2010. (clicking the top right corner of this map will bring up an interactive map or view all our maps at www.targetmap.com) This is the 2010 National Police Misconduct Statistics and Reporting Project (NPMSRP) Police Misconduct Statistical Report.

The honorary medal was widely praised, but one group took severe, predictable offense to the gesture. Police Torture and the Real Militarization of Society. Police Make No Promises To Discipline Officers Who Violate Body Camera Policy. 25 ways that cops doing their jobs are turning us into a police state. Watch: Illegally parked cop gets a taste of police extortion. Charleston, SC — The owner of a Charleston small business decided he was going to show that cops are not above the law. In this video, Chad Walton of CWR Racing hooks his winch to a police cruiser that was parked illegally behind his business, with every intention of towing it to his facility. According to the posted sign, once an illegally parked vehicle is hooked for towing, it costs $250 to unhook. Homan Square revealed: How Chicago police ‘disappeared’ 7,000 people. Police “disappeared” more than 7,000 people at an off-the-books interrogation warehouse in Chicago, nearly twice as many detentions as previously disclosed , the Guardian can now reveal.

Noknock. Here's What Happens When You Complain To Cops About Cops. Jonathan_ferrell_shooting_how_charlotte_avoided_ferguson_s_fate.single. Horrifying Police Body Camera Footage Clearly Shows Current State Of America. Judge rules APD officer accused of kneeing man in groin will face trial. How to Get a Bad Cop Fired. The Police: Our Enemies in Blue? Baltimore State's Attorney: 'We Have Probable Cause To File Criminal Charges' Over Freddie Gray's Death.