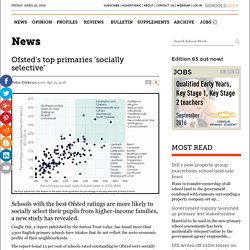 Caught Out, a report published by the Sutton Trust today, has found more than 1,500 English primary schools have intakes that do not reflect the socio-economic profile of their neighbourhoods. The report found 13 per cent of schools rated outstanding by Ofsted were socially selective, compared with the 7 per cent rated as requires improvement and the 6 per cent rated inadequate. Exam results followed a similar trend. Just 1 per cent of the schools in the bottom 10 per cent of key stage 2 performers were classed as socially selective, compared with 14 per cent of schools in the top 10 per cent for key stage 2 scores. The Sutton Trust said this could be hurting poorer children’s chance of success. Wanted: a new Chief Inspector by Roy Blatchford. The quaintly named headhunters Saxton Bampfylde rang me recently about the HMCI future vacancy. 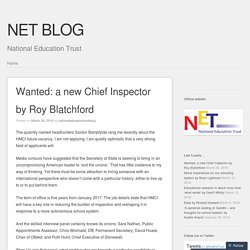 I am not applying. I am quietly optimistic that a very strong field of applicants will. Academy conversion is an unnecessary distraction – but here’s how to survive it. Schools must become academies by 2022. 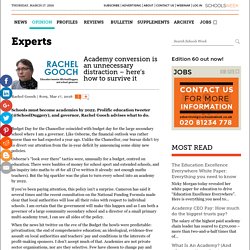 Prolific education tweeter (@SchoolDuggery), and governor, Rachel Gooch advises what to do. Budget Day for the Chancellor coincided with budget day for the large secondary school where I am a governor. ‘It will soon be untenable for the government to argue that autonomy is the answer to school improvement’ The prime minister is poised to carry out his promise to "turn every school into an academy" and "make local authorities running schools a thing of the past". 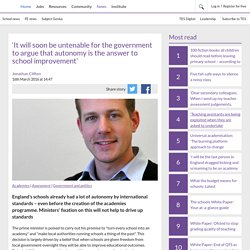 This decision is largely driven by a belief that when schools are given freedom from local government oversight they will be able to improve educational outcomes. But what if the government has learned the wrong lessons about school autonomy? 'We do not need bruisers and battleaxes running our schools. And our education system is not mediocre' Sir Michael Wilshaw, Her Majesty’s chief inspector of schools, said last week that: "We need headteachers in our secondary schools that are going to be really transformative leaders, and we have not got enough of them. 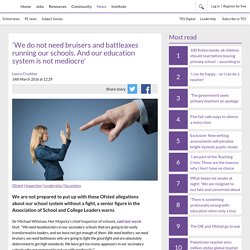 We need battlers, we need bruisers, we need battleaxes who are going to fight the good fight and are absolutely determined to get high standards. We have got too many appeasers in our secondary schools who are prepared to put up with mediocrity. " This statement contains a category error. Transformative leaders are not “battlers, bruisers or battleaxes.” “Battlers, bruisers and battleaxes” fall more correctly into the theory of transactional leadership, which assumes that people are motivated by reward and punishments. Advice for the next Ofsted chief: it’s time to scrap your job. For a second or two I was tempted to apply. 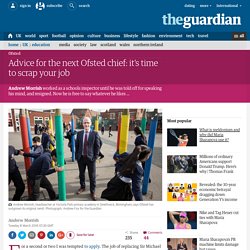 The job of replacing Sir Michael Wilshaw as Ofsted chief is up for grabs and I’m sure, deep down, every school leader wouldn’t mind having a crack at it. Nothing stirs up more angst among headteachers than Ofsted. So we’d all like to make things better. Since I became a headteacher in 1998, the chief inspector has often been portrayed as a pantomime villain – an essential part of the plot, but everyone’s least favourite character. I’ve seen seven chiefs come and go, and with each one comes the heralding of a new dawn. Teachers are deserting the UK in droves. Excellent work, Michael Wilshaw. The chief inspector of schools, Sir Michael Wilshaw, has claimed that the UK faces a “teacher brain drain” as newly qualified educators move abroad to find work. 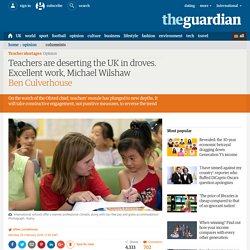 But actually it’s not just the warmer climate of places such as the Middle East that’s so appealing to the UK’s best teachers all of a sudden – it’s the warmer professional climate that the international schools offer that’s really alluring. That, along with tax-free pay and gratis accommodation. But instead of looking at the real reason teachers are leaving, Wilshaw – in his arrogance – is firing warning shots at the teaching profession and saying, among other things, that teachers who have trained in our system should make a contractual commitment to teach in the UK for the first few years of their careers. This will do nothing to address the real problems afflicting our education system. These words of warning come from a man who was instrumental – along with Michael Gove – in creating the problems in the first place. Should we scrap Ofsted? The pros, cons and alternatives.

“Scrapping Ofsted would leave us with a fragmented system” Dr Melanie Ehren, reader in educational accountability and improvement, UCL Institute of Education Many teachers and headteachers feel that Ofsted does more harm than good: “overhauling Ofsted” and “abolishing the watchdog” have become popular catch phrases. 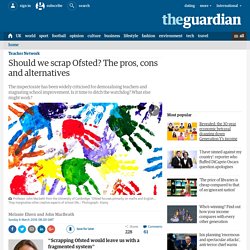 A quick glance at some headlines over the years explains some of the concerns: inaccuracy and inconsistency of Ofsted gradings; and inspectors who are poorly qualified and disrespectful in their communication with schools, or have a formulaic view of teaching and leadership. England’s schools make us the extremists of Europe. Happiness does not mean being ecstatic. 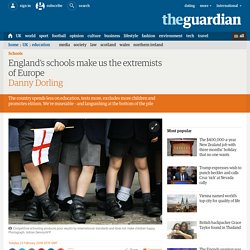 It is the avoidance of misery, the gaining of long-term life satisfaction, the feeling of fulfilment, of worth, of kindness, of usefulness and of love. We need new measures of what matters most to us. Sound the alarm bells over search for new chief inspector of schools. Nicky Morgan appears to have fired the starting gun on six months of speculation as to who will be the next chief inspector of schools. 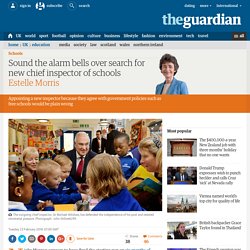 Testing the names of possible candidates through anonymous briefings to the press is not the best way of making one of the most important appointments in education, but given that is what seems to be happening, we should seize the chance to join the debate. Whoever gets the job will wield influence well beyond the lifetime of this parliament, but it is its independence, unique among senior education posts, that makes this such an important position. The chief inspector is answerable to parliament, not the government, and has a legal duty to inspect and report without fear or favour. He or she works for the public, not the education secretary.

Secret Teacher: I see Ofsted for what it is – a purposeless farce. I have a certain sympathy with the concept of accountability: we all want to know if our local school is any good and that our taxpayer contributions are spent effectively. But the way this straightforward desire has manifested itself in Ofsted – and the way some managers in schools have chosen (and it is a choice) to implement the inspectorate’s criteria – has turned the entire process into a pointless, stressful, tick-box exercise.

I’ve been teaching in secondary schools for 16 years and have just been through my fifth Ofsted inspection. I never used to think much about inspections, but now they’re seen as a life-altering, career-defining Armageddon. It’s hard to identify a tipping point that led us to the current state of affairs, where colleagues try to redefine teaching and work idiotic hours to invent lessons that achieve the impossible. 'Like a horror show: It is difficult to comprehend the government's stupidity over testing in schools'

I return, once again, to the absurdity of national testing of primary school children. It’s a subject to which I return with fascinated horror because it is difficult to comprehend the scale of the problem combined with the stupidity of the government’s policy. The latest stage in the assessment saga is the key stage 2 teacher assessment exemplifications for writing, which were released last week. Many teachers, who had been waiting anxiously for these materials, must, when they opened them, have despaired. Not only has the standard for reaching the expected level been very significantly raised (more akin to an old level 5 rather than the promised 4b), but also the assessment burden placed on Year 6 teachers is huge and unworkable.

If schools follow the government’s guidance, a teacher of a Year 6 class has to make 34 separate assessments, for each pupil, for six different types of writing. Perhaps most worryingly of all, parents don't know their child is being assessed. Parenting not schools has the biggest impact on student outcomes, so why are teachers blamed for results? Inequality is a problem schools alone can’t fix.

Lost beneath the waves of the terrible floods this Christmas was coverage of another startlingly depressing story. New research from the Fabian Society revealed the prospect of significantly sharper inequality heading Britain’s way. And with cuts falling disproportionately on single parents, this means the number of children living in poverty will rise from [pdf] 2.5 million (19%) to 4.4 million (28%) by 2030. Want a pay rise? Teach able children, apparently. Artificial Intelligence.

I can only assume that the reason why the DfE and their sponsored Boudicca, Ms Morgan, insist on issuing policy via social media, rather than through professional channels, is due to the fact that there are now so many different types of educational institutions out there that it’s a nightmare to keep a comprehensive rolodex of Head’s email addresses. Far easier to tweet it and hope that most of us will catch it as we try to navigate through our timelines, that are mostly dominated by the edu-war between the progressives and traditionalists.

Either that or Ms Morgan suffers from an acute sense of self-awareness and knows that if many of her proposals were quietly put forward, the profession would snuff them out like a candle at the end of its wick. Extreme results pressures: as pointless as they are brutal - NAHT. How I apparently undermined Ofsted. Letting go. An Open Letter To Nicky Morgan. Dear Nicky: Wave goodbye to Ofsted and performance-related pay, while keeping bureaucracy to an absolute minimum (photo: Carl Court/Getty Images) Dear Nicky Morgan, Might I offer you some advice? Wider assessment: why current performance grades are a load of rubbish. This is not a post that specifically relates to music education: it is about the way that we report to parents at KS3 and KS4 across all subjects. Ofsted releases biographies of its HMIs. Ofsted has released an online catalogue of all its HMIs (Her Majesty’s Inspectors).

The inspectorate yesterday published an 82-page document profiling each HMI from every sector – education, early years, further education and skills, and social care. The “pen portraits” include whether the HMI has been DBS (Disclosure and Barring Service) checked and their career history. For example, it explains that HMI Elizabeth Farr is a qualified teacher and has “extensive” senior leadership experience in schools, including headship. Ms Farr has expertise in subjects such as mathematics, literacy, music and governance and has been a National Leader for Education and chaired an interim executive board. Patrick Geraghty, the document says, was appointed as an HMI nine years ago and “regularly” leads school and college inspections. He has previously held senior management positions in schools and in a further education institution. Poverty is about not having enough money. So don’t blame schools for it.

There is a joke in the film Brassed Off that goes like this: God’s assistant is creating people. He turns to God and says, “We’ve got all these bodies left, but we’re right out of brains, right out of hearts and right out of vocal cords”. And so God says “Sew ’em up anyway, make them talk out their arse, and call them the Tory party.” Sir Michael Wilshaw's speech to CBI conference - Speeches.