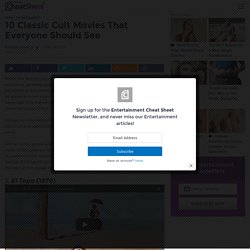 Although the qualities that define a cult movie are somewhat amorphous, generally speaking, films that have inspired an unusually devoted group of fans are labeled as cult movies. And while some film critics have argued that the label should only be applied to lesser-known, underground films, nowadays, there are many mainstream big-budget films that are widely regarded as cult movies due to their lasting popularity with committed groups of fans.

Perhaps the only distinguishing trait everyone can agree upon is that cult movies have some type of unusual aspect that sets them apart from most other movies. In short, cult movies are weird. With no widely agreed-upon definition and with legions of passionate fans ready to argue the merits of their particular favorites, any top 10 list of cult movies is pretty much guaranteed not to please everyone. 1. 2. 3. 4. 5. 6. 7. 8. The film’s popularity has even impacted the design of a common office product. 9. 10. 13 Cult Films About Cults. Here at The Playlist, where we pray to our benign Leader every time we hit "publish," abstain from all sexual activity, grow our own vegetables and pause in our tasks thrice daily to face due East and chant our mantra "Kurosawa, Kurosawa, Bergman, Tarkovsky, Kubrick, Ommm," we'd obviously know better than to get ourselves caught up in any sort of cult. 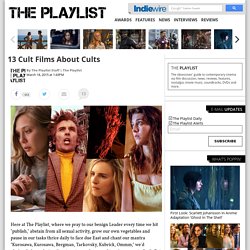 But the lure that can be exerted over weaker souls than our own perfected ones has led to some fascinating, often chilling films, whether set within the confines of the sect or dealing with the process of deprogramming and reinsertion into ordinary society. The latter is the background for this month's release of "Faults," from debut feature director Riley Stearns (review here) and which stars Mary Elizabeth Winstead as a cult member whose parents hire a has-been expert played by Leland Orser to un-brainwash her during a week in a bland hotel room.

Vogue Editors Choose Their Favorite '90s Cult Movies. One night in the late ’90s, I went to a party at a Manhattan nightclub to celebrate the release of Emancipation, a three-hour album by the artist formerly known as Prince, then known as a symbol, then as The Artist Formerly Known as Prince, and finally as Prince again. 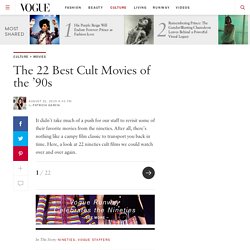 There was a memorable moment as he walked across a floor crowded with fellow African-American royalty (Quincy Jones, Spike Lee, Savion Glover), a handful of random white pop stars such as Billy Corgan and Marilyn Manson, and a major contingent of bodyguards appropriate to this high density of celebrity. Prince, dressed in red, happened to be headed directly toward Lenny Kravitz, whose monumental Afro was barely contained by his enormous knit cap. The two came face-to-face in a meet-and-greet. It was, of course, an era before cell phone cameras and cell-fies of all description, and no photographers were present. They didn’t need to be. Nevertheless, he was more or less sweet and communicative. Ride the Wild Surf. "In Hawaii there's a place known as Waimea Bay/ Where the best surfers in the world come to stay. 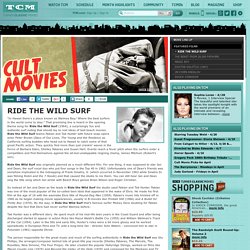 " That promising line is heard in the opening theme song for Ride the Wild Surf (1964), a surprisingly fun and authentic surf outing that should lay to rest ideas of bad beach movies. Ride the Wild Surf teams Fabian and Tab Hunter with future soap opera actor Peter Brown (Days of Our Lives, The Young and the Restless) as California surfing buddies who head out to Hawaii to catch some of that great Pacific action. They quickly find more than just crankin' waves in the forms of Barbara Eden, Shelley Fabares and Susan Hart.

Events reach a fever pitch when the surfers enter a competition and find themselves against the all-but-unstoppable reigning champ, James Mitchum (Robert's son). Ride the Wild Surf was originally planned as a much different film. So instead of Jan and Dean as the leads in Ride the Wild Surf the studio used Fabian and Tab Hunter. Tab Hunter was a different story. The 10 Biggest Cult Films of the Netflix Era. The 10 Biggest Cult Films of the Netflix Era By Dustin Rowles | Netflix Movies and TV | July 5, 2015 | Comments (87 View You can trace cult films back for decades, but they didn’t really begin gaining traction until the advent of the VCR, which allowed us to revisit and resurface films that were otherwise ignored at the box office. 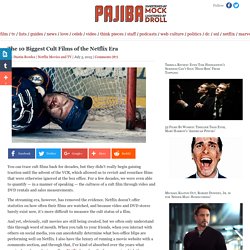 For a few decades, we were even able to quantify — in a manner of speaking — the cultness of a cult film through video and DVD rentals and sales measurements. The streaming era, however, has removed the evidence. And yet, obviously, cult movies are still being created, but we often only understand this through word of mouth.