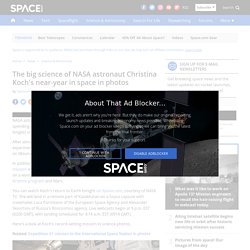 After almost a year in space, Koch has conducted numerous science experiments on the orbiting lab, including studying the effects of microgravity on Mizuna mustard greens, combustion, bioprinting and kidney diseases. Proposed House bill urges NASA to delay putting US boots back on the moon until 2028. An authorization bill introduced on Friday by Rep. 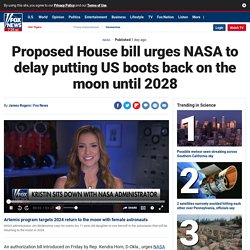 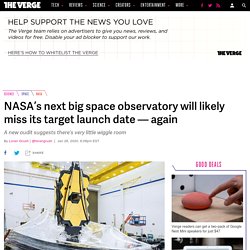 Unforeseen technical problems are prolonging the process of finishing up the telescope, making it increasingly likely that the spacecraft will have to launch at a later date. The grim news is detailed in the latest report from the Government Accountability Office (GAO), which performs audits of federally run programs. The GAO, which has been keeping a watchful eye on the telescope’s development for years, claims that there is only a 12 percent chance the agency will meet its March 2021 goal, thanks to a recent analysis done in October by those working on the program. NASA will figure out a new date in the spring of this year, according to the audit. A delay would be just the latest hiccup in a long, troubled history for the James Webb Space Telescope, or JWST. Remember that 2024 Moon thing? How about Mars in 2033? Authorization bill moots 2028 for more lunar footprints. There is every chance that Lucy is about to whip the football from Charlie Brown once again as a fresh NASA Authorization Bill was introduced with some significant changes to the infamous 2024 boots-on-Moon goal. 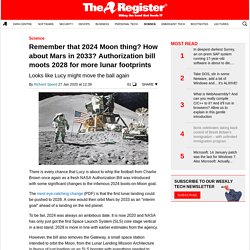 The most eye-catching change (PDF) is that the first lunar landing could be pushed to 2028. A crew would then orbit Mars by 2033 as an "interim goal" ahead of a landing on the red planet. To be fair, 2024 was always an ambitious date. It is now 2020 and NASA has only just got the first Space Launch System (SLS) core stage vertical in a test stand. 2028 is more in line with earlier estimates from the agency. However, the bill also removes the Gateway, a small space station intended to orbit the Moon, from the Lunar Landing Mission Architecture in favour of just loading up an SLS booster with everything needed to land and firing the stack at the Moon. Shades of Apollo indeed and, despite the bill's brave words, not particularly sustainable. This NASA Visualisation of a Black Hole Is So Beautiful, We Could Cry. The first-ever direct image of a black hole's event horizon was a truly impressive feat of scientific ingenuity. 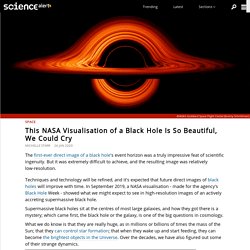 But it was extremely difficult to achieve, and the resulting image was relatively low-resolution. Techniques and technology will be refined, and it's expected that future direct images of black holes will improve with time. In September 2019, a NASA visualisation - made for the agency's Black Hole Week - showed what we might expect to see in high-resolution images of an actively accreting supermassive black hole.

Supermassive black holes sit at the centres of most large galaxies, and how they got there is a mystery; which came first, the black hole or the galaxy, is one of the big questions in cosmology. YouTube. NASA is hiring someone to help figure out how to get Mars rocks back to Earth — and the position pays at least $182,000. YouTube. NASA's next Mars rover will get one of these 9 names. And then there were nine. 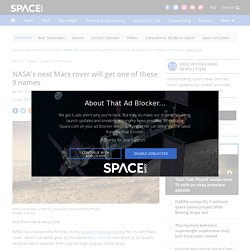 NASA has chosen nine finalists in the student naming contest for its next Mars rover, which currently goes by the bland Mars 2020 (a reference to its launch window, which extends from July through August of this year). The space agency picked three submissions in each of the three age categories — grades K-4, 5-8 and 9-12. Says Goodbye to One of Agency's Great Observatories. The live-streamed show, featuring mission members and NASA leadership, will air on Jan. 22, at 10 a.m. 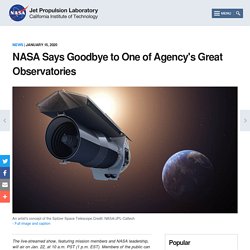 PST (1 p.m. EST). China Plans 39 Million-Mile Race to Mars to Catch Up With NASA. China is taking its rivalry with the U.S. to another planet. 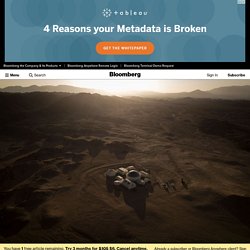 The Chinese space agency is preparing a mid-year mission to Mars, marking the most ambitious project on an exploration checklist intended to achieve equal footing with NASA and transform the nation’s technological know-how. Landing the unmanned probe on the red planet would cap President Xi Jinping’s push to make China a superpower in space. NASA Wants to Grow a Moon Base Out of Mushrooms. Shroom Base NASA scientists are exploring a peculiar strategy for building a Moon base and other off-world structures: growing them onsite out of living mushrooms. 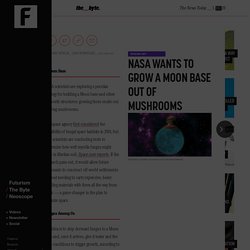 The space agency first considered the possibility of fungal space habitats in 2018, but now scientists are conducting tests to determine how well mycelia fungus might grow in Martian soil, Space.com reports. If the research pans out, it would allow future astronauts to construct off-world settlements without needing to carry expensive, heavy building materials with them all the way from Earth — a game-changer in the plan to colonize space. Fungus Among Us The idea is to ship dormant fungus to a Moon base and, once it arrives, give it water and the right conditions to trigger growth, according to a NASA press release. “Right now, traditional habitat designs for Mars are like a turtle — carrying our homes with us on our backs — a reliable plan, but with huge energy costs,” lead researcher Lynn Rothschild said in the release. Hubble Views Galaxy From Famous Catalog.

This bright, somewhat blob-like object — seen in this image taken by the NASA/ESA Hubble Space Telescope — is a galaxy named NGC 1803. 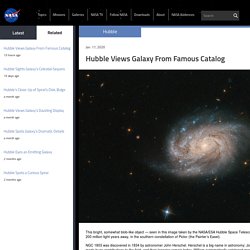 It is about 200 million light-years away, in the southern constellation of Pictor (the Painter’s Easel). NGC 1803 was discovered in 1834 by astronomer John Herschel. Herschel is a big name in astronomy; John, his father William and his aunt Caroline all made huge contributions to the field, and their legacies remain today. William systematically cataloged many of the objects he viewed in the night sky, named many moons in the solar system, discovered infrared radiation and more. Caroline discovered several comets and nebulas. NASA narrows down Mars 2020 rover names: Hello, Fido?

NASA is definitely keeping an open mind when it comes to naming its Mars 2020 rover. It may end up being as simple as "Wonder" or as unusual as "Propulsion Major Crater. " NASA announced on Monday the list of semifinalists for its rover-naming contest, which was open to US kids from kindergarten through 12th grade. Volunteer judges narrowed down 28,000 essay submissions to 155 semifinalists. There are some repeats among the proposed names, with Tenacity, Determination, Ingenuity, Inspiration, Possibility, Perspective and Perseverance showing up more than once.

Some of the names take the form of creative acronyms, including Fido (Fearless Information Data Officer), Aliett (Ancient Life Investigator Of Extra Terrestrial Turf) and Ride (Revolutionizing Interplanetary Discoveries and Exploration). You can browse the entries, read the essays and start rooting for your favorite. NASA’s Super-Muscular Mice Return to Earth From Space. Mighty Mice On Tuesday, a SpaceX Dragon capsule splashed down in the Pacific Ocean, bringing with it 3,800 pounds of cargo from the International Space Station.

That cargo delivery included 40 mice, eight of which scientists genetically engineered to be extremely muscular — and now that they’re back on Earth, the “mighty mice” may yield insights that could help human astronauts stay healthy in space. Myostatin Island. Planet Hunter Finds Earth-Size Habitable-Zone World. NASA's Transiting Exoplanet Survey Satellite (TESS) has discovered its first Earth-size planet in its star's habitable zone, the range of distances where conditions may be just right to allow the presence of liquid water on the surface. Scientists confirmed the find, called TOI 700 d, using NASA's Spitzer Space Telescope and have modeled the planet's potential environments to help inform future observations. TOI 700 d is one of only a few Earth-size planets discovered in a star's habitable zone so far.

Others include several planets in the TRAPPIST-1 system and other worlds discovered by NASA's Kepler Space Telescope. "TESS was designed and launched specifically to find Earth-sized planets orbiting nearby stars," said Paul Hertz, astrophysics division director at NASA Headquarters in Washington. NASA's Hubble Surveys Gigantic Galaxy. This majestic spiral galaxy might earn the nickname the "Godzilla Galaxy" because it may be the largest known in the local universe.

The galaxy, UGC 2885, is 2.5 times wider than our Milky Way and contains 10 times as many stars. But it is a "gentle giant," say researchers, because it looks like it has been sitting quietly over billions of years, possibly sipping hydrogen from the filamentary structure of intergalactic space. This fuels modest ongoing star birth at half the rate of our Milky Way. In fact, its supermassive central black hole is a sleeping giant, too; because the galaxy does not appear to be feeding on much smaller satellite galaxies, it is starved of infalling gas.

The galaxy has been nicknamed "Rubin’s galaxy," after astronomer Vera Rubin (1928 – 2016) by Benne Holwerda of the University of Louisville, Kentucky, who observed the galaxy with NASA's Hubble Space Telescope. NASA Lost Contact With Spacecraft Designed to Study Planets Outside Our Solar System. NASA Proposed Sending Japanese Astronauts to the Moon.

NASA's New Mars 2020 Car May Look Like the Curiosity Rover, But It's No Twin. NASA plans to launch a rover to Mars this July to hunt for signs of ancient Red Planet life. NASA's monster rocket inches towards testing while India plots return to the Moon. NASA reveals galactic 'fireworks' in stunning new image. A new image released by NASA shows a gorgeous display of fireworks in a galaxy located about 23 million light-years away. However, it's not paper, powder and actual fire that's creating this stunning image, but a huge black hole, shock waves and vast amounts of gas, according to NASA. The galaxy shown, NGC 4258, is well known for having two extra spiral arms that glow in X-ray, optical and radio light. What's Up: January 2020 Skywatching Tips from NASA. Watch NASA's Mars 2020 Rover Ace Its 1st Test Drive (Video)

NASA Just Unveiled Its 2020 Mars Rover, And We're Beyond Excited. NASA 2020: Are You Ready? NASA reveals galactic 'fireworks' in stunning new image. Sciencealert. NASA Wants to Launch a New Telescope to Search for a Second Earth. NASA's Spitzer Telescope captures massive 'burning' cloud in space. Space is not on fire, but you can't be blamed for thinking it might be after a look at this "burning" cloud. NASA's Spitzer Space Telescope captured a fiery image of a gigantic collection of gas and dust that stretches over 500 light-years across. The fiery glow of the Perseus Molecular Cloud, which makes it look like outer space is aflame, is actually "infrared radiation" from the warm dust.

The cloud contains more than 10,000 solar masses of gas and dust, and has fascinated astronomers for years. A collection of gas and dust over 500 light-years across, the Perseus Molecular Cloud hosts an abundance of young stars. Www.merriam-webster. NASA's Mars Lander 'Mole' Is Digging Again as Marsquake Mystery Baffles Scientists.

Digging a little deeper -The mole has moved further down. With help from @NASAJPL and @DLR_en, my latest efforts to help the heat probe seem to be working. More digging to come. pic.twitter.com/JumZaqAecYDecember 16, 2019 The troubled "mole" on NASA's InSight Mars lander is moving again, even as scientists working on the robot's seismometer ponder new marsquake mysteries. InSight touched down in November 2018 on a quest to understand the interior of the Red Planet. Two of its crucial tools for that task were a burrowing heat probe nicknamed the mole and a super-sensitive seismometer to study motion within the planet. But soon after spacecraft personnel told the mole to get digging, something went wrong, and scientists and engineers affiliated with the mission have been strategizing ways to get the instrument moving ever since.