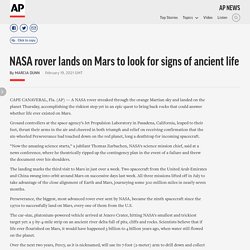 (AP) — A NASA rover streaked through the orange Martian sky and landed on the planet Thursday, accomplishing the riskiest step yet in an epic quest to bring back rocks that could answer whether life ever existed on Mars. Ground controllers at the space agency’s Jet Propulsion Laboratory in Pasadena, California, leaped to their feet, thrust their arms in the air and cheered in both triumph and relief on receiving confirmation that the six-wheeled Perseverance had touched down on the red planet, long a deathtrap for incoming spacecraft. Arecibo Observatory telescope collapses in Puerto Rico months after cables snap - ABC News.

A huge, already damaged Arecibo radio telescope in Puerto Rico has completely collapsed after its 900-ton receiver platform fell onto the reflector dish below. 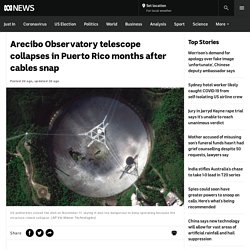 Key points: The telescope was closed earlier this month after a main cable broke Scientists had used the telescope to study pulsars to detect gravitational wavesIt also served as a training ground for graduate students and drew about 90,000 visitors a year The telescope has played a key role in astronomical discoveries for more than half a century and entered popular culture with appearances in Hollywood films like GoldenEye and Contact. The US National Science Foundation (NSF) had earlier announced that the Arecibo Observatory would be closed.

An auxiliary cable snapped in August, causing a wide gash on the 305-metre-wide dish and damaging the receiver platform that hung above it. CACTus CME Homepage. CACTUS autonomously detects coronal mass ejections (CMEs) in image sequences from LASCO. 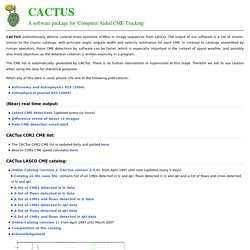 The output of our software is a list of events, similar to the classic catalogs, with principle angle, angular width and velocity estimation for each CME. In contrast to catalogs assembled by human operators, these CME detections by software can be faster, which is especially important in the context of space weather, and possibly also more objective, as the detection criterion is written explicitly in a program. The CME list is automatically generated by CACTus. There is no human intervention or supervision at this stage. Therefor we ask to use caution when using the data for statistical purposes. When any of this data is used, please cite one of the following publications: (Near) real time output: CACTus COR2 CME list: The CACTus COR2 CME list is updated daily and posted here. 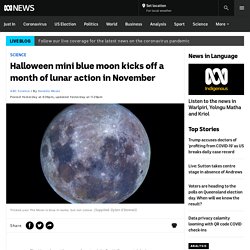 Not only will it be the smallest full moon of the year, it's also a blue moon in Western Australia. It won't be a blue moon in other states and territories because time zone trickiness means the full moon falls just after the clock strikes midnight everywhere east of Western Australia. Even though it looks full for about a day or so, in astronomy a full moon is the exact point when it is opposite the Sun so its face is 100 per cent lit.

Blue or not, the mini full moon will look magic tonight wherever you are, says Andrew Jacob, a curator at Sydney Observatory. And tonight's minimoon kicks off a big month of moon action. What's a blue moon anyway? A blue moon is 'blue' in name only. Our Universe. Holographic Universe.

Ten years of the sun in one hour – Nasa releases mesmerising space film. Gorgeous New Map of the Moon Is Most Detailed to Date. Even at its closest approach, the moon doesn’t come within 220,000 miles of Earth. 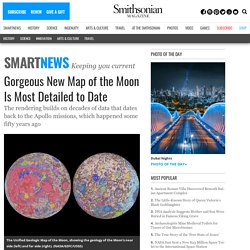 But thanks to a stunning new map created by scientists at the United States Geological Survey (USGS), NASA and the Lunar Planetary Institute, the world can still get an intimate look at Earth's stunning satellite in extraordinary detail. Called the Unified Geologic Map of the Moon, the map combines Apollo-era data from the 1960s and 1970s with modern satellite observations to yield a dizzying catalog of geological features, including topology and the ages and chemical nature of the rocks that speckle the lunar surface.

“This map is a culmination of a decades-long project,” Corey Fortezzo, USGS geologist and lead author on this work, says in a statement. “It provides vital information for new scientific studies by connecting the exploration of specific sites on the moon with the rest of the lunar surface.” Each millimeter on the map represents 5 kilometers on the moon—a 1:5,000,000 scale. ORBIT - A Journey Around Earth in Real Time [4k] Earth's magnetic song recorded for the first time during a solar storm. Data from ESA's Cluster mission has provided a recording of the eerie "song" that Earth sings when it is hit by a solar storm. 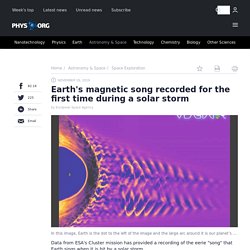 The song comes from waves that are generated in the Earth's magnetic field by the collision of the storm. The storm itself is the eruption of electrically charged particles from the sun's atmosphere. A team led by Lucile Turc, a former ESA research fellow who is now based at the University of Helsinki, Finland, made the discovery after analyzing data from the Cluster Science Archive. Black hole image released by Event Horizon Telescope team in world first - Science News - ABC News. Scientists have glimpsed the event horizon of a black hole for the very first time. 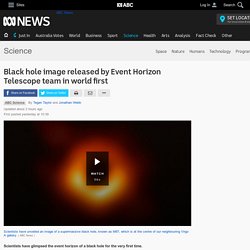 Key points black hole Key points: The world-first image shows the supermassive black hole at the centre of M87, a neighbouring galaxy to our own Milky WayThe image is the result of a seven-year project linking telescopes all over the world to create 'a dish the size of the planet'The fact the image matches so closely to predictions is a confirmation of Einstein's theory of general relativity. NASA Live - Earth From Space (HDVR) ♥ ISS LIVE FEED #AstronomyDay2017 □ Our Focus: Stargazing - ABC. Gravitational waves: breakthrough discovery after two centuries of expectation.

Physicists have announced the discovery of gravitational waves, ripples in the fabric of spacetime that were first anticipated by Albert Einstein a century ago. 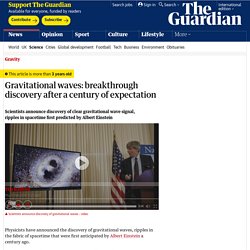 “We have detected gravitational waves. We did it,” said David Reitze, executive director of the Laser Interferometer Gravitational-Wave Observatory (Ligo), at a press conference in Washington. The announcement is the climax of a century of speculation, 50 years of trial and error, and 25 years perfecting a set of instruments so sensitive they could identify a distortion in spacetime a thousandth the diameter of one atomic nucleus across a 4km strip of laserbeam and mirror. The phenomenon detected was the collision of two black holes.

Using the world’s most sophisticated detector, the scientists listened for 20 thousandths of a second as the two giant black holes, one 35 times the mass of the sun, the other slightly smaller, circled around each other. 'A new way to study our universe': what gravitational waves mean for future science. You wait 100 years for a gravitational wave and then four come along at once. 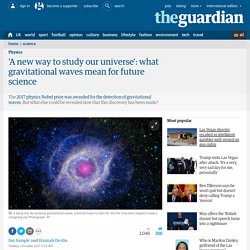 Or so it must seem to those who spent decades designing and building the exquisite instruments needed to sense the minuscule ripples in spacetime that Albert Einstein foresaw in his 1905 theory of general relativity. The first gravitational wave bagged by physicists reached Earth on 14 September 2015 and sent a quiver through the US-based Laser Interferometer Gravitational-Wave Observatory (Ligo). The second hit three months later, on Boxing Day, followed by a third in January this year. When the fourth wave arrived in August, both Ligo and a second observatory in Italy, named Virgo, recorded the moment. Each of the gravitational waves had been set in motion by violent collisions between black holes more than a billion years ago. Why are astronomers interested in gravitational waves? (Intermediate) - Curious About Astronomy? Ask an Astronomer.

When you look up at the night sky, you see a very particular view of the Universe. 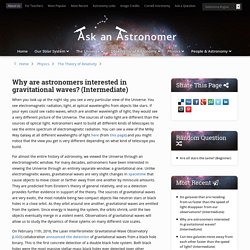 You see electromagnetic radiation, light, at optical wavelengths from objects like stars. If your eyes could see radio waves, which are another wavelength of light, they would see a very different picture of the Universe. Elon Musk’s Mars project is the ultimate symbol of our throwaway culture. Elon Musk made some rather wild promises at the International Astronautical Congress last week: his SpaceX company is going to start sending people to Mars by 2024, and in 40 to 100 years, he will have a million of us living there.

I have one big question about this. Why bother? Theconversation. Four stars in the night sky have been formally recognised by their Australian Aboriginal names. The names include three from the Wardaman people of the Northern Territory and one from the Boorong people of western Victoria. The Wardaman star names are Larawag, Wurren and Ginan in the Western constellations Scorpius, Phoenix and Crux (the Southern Cross). The Boorong star name is Unurgunite in Canis Majoris (the Great Dog). They are among 86 new star names drawn from Chinese, Coptic, Hindu, Mayan, Polynesian, South African and Aboriginal Australian cultures.