The Plague of Ecommerce Return Rates and How to Maintain Profitability. Returns can be a disease — aggressively attacking profit margins, gutting conversion rates, and ultimately threatening your business. 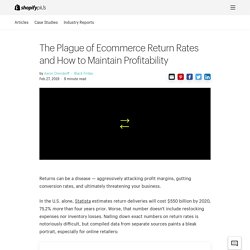 In the U.S. alone, Statista estimates return deliveries will cost $550 billion by 2020, 75.2% more than four years prior. Worse, that number doesn’t include restocking expenses nor inventory losses. Nailing down exact numbers on return rates is notoriously difficult, but compiled data from separate sources paints a bleak portrait, especially for online retailers: The real cost driver is this: many customers buy with an explicit plan to immediately return some or all of their items. In response, businesses are adding workers, increasing warehouse space, and establishing separate departments to handle reverse logistics. How Returns Impact Online Sales To make a buck, you’ve got to bare it all.

In addition: Unfortunately, these data points leave online businesses feeling stuck: customers want free and easy return policies but returns are costly. AI PRIVACY WORRY. Influencers and politics. Forrester Yieldmo OS Report 12 2019 2 2. Google's latest search results change further blurs what's an ad. Users of Google search on desktops may have noticed a slight change over the last week and that change is affecting what they perceive as an ad. 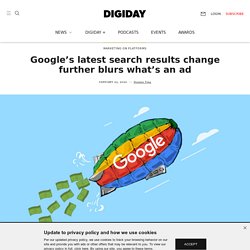 This represents a further blurring of the lines between ads and organic sources in search. Beginning Jan. 13, Google redesigned its desktop search experience to feature favicons, or preferred icons. For organic results, users will see favicons, or a brand’s icon next to the url. For ads, they will see a bolded black ad label next to the url that looks similar to a favicon. This redesign first appeared in May on Google search for mobile devices. This isn’t the first time Google has changed the look of ads in search. “What an ad looks like has gotten more subtle over the years,” said Brooke Osmundson, associate director of paid search for NordicClick, a pay-per-click agency. The concept of banner blindness loosely applies here, said SEO consultant Bill Hartzer. Early results from NordicClick seem to support that theory. Thinking Edibility Otherwise · Journal of Design and Science. How does biodesign intersect with food, agriculture, and edible ecology? 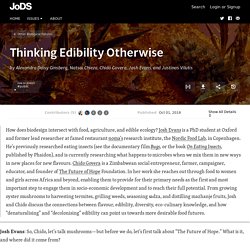 Josh Evans is a PhD student at Oxford and former lead researcher at famed restaurant noma’s research institute, the Nordic Food Lab, in Copenhagen. He’s previously researched eating insects (see the documentary film Bugs, or the book On Eating Insects, published by Phaidon), and is currently researching what happens to microbes when we mix them in new ways in new places for new flavours. Chido Govera is a Zimbabwean social entrepreneur, farmer, campaigner, educator, and founder of The Future of Hope Foundation.

In her work she reaches out through food to women and girls across Africa and beyond, enabling them to provide for their primary needs as the first and most important step to engage them in socio-economic development and to reach their full potential. Making Up the Unreal · Journal of Design and Science. Unreality isn’t just about rewired propaganda, conspiracy theories and political dystopias. 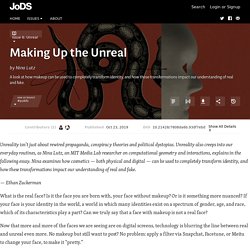 Unreality also creeps into our everyday routines, as Nina Lutz, an MIT Media Lab researcher on computational geometry and interactions, explains in the following essay. Nina examines how cosmetics — both physical and digital — can be used to completely transform identity, and how these transformations impact our understanding of real and fake. — Ethan Zuckerman. Replatforming Unreality · Journal of Design and Science. Beyond the familiar Twitter debates, Facebook invitations and Instagram selfies, an entirely new digital universe has emerged. 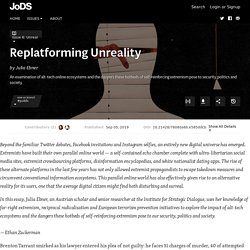 Extremists have built their own parallel online world — a self-contained echo chamber complete with ultra-libertarian social media sites, extremist crowdsourcing platforms, disinformation encyclopedias, and white nationalist dating apps. On the Internet, Nobody Knows You’re a Bot: Pseudoanonymous Influence Operations and Networked Social Movements · Journal of Design and Science. Brian Friedberg is an investigative ethnographer whose work focuses on the impacts that alternative media, anonymous communities and popular cultures have on political communication and organization. 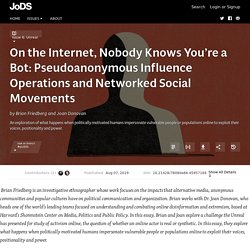 Brian works with Dr. The Effects of Participatory Propaganda: From Socialization to Internalization of Conflicts · Journal of Design and Science. In this essay, Gregory Asmolov, a Leverhulme Early Career Fellow at King’s College London and a scholar noted for his work understanding the Russian Internet (Runet), examines a new set of propaganda strategies emerging on social networks in Ukraine and Russia. 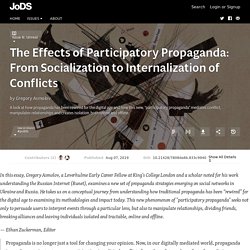 Unreality and Social Corrosion: Masha Gessen and Ethan Zuckerman in Conversation · Journal of Design and Science. Masha Gessen is a journalist and the author of ten books of nonfiction, most recently The Future Is History: How Totalitarianism Reclaimed Russia, which won the 2017 National Book Award for Nonfiction. 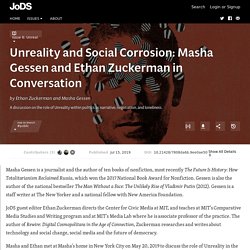 Gessen is also the author of the national bestseller The Man Without a Face: The Unlikely Rise of Vladimir Putin (2012). Gessen is a staff writer at The New Yorker and a national fellow with New America Foundation.JoDS guest editor Ethan Zuckerman directs the Center for Civic Media at MIT, and teaches at MIT’s Comparative Media Studies and Writing program and at MIT’s Media Lab where he is associate professor of the practice. QAnon and the Emergence of the Unreal · Journal of Design and Science. The Grass Valley Charter School in northern California teaches 500 students from kindergarten to eighth grade using principles from Outward Bound and other “active learning” methods. 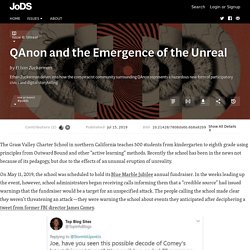 The Enlightenment is Dead, Long Live the Entanglement · Journal of Design and Science. We humans are changing. 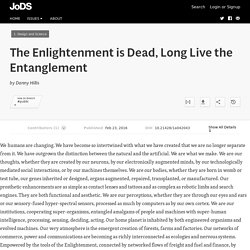 We have become so intertwined with what we have created that we are no longer separate from it. We have outgrown the distinction between the natural and the artificial. Age of Entanglement · Journal of Design and Science. To every age, a relic: a loom, an automobile, the PC, a 3D printer. L’Encyclopédie was its period’s signpost, cataloguing and concretizing the boundaries between the disciplines, which emerged from the “long eighteenth century” of the Enlightenment. For the next quarter of a millennium, we remained indoctrinated to the shibboleths of this relic, operating within discrete silos-of-thought.

At the dawn of the new millennium, the meme “antidisciplinary” appeared, yanking us out of Aristotle’s shadow and into a new ‘Age of Entanglement. Effect of Behavioral Realism on Social Interactions Inside Collaborative Virtual Environments. The increased availability and consumer adoption of virtual reality (VR) headsets has led to the active development of social interaction platforms wherein people are able to use VR systems to communicate with each other inside virtual environments despite being in different geographical locations. For researchers and organizations creating these platforms, one of the key questions is how avatars (i.e., digital representations controlled by users in mediated environments [Fox et al., 2015]) should be designed to best represent users and maximize intended interpersonal outcomes.

Recent developments in social VR platforms include Sansar, VRChat, AltspaceVR, PlutoVR, High Fidelity, and Facebook's Spaces. Another key difference is the level of behavioral realism avatars exhibit. The Age of Secrecy and Unfairness in Recidivism Prediction · Harvard Data Science Review. Differential Privacy and Social Science: An Urgent Puzzle · Harvard Data Science Review. Accessing and combining large amounts of data is important for quantitative social scientists, but increasing amounts of data also increase privacy risks. Should We Trust Algorithms? · Harvard Data Science Review. There is increasing use of algorithms in the health care and criminal justice systems, and corresponding increased concern with their ethical use. But perhaps a more basic issue is whether we should believe what we hear about them and what the algorithm tells us. BBC Radio 4 - Beyond Today, Hannah Fry: how scary are algorithms really?

BBC Radio 4 - Beyond Today, Did Huawei just win a tech war? BBC Radio 4 - Beyond Today, Why are so many Vietnamese people trafficked? BBC Radio 4 - Beyond Today, How do you stop a terror attack? New_Consumer_Summit_Report_2016 copy.pdf. Huawei Hit With Racketeering Charge in Expanding U.S. Case. The U.S. raised the stakes in its battle with Huawei Technologies Co., using a law historically associated with prosecuting mafia figures to claim the Chinese company engaged in decades of intellectual property theft. Huawei, the world’s largest maker of telecommunications equipment, and Chief Financial Officer Meng Wanzhou had already faced criminal charges. The fresh allegations, announced Thursday, up the ante by including racketeering conspiracy, increasing the potential punishment. Alibaba Warns Virus Having Broad Impact on Chinese Economy.

Source: VCG/Visual China Group Alibaba Group Holding Ltd. warned that the coronavirus responsible for killing more than 1,300 people in China is exerting a fundamental impact on the country’s consumers and merchants, and will hurt its revenue growth in the current quarter. Alibaba, the first major Chinese technology corporation to report results since the epidemic emerged in January, said the virus is undermining production in the economy because many workers can’t get to or perform their jobs. Digital Fashion - Hot:Second - 20.20 - Brand Experience Agency.

Hot:Second is the world’s first circular economy concept store trading in physical products for digital experiences. How will fog computing change how we live and work? The five big technology trends for 2020. The five big technology trends for 2020. How to manage your supply chain's carbon footprint. IN FOCUS RxCYCLE: DROP TWO.

Anatomy of an AI System. Turner Prize nominees form a collective so they all win. Creative agency buys $10k of blank ad space to give everyone a break from ads. Riri curates Rihannazine for i-D, celebrating pioneers for change in 2020. Björk used Microsoft AI to write unnerving hotel lobby music. Despacito Art School – Open School East. GraphicDesign& The Other Side: An Emotional Map of Brexit Britain. “Pride, anger, heartbreak, revenge”: Lucienne Roberts on how visual communication can help us overcome our divisions. Qweens’ Speech shines a light on the “impossible broadness” of the LGBTQIA+ community. Get your degree on Instagram! (courtesy of School)

New Research Explains How Solar Panels Could Soon Be Generating Power at Night. Meet Bookshop, the Startup Helping Indie Booksellers Take on Amazon. Europe Limits Government by Algorithm. The US, Not So Much. The 7 Industries Amazon Could Disrupt Next. Business Reporter BrandVoice: Why Sustainable Businesses Can Both Profit And Pay It Forward [Video] The Ratings For Award Shows Are Tanking. Four Reasons Why Coronavirus Outbreak Could Lower China’s Economic Growth Down To 5%