Future - Why stress is dangerous - and how to avoid its effects. In November 2017, two eye surgeons from a hospital in Beirut reported an intriguing case of visual loss in a colleague. 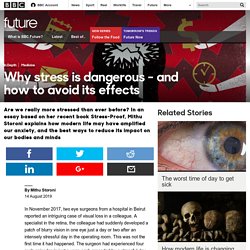 A specialist in the retina, the colleague had suddenly developed a patch of blurry vision in one eye just a day or two after an intensely stressful day in the operating room. Burnout Runs Deeper Than “Too Much Work” Burnout — a state of physical and emotional exhaustion often followed by apathy and illness — is ubiquitous across industries. 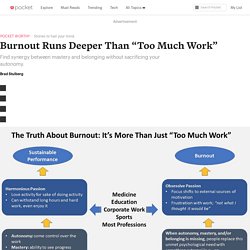 Physicians, businesspeople, artists, teachers, and athletes all have high rates of burnout. As a matter of fact, most studies show that between 40 and 50 percent of people are experiencing burnout at any given time. This is cause for great concern. Research shows that burnout and underperformance go hand-in-hand. Physical (e.g., speed, strength), cognitive (e.g., alertness, focus, creativity), and emotional (e.g., patience, resilience) ability all decline. The most commonly discussed way to reduce burnout is to change how we work.

Harmonious passion is when an individual becomes completely absorbed in an activity because they love how the activity itself makes them feel. Stress and the Social Self. Amygdala Hijack: What It Is, Why It Happens & How to Make It Stop. Different functions are performed by different parts of your brain. To understand amygdala hijack, you need to know about two of these parts. Amygdala The amygdala is a collection of cells near the base of the brain. There are two, one in each hemisphere or side of the brain. This is where emotions are given meaning, remembered, and attached to associations and responses to them (emotional memories). The amygdala is considered to be part of the brain’s limbic system. Fight or flight Early humans were exposed to the constant threat of being killed or injured by wild animals or other tribes. When you feel threatened and afraid, the amygdala automatically activates the fight-or-flight response by sending out signals to release stress hormones that prepare your body to fight or run away.

When a Stress Expert Battles Mental Illness - Outside - Pocket. Choice page. How Your Mind Gets Better at Processing Bad News - aeon - Pocket. Pressure Doesn’t Have to Turn into Stress - Harvard Business Review - Pocket. Cat Yu for HBR When I was in my late twenties, I was diagnosed with stomach cancer. 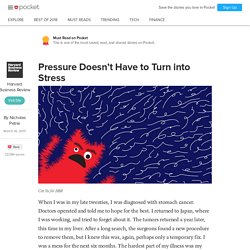 Doctors operated and told me to hope for the best. I returned to Japan, where I was working, and tried to forget about it. The tumors returned a year later, this time in my liver. After a long search, the surgeons found a new procedure to remove them, but I knew this was, again, perhaps only a temporary fix. Then I met a man who changed my outlook.

Consent Form. Danes are some of the happiest people in the world, and they also happen to have a lot of cool words for ways to be happy. 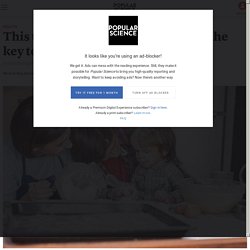 You may have heard about “hygge,” which has been the subject of countless books, articles and commercials. Often mistranslated to mean “cozy,” it really describes the process of creating intimacy. But another word “pyt”—which sort of sounds like “pid”—was recently voted the most popular word by Danes, beating out “dvæle” (to linger) and “krænkelsesparat” (ready to take offense). Pyt doesn’t have an exact English translation.

It’s more a cultural concept about cultivating healthy thoughts to deal with stress. 'You will have an emotional reboot': the ultimate guide to stress at every age. 0-16 years Triggers“Children are really the canaries in the mineshaft of human society. 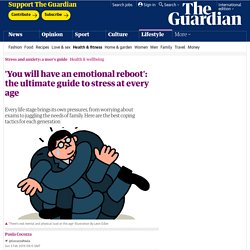 They are the individuals within our cultures that are the most sensitive to the difficulties – and stresses – that societies experience,” Tom Boyce tells me. Professor of pediatrics and psychiatry at the University of California, he specialises in the treatment of three- to eight-year-olds. Major stressors in this age group include marital conflict, violence in the home, violence in the community, problems with parental mental health – a mum or dad who is depressed – maltreatment and disciplinary behaviours that become punitive. On top of all that, as Dominique Thompson, a former student health GP who treated clients aged 11 and up, points out: “School is a source of huge anxiety.” Pressure Doesn’t Have to Turn into Stress - Harvard Business Review - Pocket. Why Exhaustion Is Not Unique to Our Overstimulated Age - aeon - Pocket. Is ours the most exhausting age ever? 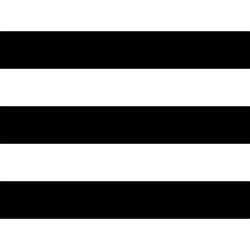 Many sociologists, psychologists and cultural critics argue that the rapid spread of exhaustion syndromes such as depression, stress and burnout are consequences of modernity and its challenges. The argument goes that human energy levels have basically remained static throughout history, while the cognitive, emotional and temporal demands on the modern subject have increased so sharply that a chronic deficit of inner resources ensues. The Science of Stress and How Our Emotions Affect Our Susceptibility to Burnout and Disease - Brain Pickings - Pocket. I had lived thirty good years before enduring my first food poisoning — odds quite fortunate in the grand scheme of things, but miserably unfortunate in the immediate experience of it. 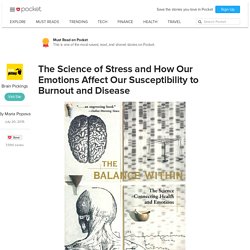 I found myself completely incapacitated to erect the pillars of my daily life — too cognitively foggy to read and write, too physically weak to work out or even meditate. The temporary disability soon elevated the assault on my mind and body to a new height of anguish: an intense experience of stress. Even as I consoled myself with Nabokov’s exceptionally florid account of food poisoning, I couldn’t shake the overwhelming malaise that had engulfed me — somehow, a physical illness had completely colored my psychoemotional reality.

This experience, of course, is far from uncommon. Pre-modern medicine, in fact, has recognized this link between disease and emotion for millennia. Chart of the four humors from a 1495 medical textbook by Johannes de Ketham.