Mid-Century Modern Style Design Guide, Ideas, Photos. When Mid-century modern started making waves a few years back, the instant reaction was to dismiss it as an aberration. 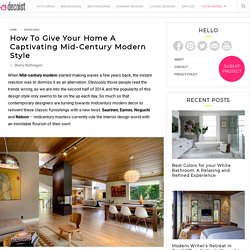 Obviously those people read the trends wrong, as we are into the second half of 2014, and the popularity of this design style only seems to be on the up each day. So much so that contemporary designers are turning towards midcentury modern decor to reinvent these classic furnishings with a new twist. Saarinen, Eames, Noguchi and Nelson – midcentury masters currently rule the interior design world with an inimitable flourish of their own! View in gallery Obviously popular shows like Mad Men and the minimal aesthetics of modern gadget makes like Apple are pushing us towards the sleek and unfussy appeal of midcentury modern. 1. Let us make no mistake about it; the midcentury modern era was the time when the world first started moving towards the idea of minimalism.

Mid Century Modern Furniture for your Home and Office. Pismo Organic Blanket. Modern, Mid Century & Scandinavian Furniture. It costs less than $60 to have a baby in Finland. How? In this installment of "CBS This Morning's" four-part series, The World of Mothers, we take a look at what motherhood is like in Finland. 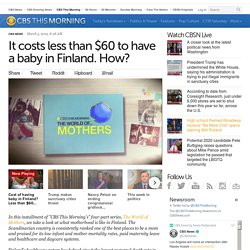 The Scandinavian country is consistently ranked one of the best places to be a mom and praised for its low infant and mother mortality rates, paid maternity leave and healthcare and daycare systems. Finland's healthcare system has helped give it the lowest maternal death rate in the world -- and it's available to everyone for next to nothing. Dr. Aydin Tekay is the chief physician at a labor ward in Finland where every mother there gets a private room and even the option of a water birth. The cost? The maternal death rate in the U.S. has nearly doubled over the last three decades; in Finland they've cut it in half.

At a play group in Helsinki, we met Laura Smith from Detroit who's living there with her Finnish husband and their 10-month-old baby Ella. "My concerns mattered, my voice mattered. . © 2019 CBS Interactive Inc. Why Finland Drink More Coffee Than Any Other Country. Updated: 25 September 2017 When you try to imagine the coffee capital of Europe, you would probably think of Italy, Sweden, or perhaps the artisan coffee shops of Paris. But in actual fact, Finnish people consume more coffee per capita than any nation in the world. Eight or nine cups a day is normal in the country, with some consuming as many as 30 (not recommended as this can lead to serious health problems). This trend more than likely originated due to the extreme cold, with temperatures dipping as low as minus 40 degrees in Northern Finland, which makes a warm thermos or coming home to a cup of coffee extremely inviting. During the short but hot summers, iced coffee is just as much as a comfort.

It may seem strange then that multinational coffee chains such as Starbucks haven’t caught on in the country and are found only in the capitol city of Helsinki and its airport. Iced coffee with a Runeberg torte Finland Coffee Customs. Why Finland Drink More Coffee Than Any Other Country. For the Love of Food: Pulla – Finnish Cardamom-Spiced Sweet Buns — My Blue&White Kitchen. Makes about 16 pulla I could make these in my sleep. 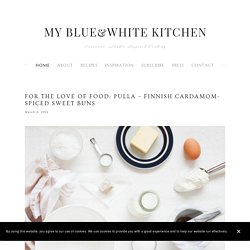 That's how well I know this lovely, traditional Nordic treat. Pulla, or bulle in Swedish, are probably the most loved baked good both in Finland and in Sweden. After 7 months (!!) Of blogging, it's unbelievable that I haven't posted a single pulla recipe yet. This is the most basic pulla recipe but there are endless variations to discover – cinnamon rolls, braided loaves, "Boston cake" (which has, at least to my knowledge, nothing to do with Boston itself)...

A few notes: For the best result, make sure that all your ingredients are at room temperature. For the egg wash:1 egg1 tbsp water pearl sugar, to sprinkle To make the doughIn a large mixing bowl (you can make the dough by hand, like me, or in a stand mixer), combine the lukewarm milk and crumbled yeast. Don't overwork the dough or you'll end up with hard buns, not soft as we want them to be.

To shape and bake the bunsLine two baking sheets with parchment paper. For the Love of Food: Pulla – Finnish Cardamom-Spiced Sweet Buns — My Blue&White Kitchen.