Where to look for job opportunities in 2021 after a year of record unemployment. "Tech heads, Geo Junkies and Supercomputer Heroes please apply! 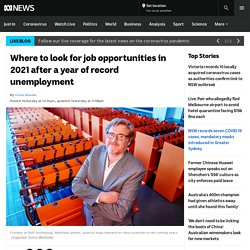 " Key points: Of all occupations, demand for labourers grew the most in 2020STEM jobs were also very resilliant in 2020In 2021, data analysts, call centre operators and health workers are expected to be in demand That's the rather unusual call out for staff to work at a burgeoning Australian high-performance computing company. DUG Technology had its humble beginnings in a backyard shed in the Perth suburb of Subiaco in 2003. Today, it employs about 300 staff across four international offices, including Perth, where a bright orange supercomputer named "Bruce" is used to store and interpret big, complex data sets for an increasing list of clients. After a year of turmoil in 2020, the growth of jobs in anything to do with data is one of the few certainties as we continue to navigate the pandemic in 2021. Australia is witnessing a record regional jobs boom. Here's where to find them in every state - ABC News. While our cities remain in recession, a record 54,000 new job vacancy advertisements in regional Australia has the bush eyeing off a long-awaited economic and population turnaround. 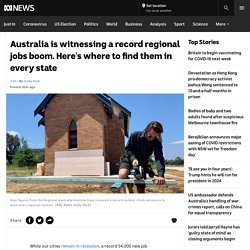 Key points: New data from the Regional Australia Institute reveals there are 54,000 jobs available in the regions The institute says there are opportunities for engineers, accountants, lawyers and doctorsBut as rural towns grow, there are concerns infrastructure may not be keeping up. Northern NSW job ads rise, but businesses concerned over high post-COVID unemployment - ABC News. Mechanic Kevin Flew has been trying all year to fill a vacancy at his automotive workshop in northern New South Wales, but has been unable to find anyone prepared to do the job. 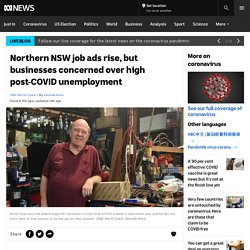 Key points: North Coast job advertisements are up by a third compared with last OctoberUnemployment rates in the region are up compared with pre-COVID averagesDemand for staff could result in better wages and conditions in some industries "The money that they are getting offered up in this area particularly isn't what they want to be paid, so they would rather do no work or just pick up some piecemeal work in another industry," Mr Flew said. Mr Flew's experience is just one piece of a complex puzzle evolving as the economic downturn caused by the COVID-19 pandemic appears to ease. In the north coast region, stretching from Taree to the Queensland border, job vacancy ads for the month of October are up by a third compared with the same period last year. COVID-19 pandemic offers 'single greatest opportunity' to reverse Australia's brain drain. But there are catches - ABC News.

Hannah Durack was so certain she was only coming back to Australia for a short trip that she left her New York apartment entirely untouched. 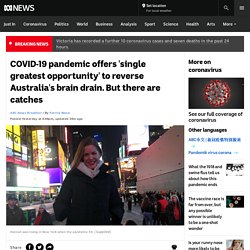 "I threw out the milk, I asked a friend to pop over and water the plants now and then, but I did literally nothing else to the apartment because I knew that we were coming back," she said. "I was wrong. " That was at the end of March, as the coronavirus pandemic swept the globe but took a particular stranglehold on New York City. Young people's incomes have fallen over past decade as older Australians powered ahead, report finds - ABC News. Lone female boilermaker MacKenzie Gulland hoping more women will join her - ABC News. Iconic Gold Coast bikini designer Paula Stafford celebrates 100th birthday - ABC News. COVID-19 has put jobs in danger. How many workers don't have leave entitlements? - Fact Check. RMIT ABC Fact Check Updated about 2 hours agoMon 30 Mar 2020, 1:28am As the world struggles to cope with the COVID-19 pandemic, workers without paid leave entitlements are clearly among the most vulnerable in the sudden economic downturn. 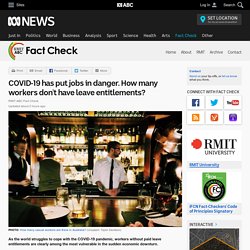 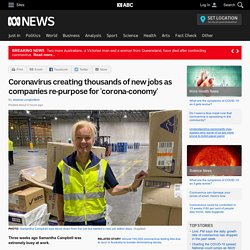 The operations manager for a liquor supply logistics company was planning for major events in Melbourne — the Grand Prix, AFL, music festivals — and was looking at adding more staff. Then two weeks ago, major events started being cancelled. Jessica Ellis's income protection insurance win sets a precedent for improving workplace gender equity. Posted 33 minutes agoTue 3 Mar 2020, 10:15pm Jessica Ellis began her electrical apprenticeship knowing she was entering what was traditionally a man's world, but it was not until she fell pregnant that she realised just how true that was. 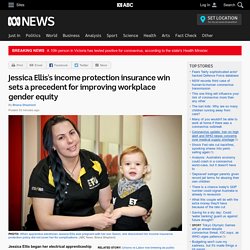 Key points: Ms Ellis took on her income protection insurer and won a payoutThe company has updated its policy to make it fairer for female workersIt comes amid new criticism of an increasing gender pay gap Despite having comprehensive income protection insurance, when Ms Ellis suffered complications and was forced to step away from the tools earlier than planned, she discovered a loophole in her policy left her with no income. "Unfortunately, my pregnancy highlighted that it [the policy] was quite flawed and it didn't cover pregnancy-related illnesses unless you were hospitalised overnight," she said. "Unfortunately, though, that means no income. " Generation Z employees pose dilemma for some employers, and technology is key for retaining younger staff.

Posted about an hour agoThu 27 Feb 2020, 9:32pm Grocery outlet owner, Kevin Allen, hired three Generation Z butchery apprentices, none of whom completed their training, before he found 'the one'. 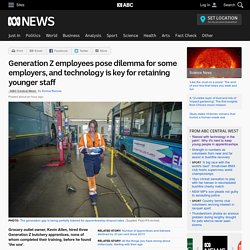 Key points: Completion rates for apprenticeships in NSW are as low as 45 per cent in some tradesA psychologist has been running public sessions to help employers understand young employees, discussing technology uptake, attitudes, and values of Gen ZsGen Zs are born from the mid-1990s onwards and Millennials are born from the mid-80s to the mid-90s Mr Allen said while taking a seminar led by a workplace psychologist, he learnt that Gen Z workers, born from the mid-1990s onwards, were raised in a different technological age from that of their predecessors, the Millennials, born from the mid-80s to the mid-90s. Underemployment in Australia is on the rise and it may only get worse, experts say. Updated earlier today at 9:17amWed 26 Feb 2020, 9:17am Desiree Sheets-Chavolla works as a cleaner at Sydney Airport. 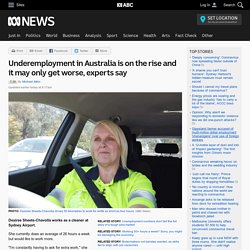 She currently does an average of 26 hours a week but would like to work more. Coronavirus: What happens when a COVID-19 pandemic is declared? Updated 10 minutes agoWed 26 Feb 2020, 1:38am With coronavirus now spreading through populations far from its origins in China, experts say it's become a matter of when — not if — the outbreak becomes a pandemic. 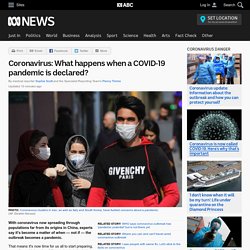 That means it's now time for us all to start preparing, according to University of Queensland virologist Ian Mackay. "We need to be aware that we are probably heading for that pandemic even if the World Health Organisation doesn't want to call it that yet," Professor Mackay says. Overqualified migrants present a $6 billion opportunity for Australia's economy, study shows. Posted about 11 hours agoWed 15 Jan 2020, 10:19pm Qusay Al-Turkey was a distinguished archaeologist, author, university professor and media commentator back in his home country of Iraq, before moving to Perth in 2017. Key points: Are elite schools reinforcing sexist stereotypes? Researchers say the answer is on the field. Posted about 4 hours agoFri 3 May 2019, 9:05pm Men on average still earn more money than women, and some researchers believe the amount of space boys have during high school could be contributing to the issue.

Jobs growth may be slowing, but is it enough to change the RBA's mind? Posted about 3 hours agoSat 16 Mar 2019, 8:21pm "It's jobs, stupid," to paraphrase Bill Clinton — and this week's employment data may prove pivotal in the debate over where interest rates should be heading. The week in finance: February labour force figures (Thursday) expected to show unemployment at 5pc and 15,000 job addedNufarm (Wednesday) and Sigma Healthcare (Thursday) release resultsUS and EU manufacturing surveys (Friday) will give insights in the global economy Continued jobs growth eroding unemployment and pushing up wages is central to the Reserve Bank's belief it does not need to cut rates.

Those pushing for cuts believe the jobs boom is about to crack under the weight of a mass of signals pointing to a broadening economic slowdown. A weak set of numbers on Thursday could well see the market price in two rate cuts this year (currently the betting is one) and more pressure on the RBA to shift its neutral stance. Creating a million new jobs in five years is not as tough as it sounds. Analysis Posted about an hour agoTue 29 Jan 2019, 8:16pm "Over the last five years we've delivered more than a million jobs," Scott Morrison proclaimed when the Federal Government hit that promised milestone last year.

On Tuesday, he made a new pledge for the Government — "to see 1.25 million jobs created over the next five years". On the face of it, that might sound like an impressive number, but a million or so jobs ain't what it used to be. Economists say Australia needs to add about a million new jobs every five years just to keep pace with rising population growth and stop the unemployment rate from climbing. Unemployment edges higher as more people look for work. Updated Thu at 4:07amThu 20 Dec 2018, 4:07am The unemployment rate has edged up to 5.1 per cent, despite the creation of more than 37,000 jobs last month. Key points: The more stable trend unemployment figure falls from 5.2 to a six-and-half-year low of 5.1 per centThe widely watched seasonally adjusted unemployment number rose from 5 to 5.1 per centThe ABS says 37,100 jobs were created in November, but they were dominated by part-time positions Despite the better-than-expected addition of 37,100 jobs to the economy in November (most economists had been tipping around 20,000), the unemployment rate edged up to 5.1 per cent due to an increase in the proportion of the population in work or looking for it, known as the participation rate, which rose to 65.7 per cent.

The Bureau of Statistics estimates also showed that the increase in employment was in part-time work, where 43,400 new positions were added, while 6,400 full-time jobs were lost. ACT and NSW have lowest jobless rates, WA highest. Enterprise bargaining faces extinction and it could lower your wages, warns think tank. Fact check: Are company profits growing five times faster than Australians' wages? - Fact Check. Posted about 2 hours agoMon 24 Sep 2018, 12:23am The claim Australia's new Prime Minister and Treasurer have both been keen to trumpet good news about the economy in the wake of recent political turmoil.

In early September, the Australian Bureau of Statistics released National Accounts figures, showing the economy expanded by a seasonally adjusted 0.9 per cent in the June quarter and by 3.4 per cent over the year. Population and participation make all the difference to unemployment and wages. Analysis Posted 17 minutes agoSun 16 Sep 2018, 3:47am Could there finally be a sniff of latent wage growth in the air? Jobs boom rolls on as unemployment stays steady.