3D Printed Aluminum Lattice Cube Weighs Just 3.9g & Holds up to 900lbs (408kg) – Over 100,000 Times Its Weight! When it comes to lightweight materials that provide superior strength, there are only a handful of options to choose from. 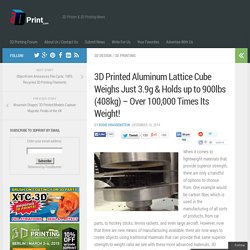 One example would be carbon fiber, which is used in the manufacturing of all sorts of products, from car parts, to hockey sticks, tennis rackets, and even large aircraft. However, now that there are new means of manufacturing available, there are now ways to create objects using traditional materials that can provide that same superior strength-to-weight ratio we see with these more advanced materials. 3D printing is one means by which designers, developers, architects, and manufacturers are discovering new ways of providing more sophisticated designs which do not change the physical properties of the materials they use, but instead provide more advanced end-product properties. These more advanced end-product properties include objects and parts of objects which can bear more weight, with less materials use and a reduction in their own weight. The most successful 3D printed product you've never heard of. By on Sep 22 2014 , 08:30:42 What is the most successful 3D printed product in the world? 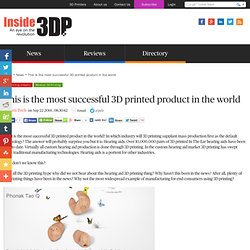 Yeggi - Printable 3D Models Search Engine. Spirula – Akemake. The small internal shell of the deep sea squid like species is a quite familiar object to many beachcombers. 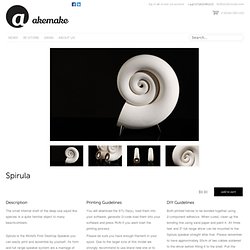 Spirula is the World's First Desktop Speaker you can easily print and assemble by yourself. Its form and full range speaker system are a marriage of quality sound and modern aesthetics - producing a timeless piece that allows you to stream 3D printing ideology with us. Spirula has the perfect size to fit into most home and office desktop setups, or to be an original design piece of your living room.

You will download the STL file(s), load them into your software, generate G-code load them into your software and press RUN if you want start the printing process. Please be sure you have enough filament in your spool. Does it sound complicated? Both printed halves to be bonded together using 2-component adhesive. CreoPop - The world's first 3D pen with cool ink. Finally, Here's a 3D Printing Pen That Looks Like a Pen.

Do you remember the 3Doodler? 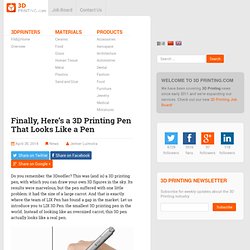 This was (and is) a 3D printing pen, with which you can draw your own 3D figures in the sky. Its results were marvelous, but the pen suffered with one little problem: it had the size of a large carrot. And that is exactly where the team of LIX Pen has found a gap in the market. Finally, Here's a 3D Printing Pen That Looks Like a Pen. YouMagine.com. Introduces Flexible Full-Color Multi-Material 3D Printing. Nike launches Summer 2014 Football Equipment Innovations. This summer, Nike launches its first 3D printed bag and a new shin guard built specifically for speed. 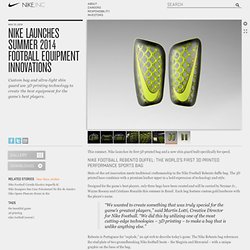 State-of-the-art innovation meets traditional craftsmanship in the Nike Football Rebento duffle bag. The 3D printed base combines with a premium leather upper in a bold expression of technology and style. Designed for the game’s best players, only three bags have been created and will be carried by Neymar Jr., Wayne Rooney and Cristiano Ronaldo this summer in Brasil. Each bag features custom gold hardware with the player’s name. “We wanted to create something that was truly special for the game’s greatest players,” said Martin Lotti, Creative Director for Nike Football.

Rebento is Portuguese for “explode,” an apt verb to describe today’s game. Taking cues from the Nike Flyknit pattern of the Magista and Mercurial, the laser-sintered nylon creates an intertwined weave on the bag’s 3D printed base. The FlyLite Guard provides the most anatomical fit to date. Expiring patents were supposed to boost the 3D printing market. They haven’t. By James Robinson On June 6, 2014 At the end of January, a series of patents filed by Carl Deckard in the 1990s for selective laser sintering (SLS) — a high-quality 3D-printing technology — expired. 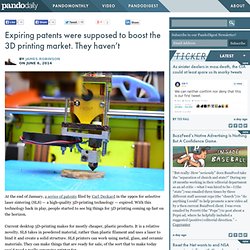 With this technology back in play, people started to see big things for 3D printing coming up fast on the horizon. Large Enough to 3D Print a Boat or SUV, New Full Color Chinese 3D Printer is Unveiled. China seems to be one of the nations who are establishing themselves at the forefront of 3D printing innovation. 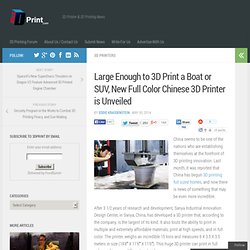 Last month, it was reported that China has begun 3D printing full sized homes, and now there is news of something that may be even more incredible. After 3 1/2 years of research and development, Sanya Industrial Innovation Design Center, in Sanya, China, has developed a 3D printer that, according to the company, is the largest of its kind. It also touts the ability to print in multiple and extremely affordable materials, print at high speeds, and in full color. The printer, weighs an incredible 15 tons and measures 6 X 3.5 X 3.5 meters in size (19’8″ X 11’6″ X 11’6″). This huge 3D printer can print in full color, and in many different materials. This new 3D printer is capable of printing objects as large as 3.8 × 2.4 × 1.8 meters (approximately 12’6″ X 7’10″ X 5’11″) in size. 450℃, it should work.

Top Printers, Materials & Manufacturers. 3D Printing Enters the Bronze Age at Shapeways. Just over 5000 years ago man entered the Bronze Age, now you too can have access to the material that mankind used to build the tools that transformed civilization into what it is today. 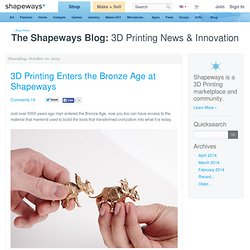 The 3D printed Bronze at Shapeways is a high-detail metal with a deep red color similar to rose gold. It has a subtle marbling effect, and the silvery highlights give each piece their own unique character. As with our 3D printed Brass, this new material will be available at Shapeways as Raw Bronze and Polished Bronze with the exact same design rules as Brass, so items you have designed for one material, will be printable in the other.

Crystal Ring in Polished Bronze left vs Raw Bronze right. Vienna Open 2013 - The New Design Playground - Vortrag von Ronen Kadushin. Shapeways - Make & Share Your Products with 3D Printing. "You can design anything and have it 3D-printed" 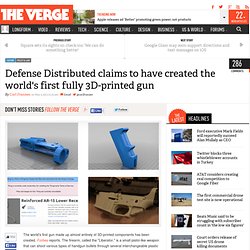 The firearm, called the "Liberator," is a small pistol-like weapon that can shoot various types of handgun bullets through several interchangeable plastic barrels. It's still a prototype for now and reportedly has not been tested — yet. But that's coming soon, according to its creators at Defense Distributed, an Austin, Texas-based collective of gun access advocates led by crypto-anarchist Cody Wilson. The group told Forbes that once the gun has been tested and proven to be functional, they will publish the digital blueprints for it on their website, Defcad.org, allowing anyone to make it. Prototype 3D printed gun from Defense Distributed, Credit: Michael Thad Carter for Forbes. made up of 16 different pieces of plastic. 3D Printed Robot InMoov Open Source. Presspin. World’s First 3D Printing Photo Booth. 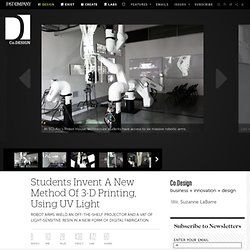 Their project, Phantom Geometry, is not a single design but an entirely new production methodology that uses light from an off-the-shelf projector to cure a special resin into complex, adaptable models. It was developed in SCI-Arc’s Robot House, where students can experiment with six state-of-the-art Staübli robotic arms under the guidance of Peter Testa and Devyn Weiser. Think of their system as you would a 3-D printer. One robotic arm supports a souped-up digital projector at a stable height.

A second arm holds a vat of honey-like resin similar to what the dentist uses to make molds of your teeth. Typically in digital fabrication, you submit a fully resolved model which emerges, perfectly replicated, a few hours later. Shapeways 3D Printing & the Culture of Creativity. Replicator™ 2 Desktop 3D Printer. The Army Is Deploying 3D Printers To Afghanistan. Soldiers are not always prepared for what the battlefield throws at them. That’s why the Army’s Rapid Equipping Force exists.

They make sure that soldiers are prepared for anything they will encounter. The team of engineers that make up REF were already fast, but the latest innovation involving 3D printers makes them even faster. The military is deploying what they call the Expeditionary Lab – Mobile to locations in Afghanistan. The lab is a simple 20 feet long shipping container that’s packed with the latest technologies including a 3D printer, industrial CNC machine, plasma cutters and more. The tools inside the lab let the engineers make new parts for guns and other equipment on the spot in Afghanistan instead of having to ship the new equipment from overseas. What’s interesting is the use of 3D printers and CNC machines. There is currently only one lab deployed in Southern Afghanistan, but the military is planning on deploying a second to the Eastern part of the nation in the fall.

3D Printing Becomes More Awesome With The Help Of Lasers. 3D printers are more than just a cool way to make your own plastic models. The technology has numerous medical applications from creating organs to helping a little girl move her arms. Those examples all involve relatively large samples though.

What can be done about objects that are less than a nanometer in size? Researchers at the Vienna University of Technology have come up with a new form of 3D printing called “3D Photografting.” The technology allows scientists to attach molecules to an object on the micrometer level. The Next Battle for Internet Freedom Could Be Over 3D Printing. Editor’s note: Rick Kelly (@_rickkelly) is an adjunct political science professor at BYU-Idaho and MBA student at UNC-Chapel Hill.

Remember SOPA? In case you’ve forgotten already, earlier this year some Congressional legislators attempted to protect intellectual property through the Stop Online Piracy Act (SOPA). The language in the bill was far-reaching and ambiguous; thus prompting concern that application of the law would extend beyond its intent. TechCrunch’s own John Biggs explained that SOPA “would allow the US government to essentially ‘turn off’ part of the Internet that it doesn’t like.” Many people reacted adversely to the proposed legislation and after a wave of activism encouraged by non-profits, corporate titans, and thought leaders, SOPA never came close to being enacted. Billionaire Peter Thiel donates to 3D meat bioprinting lab. The Thiel Foundation has made a six-figure grant to a series of biotechnology startups, including a company that wants to 3D print meat. 3D Printing Is A Billion Dollar Industry [Infographic] 3D printed meat: It's what's for dinner. 3D printing has been used to create running shoes , medical implants , and, to the delight of firearm enthusiasts, a .22 caliber handgun.

A Working Assault Rifle Made With a 3-D Printer. Get ready. It's now possible to print weapons at home. An amateur gunsmith, operating under the handle of "HaveBlue" (incidentally, "Have Blue" is the codename that was used for the prototype stealth fighter that became the Lockheed F-117), announced recently in online forums that he had successfully printed a serviceable .22 caliber pistol.

The 'chemputer' that could print out any drug. Hacker Opens High Security Handcuffs With 3D-Printed And Laser-Cut Keys. Designed to Win: 3D Printing Could Help Athletes Break World Records. Airbus Explores Building Planes With Giant 3D Printers  5 Ways 3D Printing is Responding to Global Change. How 3D printing will change the world. 3D printer price. Notes: The above list is sorted by price. Customize and create 3D printed products. Welcome to the Future of Stuff. Tinkercad - Design a new thing.