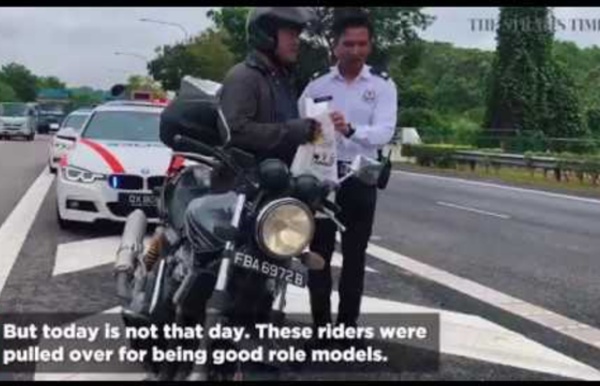 (Negative Reinforcement - Resource Two) Website: Driving Centre - Safe Driving Course - Traffic Police The Safe Driving Course is introduced under Driver Improvement Points System (DIPS) as a ‘circuit breaker’ for motorists who are close to being liable for their first suspension under DIPS. It aims to overcome and correct dangerous road behaviour through early corrective education and encourage positive road behavioural change. Four demerit points will be deducted for motorists who complete both theory and practical training.

2020 - Road Safety Month launched as Singapore reopens, Singapore News The eighth Singapore Road Safety Month was launched on Tuesday, with traffic expected to increase as Singapore entered the first phase of its post-circuit breaker reopening. Posters and banners will be put up in trains and at bus shelters and lamp posts during the month-long campaign to remind pedestrians to "ensure that all vehicles have come to a stop before crossing" and motorists to "slow down when approaching traffic lights". First-prize winners of a road safety art competition in March will have their works printed on ez-link cards for distribution. Although mainly located in the heartland and areas near schools, banners will be displayed - for the first time - in private residential estates in Bukit Timah, said the police and the Singapore Road Safety Council. The campaign is jointly organised by the two, together with the Land Transport Authority, Ministry of Education, People's Association and Automobile Association of Singapore.

Driver Improvement Points System (DIPS) - CabbyHub Singapore’s demerit points system named the Driver Improvement Points System (DIPS) was introduced on 1 March 1983. DIPS is designed to identify and rehabilitate errant drivers through a system of rewards and punishments. Errant motorists are thus encouraged to improve their driving behaviours on the roads with incentives to expunge their demerit points and previous suspension record as well as remission of suspension period. Road Safety Tips A safe road journey cannot be taken for granted! Like Gracious Joseph, remember to always exercise patience and graciousness. Stay alert, drive carefully and follow traffic rules, signs, and signals. Follow these safe-driving tips and habits to enhance your experience on the roads, and make your journeys more safe and pleasant. Never drink and drive. Never get behind the wheel when you’re tired.

(2019 News) Website: Clementi crash that killed NUS student: $5,000 bail for driver who was allegedly speeding , Courts & Crime News SINGAPORE - A man who was allegedly speeding when his car ploughed into a taxi, causing an accident that killed a National University of Singapore (NUS) student, has had his bail set at $5,000. Ng Li Ning, 22, is facing a dangerous driving charge and his pre-trial conference took place at the State Courts on Friday (Oct 11). He is accused of driving at a speed of 92kmh when his car struck Yap Kok Hua's taxi along Commonwealth Avenue West at around 7.30pm on April 19 last year. The speed limit there was 70kmh, according to court documents.

Road accident statistics in Singapore 2020 Last Updated: January, 2020. Latest available data from May, 2019. Highlights There were 7,690 road accidents involving injuries in 2018120 people were killed in traffic accidents in 2018Elderly pedestrians accounted for two-thirds of all pedestrian fatalities. (1 in 2 accidents involving elderly pedestrians was due to jaywalking)Motorcyclists and pillion riders account for about 1 in 2 of overall road fatalities73% of heavy vehicle drivers speed when traffic is lightSingapore’s road fatality rate of 2.73 per 100,000 citizens is higher than London, Hong Kong and Tokyo. Deaths per 100,000 people Safe Driving Course - A Negative Reinforcement SINGAPORE — Motorists who have accumulated more than half of their maximum allowable demerit points now have a chance to redeem themselves via the Traffic Police’s Safe Driving Course (SDC), set to be introduced next month. Designed to educate motorists on safe driving techniques, correct dangerous driving behaviour and encourage good road habits, the SDC is an enhancement to the Driver Improvement Points System (DIPS). Motorists who complete the SDC will have three demerit points cancelled from their driving records, but they can only get demerit points cancelled twice during their lifetime.

2019 - Road Safety Campaign RoadSense Carnival On 6 July 2019, Traffic Police organised the RoadSense Carnival at the Ngee Ann City Civic Plaza. The inaugural RoadSense Carnival was graced by Mr Amrin Amin, Senior Parliamentary Secretary for Ministry of Home Affairs & Ministry of Health. The event’s theme was ‘Take the Road to Responsibility’, and this event was organised to educate road users in Singapore about the importance of graciousness to create a more pleasant road user experience for all Singaporeans. More than 3,600 people attended the event to learn about road safety through a line-up of fun and engaging games and activities. Traffic Police also launched eight characters, known as “The Responsibles”, to reinforce the need for a shared and collective sense of responsibility for our actions on the roads in Singapore.

The 5 Different Types of Traffic Cameras in Singapore (Photo Credit: Pexels) To deter speedsters from driving recklessly, the Land Transport Authority(LTA) and Traffic Police have put in place five different types of traffic enforcement cameras around the island. Here's a detailed guide on all five of them. Updated: 11 May 2018, Friday 1. DirectAsia.com Safer Roads Campaign 2015 In conjunction with the final day of the Home Team Festival 2015, the Traffic Police (TP) and the Singapore Road Safety Council (SRSC) held the DirectAsia.com Safer Roads Campaign 2015 today. This marked the third year that DirectAsia.com is sponsoring the campaign in support of the Safer Roads Singapore action plan â€“ to foster a culture of safe and courteous road use in Singapore. The event was graced by Mr Amrin Amin, Parliamentary Secretary, Ministry of Home Affairs.