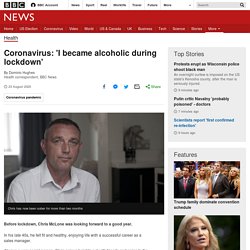 In his late 40s, he felt fit and healthy, enjoying life with a successful career as a sales manager. Always a very social person, Chris enjoyed nights out with friends and going to the football. Alcohol played a part in his life but he never viewed it as a problem. But within weeks of lockdown, Chris, who lives on Teesside, had gone from being someone who enjoyed a drink to someone who needed a drink.

"I suppose I've always been a social drinker - I was never within the limits, the recommended limits, and so yeah, I used to enjoy a drink, sometimes a little bit more than I should, as a lot of people do. Ultra-Orthodox and trans: 'I prayed to God to make me a girl' When Abby Stein came out as trans, she sent shock waves through the ultra-Orthodox Hasidic community. 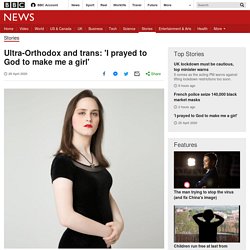 A direct descendant of Hasidic Judaism's founder, The Baal Shem Tov, Abby's parents considered her their first-born son and a future rabbi - but she was adamant that she was a girl. WeWork ex-boss had 'penchant to smoke marijuana' Image copyright Getty Images A former WeWork manager has filed a "charge of discrimination" against the firm and its co-founder Adam Neumann. 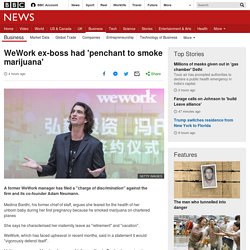 Medina Bardhi, his former chief of staff, argues she feared for the health of her unborn baby during her first pregnancy because he smoked marijuana on chartered planes She says he characterised her maternity leave as "retirement" and "vacation". WeWork, which has faced upheaval in recent months, said in a statement it would "vigorously defend itself". Mr Neumann agreed to step down as chief executive in September saying it was in the firm's "best interests" as the office space company raced to find fresh financing.

Ms Bardhi's complaint was made to the US Equal Employment Opportunity Commission on behalf of herself and "a class of similarly situated female WeWork employees". Ms Bardhi, who joined WeWork in 2014, said she had lost her position and responsibilities to a male colleague during her second maternity leave. The company has rejected the claim. Ex-Pope Benedict XVI blames 1960s revolution for sex abuse. Image copyright Getty Images Retired Pope Benedict XVI has published a letter which blames clerical sex abuse on the "all-out sexual freedom" of the 1960s. 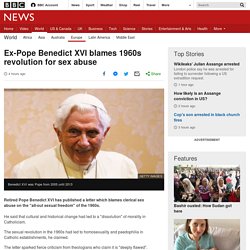 He said that cultural and historical change had led to a "dissolution" of morality in Catholicism. The sexual revolution in the 1960s had led to homosexuality and paedophilia in Catholic establishments, he claimed. The letter sparked fierce criticism from theologians who claim it is "deeply flawed". Vatican expert Joshua McElwee said in the National Catholic Reporter: "It does not address structural issues that abetted abuse cover-up, or Benedict's own contested 24-year role as head of the Vatican's powerful doctrinal office. " Some allegations of child sex abuse by priests that have emerged date back to decades before the 1960s, the decade that Pope Benedict claims sparked the abuse crisis.

'I ignored my children to play video games' Image copyright Getty Images "If I wasn't gaming, I was thinking about gaming". 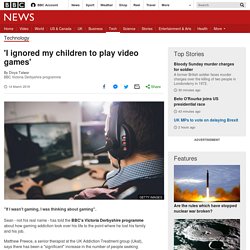 Sean - not his real name - has told the BBC's Victoria Derbyshire programme about how gaming addiction took over his life to the point where he lost his family and his job. Matthew Preece, a senior therapist at the UK Addiction Treatment group (Ukat), says there has been a "significant" increase in the number of people seeking treatment. The group, which has traditionally treated people for alcohol, drug and gambling problems, says that it has seen the number of people wanting help with gaming addiction rise year-on-year from four in 2014 to 22 in 2018. Illinois man allegedly kills 4-year-old girl after she spilled juice on Xbox. Johnathan Fair, 19, allegedly beat his girlfriend's 4-year-old daughter to death in December after she spilled juice on an Xbox video game console. 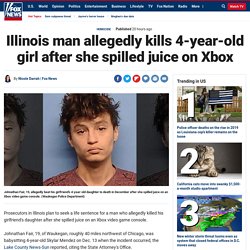 (Waukegan Police Department) Prosecutors in Illinois plan to seek a life sentence for a man who allegedly killed his girlfriend's daughter after she spilled juice on an Xbox video game console. Johnathan Fair, 19, of Waukegan, roughly 40 miles northwest of Chicago, was babysitting 4-year-old Skylar Mendez on Dec. 13 when the incident occurred, the Lake County News-Sun reported, citing the State Attorney's Office. Fair took the child to a hospital and claimed she fell and hit her head, prosecutors said. He later reportedly admitted that he shook Mendez "really hard" and beat her because she spilled juice on the console. Fair allegedly kicked Skylar down a hallway as part of her punishment. Doctors tried unsuccessfully to relieve the swelling in Mendez's brain and she died days later.

The Associated Press contributed to this report. Indian national jailed over sex assault on US flight. Image copyright Wayne County Sheriff's Office A US court has sentenced an Indian man to nine years in jail for sexually assaulting a woman who sat next to him on a US flight in January. 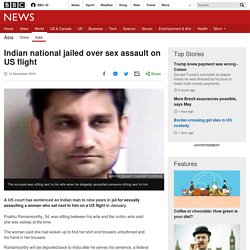 Prabhu Ramamoorthy, 34, was sitting between his wife and the victim, who said she was asleep at the time. The woman said she had woken up to find her shirt and trousers unbuttoned and his hand in her trousers. Ramamoorthy will be deported back to India after he serves his sentence, a federal court in Detroit said. The prosecution had originally sought an 11-year jail term. When the accusations against Ramamoorthy surfaced, he had denied them, telling police he could not have committed the crime because he was also asleep. Two nuns admit embezzling cash for Vegas gambling trips.

Image copyright Getty Images Two nuns who worked at a Catholic school in California have admitted embezzling about $500,000 (£396,000) and using it to gamble in Las Vegas. 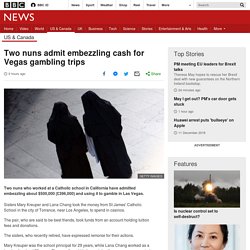 Sisters Mary Kreuper and Lana Chang took the money from St James' Catholic School in the city of Torrance, near Los Angeles, to spend in casinos. The pair, who are said to be best friends, took funds from an account holding tuition fees and donations. The sisters, who recently retired, have expressed remorse for their actions. Mary Kreuper was the school principal for 29 years, while Lana Chang worked as a teacher for about 20 years. Pope warns nuns to use 'sobriety' on social media On Monday, St James' Catholic Church said the nuns had expressed "deep remorse" over their actions, adding that while the police had been informed, no criminal charges would be brought against the pair.

The Archdiocese of Los Angeles said the church discovered that the money was missing during a routine audit.