All the TOK. From light bulbs to coffee cups: How the objects we create shape us. When Ainissa Ramirez walked into a glass blowing class, it was meant to be for a bit of fun — a break from her daily work as a material scientist. 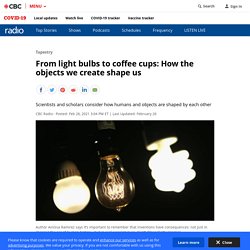 Instead, the experience led to a eureka moment. As she plunged her tool into the dangerously hot glass, Ramirez said she suddenly realized that she was in a two-way relationship with the material: she was using her artistic instincts to give it shape, but the glass had the power to potentially harm her. "I came to the class in a bad mood and I left in a great mood — in fact, happy to be alive because I survived what could have been a very, very bad accident. And that made me think 'I wonder how materials and humans have been shaping each other,'" Ramirez told Tapestry host, Mary Hynes. Ramirez explores that idea in her book The Alchemy of Us: How Humans and Matter Transformed One Another.

Our relationship with the night sky helps illustrate the point. "We used to feel smaller because we thought we were part of something much bigger. Fears for Polish Holocaust research as historians ordered to apologise. A court has ordered two prominent historians to apologise to an elderly woman who claimed they had defamed her late uncle over his wartime actions, in a case seen as critical to independent Holocaust research in Poland. 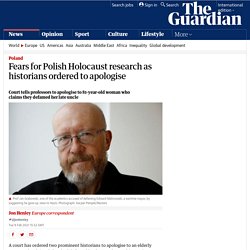 Prof Jan Grabowski of the University of Ottawa and Prof Barbara Engelking of the Polish Center for Holocaust Research were accused of defaming Edward Malinowski by suggesting in a book that he gave up Jews to Nazi Germans. In a civil case condemned by Jewish organisations and historians as an attack on free academic inquiry, the researchers were told to apologise for a passage in Night Without End: The Fate of Jews in Selected Counties of Occupied Poland, a 1,600-page work they co-edited, which the court said “violated Malinowski’s honour” by “providing inaccurate information”. Research shows thousands of Poles risked their lives to help Jews, but thousands also participated in the Holocaust. Translating the Untranslatable: The Impossible Art of Subtitling “Taco Chronicles” Subtitle translation is a fascinating, complicated, and often overlooked part of the filmmaking process. 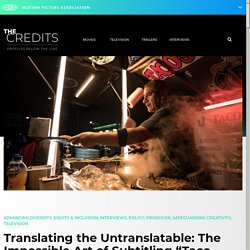 It’s a delicate dance of literal translation and cultural interpretation, all the while practicing a serious economy of words. Most subtitles are capped at only forty-four characters (less than this sentence). Plus, the eye reads much slower than the ear hears. My own up-close experience with the art form came with Netflix’s Taco Chronicles (Las Crónicas del Taco), which I produced along with my colleagues Pablo Cruz, Arturo Sampson, Carlos Pérez Osorio, and Isabel López Polanco. While our Mexico City-based team was bilingual, I was the American and native English speaker amongst the group, so it fell to me to do the final review of each episode’s subtitles. Why? The format of our series very much relies upon distinct regional cultures.

In a recent phone interview, I asked her about the biggest challenge she faced on our project. But Benjamin is a long-gone philosopher. The Language Nerds. The strange idea that we are not in control of our minds - BBC Reel. Knowledge and Technology Questions. Viral video of ballerina with Alzheimer's shows vital role of music in memory. We see a frail and elderly woman in a chair, her eyes downcast. 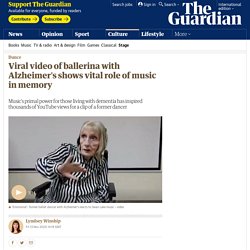 She motions for the music to be turned up, a swelling melody from Tchaikovsky’s Swan Lake, and with a little encouragement her hands begin to flutter. Then suddenly her eyes flash and she’s Odette the swan queen at the misty lakeside, arms raised. She leans forward, wrists crossed in classic swan pose; her chin lifts as if she’s commanding the stage once more, her face lost in reverie.

The woman in the film is Marta Cinta González Saldaña, a former ballet dancer who died in 2019, the year the video was shot. But the clip has gone viral since being posted recently by Spanish organisation Música Para Despertar (Music to Awaken), which promotes the value of music for those living with Alzheimer’s.