Will coronavirus reverse globalisation? Image copyright Getty Images Globalisation has been one of the buzzwords of the past 25 years. 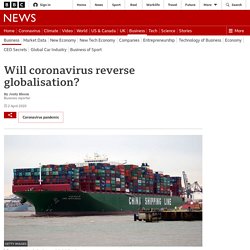 It may seem a rather strange concept, since any economic historian will tell you that people have been trading across vast distances for centuries, if not millennia. You only have to look at the medieval spice trade, or the East India Company, to know that. But globalisation is really about the scale and speed of international business, which has exploded in the past few decades to unprecedented levels. Easier travel, the world wide web, the end of the Cold War, trade deals, and new, rapidly developing economies, have all combined to create a system that is much more dependent now on what is happening on the other side of the world than it ever was. Which is why the spread of coronavirus, or Covid-19 to be specific, has had such an immediate economic effect. "When we look back at 2003, at the Sars epidemic, China accounted for 4% of global output," she says.

Digital isolation: The vulnerable people left behind. Image copyright Getty Images Whether it's banking, food delivery or a local taxi company, finding out your favourite services are available online is normally a happy moment - it's often faster and more convenient. 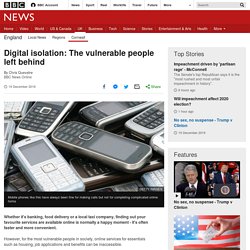 However, for the most vulnerable people in society, online services for essentials such as housing, job applications and benefits can be inaccessible. Harvey is only 16, but is living in supported housing in Redruth, Cornwall, after experiencing a breakdown in communication with his family. "I live in a shared house. Is there a growing far-right threat online? Facebook bans UK far right groups and leaders. Image copyright Getty Images Facebook has imposed a ban on a dozen far-right individuals and organisations that it says "spread hate". 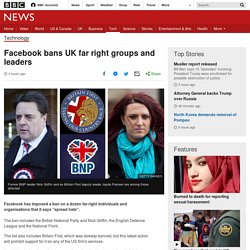 The ban includes the British National Party and Nick Griffin, the English Defence League and the National Front. Prince William criticises social media firms. Image copyright Getty Images The Duke of Cambridge has accused social media firms of being "on the back foot" when dealing with fake news, privacy issues and cyber-bullying. 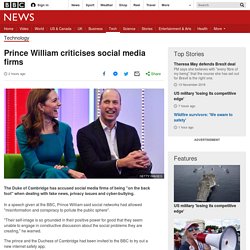 In a speech given at the BBC, Prince William said social networks had allowed "misinformation and conspiracy to pollute the public sphere". "Their self-image is so grounded in their positive power for good that they seem unable to engage in constructive discussion about the social problems they are creating," he warned. The prince and the Duchess of Cambridge had been invited to the BBC to try out a new internet safety app. During their visit, the royal couple met children and their parents who had helped design it. These teens secretly trolled themselves online - BBC Three. Facebook details scale of abuse on its site. Media playback is unsupported on your device Facebook says it deleted or added warnings to about 29 million posts that broke its rules on hate speech, graphic violence, terrorism and sex, over the first three months of the year. 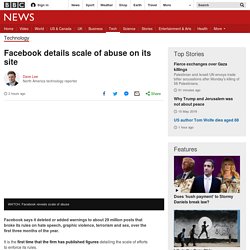 It is the first time that the firm has published figures detailing the scale of efforts to enforce its rules. Facebook is developing artificial intelligence tools to support the work of its 17,000 human moderators. But the report suggest the software struggles to spot some types of abuse. For example, the algorithms only flagged 38% of identified hate speech posts over the period, meaning 62% were only addressed because users had reported them. 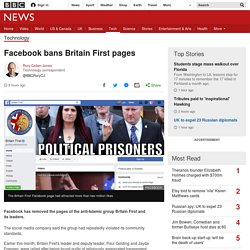 The social media company said the group had repeatedly violated its community standards. Earlier this month, Britain First's leader and deputy leader, Paul Golding and Jayda Fransen, were jailed after being found guilty of religiously aggravated harassment. More than two million people had liked the group's Facebook page. The pages of Paul Golding and Jayda Fransen also had large followings. Facebook says the decision to remove the pages was made after Britain First had ignored a final warning about the posting of material that broke its community standards. Justice for Sreejith: Indian protester becomes social media hero. 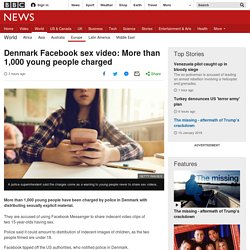 They are accused of using Facebook Messenger to share indecent video clips of two 15-year-olds having sex. Police said it could amount to distribution of indecent images of children, as the two people filmed are under 18. Facebook tipped off the US authorities, who notified police in Denmark. One thousand and four young people from across the country are facing charges after allegedly circulating the material via the messaging app in autumn last year. Schools 'should help children with social media risk' Media playback is unsupported on your device Schools should play a bigger role in preparing children for social media's emotional demands as they move from primary to secondary school, England's children's commissioner says. 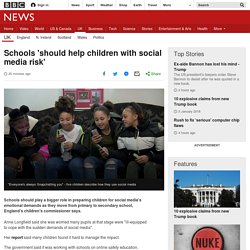 Anne Longfield said she was worried many pupils at that stage were "ill-equipped to cope with the sudden demands of social media". Her report said many children found it hard to manage the impact. The government said it was working with schools on online safety education. I lost my job over a Facebook post - was that fair? When Rachel Burns posted a photo of a singalong at work on her Facebook page, she had no idea that her actions would end her career. 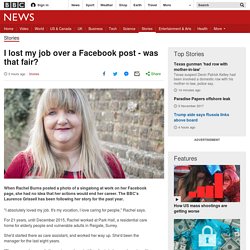 The BBC's Laurence Grissell has been following her story for the past year. "I absolutely loved my job. It's my vocation, I love caring for people," Rachel says. For 21 years, until December 2015, Rachel worked at Park Hall, a residential care home for elderly people and vulnerable adults in Reigate, Surrey. Social media giants have 'moral duty' to tackle child abuse. The robot lawyers are here - and they’re winning. Image copyright Getty Images. 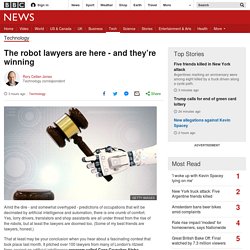 Instagram baby photo thief banned from social media. Image copyright PA A woman who stole photos of babies from Instagram and claimed they were sick or dead in a bid to get money has been banned from social media. Kati Ringer, 21, claimed the pictures, copied from accounts belonging to two unsuspecting mums, were her own. Miss Turkey stripped of her crown over coup tweet. Image copyright Getty Images The winner of Miss Turkey 2017 has been stripped of her crown after one of her past tweets came to light.

Itir Esen, 18, had shared a post referencing last year's coup attempt, comparing her menstrual cycle to the spilt blood of "martyrs". The competition's organisers said the tweet was "unacceptable" and confirmed their decision to dismiss her, just hours after she won. Ms Esen has since said, via Instagram, that she was not being political. The tweet was posted around the first anniversary of the 15 July coup attempt, when nearly 250 people died fighting an army uprising. She wrote: "I am having my period this morning to celebrate the July 15 martyrs' day.

Hate speech, terror recruitment videos and sexual images of children all took too long to be removed, said the Home Affairs Select Committee report. It called for a review of UK laws and stronger enforcement around illegal material. And the government should consider making the sites pay to help police what people post, it said. The cross-party committee took evidence from Facebook, Twitter and Google, the parent company of YouTube, for its report. Viewpoint: Is inequality about to get unimaginably worse? Image copyright Getty Images. Warning over fake celebrity accounts targeting children. Image copyright Getty Images. Spear-phishing scammer demanded sex show. Image copyright Getty Images. A guided tour of the cybercrime underground. How smartphones became ‘eyes’ for blind people.

Italy's Tiziana: Tragedy of a woman destroyed by viral sex videos. It probably took no more than a few seconds for Tiziana Cantone to begin the sequence of events that led to her suicide. In April 2015, the 31-year-old from Mugnano, on the outskirts of Naples, sent a series of sex videos to five people via WhatsApp. The recipients included her boyfriend Sergio Di Palo, with whom she had an unstable relationship. I'm 26 years old and want nothing to do with social media - BBC Three. Facebook lurking makes you miserable, says study. Image copyright iStock. Orlando shooting relatives sue social media giants. Image copyright Daniel Munoz/Getty The families of three men who were killed in the Orlando nightclub massacre have filed a lawsuit against Facebook, Twitter and Google (YouTube) alleging that the firms provided "material support" to the so-called Islamic State.

100 Women 2016: How women are winning online. Image copyright Change.org Women are more likely to be successful with online campaigns than men, according to one international petition site. Change.org has found that although men start more petitions, women 'win' their campaigns 14% more often than men do. How innocent photos of children have been exploited on Twitter. Image copyright iStock. Facebook fake news: Zuckerberg details plans to combat problem. Image copyright Reuters Facebook founder Mark Zuckerberg has outlined plans for how he hopes to combat fake news on the site. Facebook became mired in controversy after some users complained fake news changed the outcome of the US election. Facebook fake news row: Mark Zuckerberg is a politician now. Children see 'worrying' amount of hate speech online.

BBC World Service announces biggest expansion 'since the 1940s' The rise and rise of fake news. Five pictures that show how social media can be a minefield. Sex, honour, shame and blackmail in an online world. Future - Does globalization mean we will become one culture? Broadband must be affordable for poor, say councils. BBC iWonder - Should we try to regulate the internet?

Yahoo 'secretly scanned emails for US authorities' If Pokémon Go feels like a religion, that's because it kind of is. Pokemon Go: All you need to know.