The Writing Process. By Ali Hale Whether you know it or not, there’s a process to writing – which many writers follow naturally. 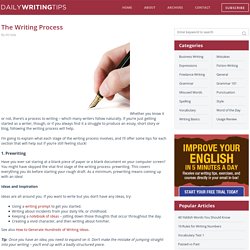 If you’re just getting started as a writer, though, or if you always find it a struggle to produce an essay, short story or blog, following the writing process will help. I’m going to explain what each stage of the writing process involves, and I’ll offer some tips for each section that will help out if you’re still feeling stuck! 1. Prewriting Have you ever sat staring at a blank piece of paper or a blank document on your computer screen? Ideas and Inspiration Ideas are all around you. Using a writing prompt to get you started. See also How to Generate Hundreds of Writing Ideas.

Tip: Once you have an idea, you need to expand on it. Building on Your Idea These are a couple of popular methods you can use to add flesh to the bones of your idea: Free writing: Open a new document or start a new page, and write everything that comes into your head about your chosen topic. 2. 3. Adding Removing. Back to Basics: Perfect Your Note-Taking Techniques. Writing Strategies. My typification of composing strategies is based on an extensive review of the published self- reports of writers. 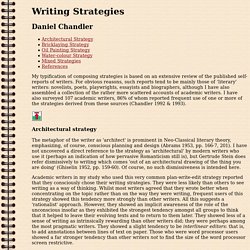 For obvious reasons, such reports tend to be mainly those of ‘literary' writers: novelists, poets, playwrights, essayists and biographers, although I have also assembled a collection of the rather more scattered accounts of academic writers. I have also surveyed 107 academic writers, 86% of whom reported frequent use of one or more of the strategies derived from these sources (Chandler 1992 & 1993).

Architectural strategy The metaphor of the writer as 'architect' is prominent in Neo-Classical literary theory, emphasizing, of course, conscious planning and design (Abrams 1953, pp. 166-7, 201). Academic writers in my study who used this very common plan-write-edit strategy reported that they consciously chose their writing strategies. Bricklaying strategy I encountered examples of the metaphor of bricklaying in my review of writers' accounts of their composing styles.

Writing and speaking come from different parts of the brain, study shows. Written and spoken language can exist separately in the brain, a new study from Johns Hopkins shows. 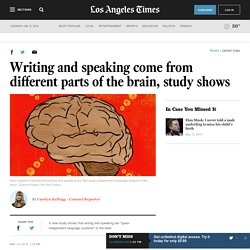 The study looked at stroke victims with aphasia that impaired their communication capabilities in one way but not the other. Researchers at Johns Hopkins, Rice and Columbia universities studied five stroke patients with aphasia, difficulty communicating after their strokes. Four could speak but not write sentences that took a certain form -- the study focused on affixes, such as the "-ing" in "jumping" -- while the last could write those sentences but not speak them. "Actually seeing people say one thing and -- at the same time -- write another is startling and surprising," Johns Hopkins cognitive science professor Brenda Rapp told the website Futurity. "We don’t expect that we would produce different words in speech and writing. The study, titled "Modality and Morphology: What We Write May Not Be What We Say," was published in the journal Psychological Science.

The Psychology of Writing and the Cognitive Science of the Perfect Daily Routine.

Related:  Self Actualisation   -  Back to Basics: Perfect Your Note-Taking Techniques   -  Education   -  Enterprise