National Geographic Society. The Great Pacific Garbage Patch is a collection of marine debris in the North Pacific Ocean.

These areas of spinning debris are linked together by the North Pacific Subtropical Convergence Zone, located a few hundred kilometers north of Hawaii. What is Water Pollution for children. What is water pollution? 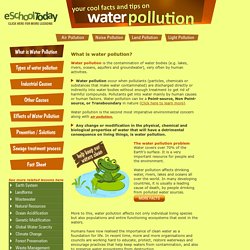 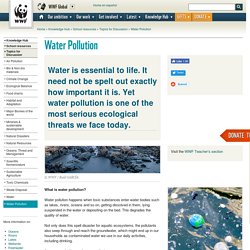 Water pollution happens when toxic substances enter water bodies such as lakes, rivers, oceans and so on, getting dissolved in them, lying suspended in the water or depositing on the bed. Repeat-offender-must-be-named-and-shamed-for-dandenong-creek-dump-20180520-p4zgga. The 5 Most Polluted Seas in the World. NOTE FROM SWEET GREENS: This article wasn’t written by me. 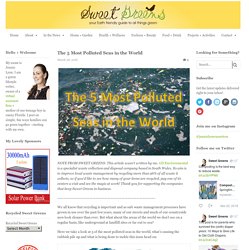 GD Environmental is a specialist waste collection and disposal company based in South Wales. Its aim is to improve local waste management by recycling more than 96% of all waste it collects, so if you’d like to see how many of your items are recycled, pay one of its centers a visit and see the magic at work! Thank you for supporting the companies that keep Sweet Greens in business. We all know that recycling is important and as safe waste management processes have grown in use over the past few years, many of our streets and much of our countryside now look cleaner than ever. But what about the areas of the world we don’t see on a regular basis, like underground at landfill sites or far out to sea?

5 Most Polluted Lakes in the World. Biodiversity and the environment in the world. 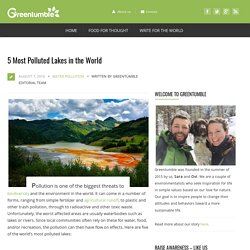 It can come in a number of forms, ranging from simple fertilizer and agricultural runoff, to plastic and other trash pollution, through to radioactive and other toxic waste. Unfortunately, the worst affected areas are usually waterbodies such as lakes or rivers. The Age-Birds are dropping dead off Australia's coast (May 19, 2018) Amazon River and Flooded Forests. The Amazon is the second longest river in the world (after the Nile), stretching 6,400 kilometers and containing 20 percent of the Earth's fresh water. 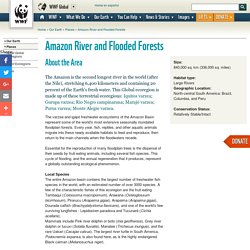 This Global ecoregion is made up of these terrestrial ecoregions: Iquitos varzea; Gurupa varzea; Rio Negro campinarana; Marajó varzea; Purus varzea; Monte Alegre varzea. The varzea and igapó freshwater ecosystems of the Amazon Basin represent some of the world's most extensive seasonally inundated floodplain forests. Every year, fish, reptiles, and other aquatic animals migrate into these newly available habitats to feed and reproduce, then return to the main channels when the floodwaters recede. Essential for the reproduction of many floodplain trees is the dispersal of their seeds by fruit-eating animals, including several fish species.

This cycle of flooding, and the annual regeneration that it produces, represent a globally outstanding ecological phenomenon. Resources NationalGeographic.com. 'Mountains and mountains of plastic': life on Cambodia's polluted coast. Looking down into the water that lies beneath the ramshackle houses of Sihanouk, Cambodia, it is hard to imagine that the sea is there at all. 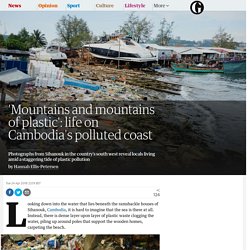 Instead, there is dense layer upon layer of plastic waste clogging the water, piling up around poles that support the wooden homes, carpeting the beach. Floating rubbish in Sihanouk, Cambodia New images of from Sihanouk, in the country’s south west, depict in horrifying detail the extent of Cambodia’s growing problem of plastic pollution and how the tide of unbiodegradable rubbish has become part of the fabric of the lives of communities living in poverty. A woman sweeps her restaurant shopfront “There seems to be no empathy for the fact that for the people living in Sihanouk, there isn’t a water filtration system,” said Peren. Over the past 15 to 20 years, Cambodia’s water system has improved faster than most of its regional neighbours, though sanitation efforts have mainly been centred in the capital Phnom Penh.

Impact of Pollution in the Rainforest. Forests around the world are affected by air and water pollution, produced from industrial and commercial activities. 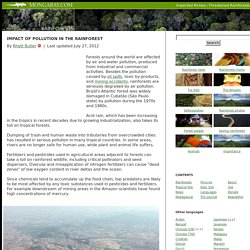 Besides the pollution caused by oil spills, toxic by-products, and mining accidents, rainforests are seriously degraded by air pollution. Brazil's Atlantic forest was widely damaged in Cubatão (São Paulo state) by pollution during the 1970s and 1980s. Acid rain, which has been increasing in the tropics in recent decades due to growing industrialization, also takes its toll on tropical forests. Dumping of trash and human waste into tributaries from overcrowded cities has resulted in serious pollution in many tropical countries. In some areas, rivers are no longer safe for human use, while plant and animal life suffers. Fertilizers and pesticides used in agricultural areas adjacent to forests can take a toll on rainforest wildlife, including critical pollinators and seed dispersers. Air pollution above São Paulo, Brazil. Continued / Next: Urbanization Lovejoy, T. Effects of Water Pollution. Water pollution has been documented as a contributor to a wide range of health problems and disorders in humans. 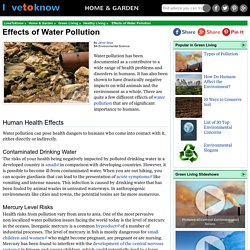 It has also been shown to have drastically negative impacts on wild animals and the environment as a whole. There are quite a few different effects of water pollution that are of significant importance to humans. Human Health Effects Water pollution can pose health dangers to humans who come into contact with it, either directly or indirectly. Contaminated Drinking Water. (Mississippi River) Endangered species protection sought for lake sturgeon. The Center for Biological Diversity has petitioned for federal protection for lake sturgeon, an ancient fish species in the Great Lakes and the Mississippi River drainage that has declined by roughly 99 percent over the past century or so. 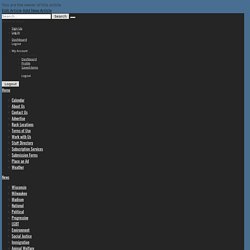 Lake sturgeon can live for more than 100 years and grow longer than 8 feet. Chemicals in Melbourne's Yarra River created a health risk, says report. A toxic cocktail of chemicals and herbicides has been washed into Melbourne’s Yarra River, killing trees and creating a public health risk, according to a Parks Victoria report. An internal incident and hazard summary report on Parks Victoria operations between January and October 2015 has revealed toxic chemicals were flowing into the Yarra from a wash-down facility in the Warrandyte state park, located next to popular swimming spot Pound Bend.

The report said the “wash-down facility used to pressure wash vehicles, to triple rinse chemical containers and to mix/fill herbicides for use in the park” did not meet “any legal requirements” and would face “serious fines if the EPA [Environment Protection Authority] was informed”. Snowy River. Snowy River The iconic Snowy River has been immortalised through Australian folk lore and film – the poem Man from Snowy River captured our imagination in 1890, and up until the mid 20th century the Snowy remained notable for its rapids, large reach and high volume of fresh water.

However, the damming of the Snowy at Jindabyne in 1967 for electricity generation as part of the Snowy Mountains Hydro Electric Scheme spelled an insidious decline: with reduced flows and fewer floodings, the river channel is being choked by sands and sediments;willow trees and other weeds are suffocating the remaining water flow;pest fish species increase while native fish populations decline - the native Bass stopped breeding in the late 1980s leaving this species in danger of dying out.

During the 2010 floods, Snowy Hydro continued to 'divert' water westwards putting more water into the already flooded Murrumbidgee and Murray River systems. Other Gippsland Rivers. Freshwater Conservation. Within about 10 years most people on the planet will face life with water shortages. Half the world’s major rivers are being seriously polluted and/or depleted. About 40 percent of rivers and lakes in the U.S. surveyed by the EPA are too polluted for swimming or fishing.

Why Is this Happening? Too often we pit one need against another as we use rivers and lakes to meet our needs. We grow food in ways that send pollution into our drinking water. We can and must make better choices or we will continue to spoil the very resources we need and cherish. Water scarcity - Science (6,7)