Global risks in the face of social, environmental and technological change. Global risks related to key social, environmental and technological trends are creating an interconnected web that continues to sow considerable uncertainty for humanity going forward. Five Trends Influencing the Future of Our Cities. When the U.S. Environmental Protection Agency removed its climate change hub from public view earlier this year, 17 cities had a response: Each posted the information on city government sites. 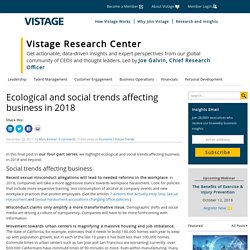 Social trends affecting business Recent sexual misconduct allegations will lead to needed reforms in the workplace. In 2018, companies will take a more aggressive stance towards workplace harassment. Look for policies that include more expansive training, less consumption of alcohol at company events and new workplace practices that protect employees. (See the articles 7 Actions that Actually Help Stop Sexual Harassment and Sexual harassment accusations changing office policies.) Environmental Trends for 2018 - What's coming up? We reached out to our followers on social media as well as our ECO Research Community to learn about their predictions for environmental trends in 2018. 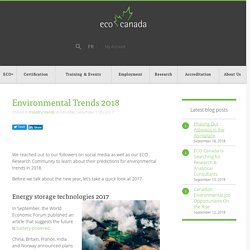 Before we talk about the new year, let’s take a quick look at 2017. Energy storage technologies 2017. Five key sustainability trends for 2018. 7 key trends all sustainability execs should watch. It is 2018, and it arguably never has been a more difficult, unpredictable, yet exciting time to run an international business. No doubt overcoming the Great Depression ahead of the outbreak of World War II in the 1930s was more than a little trying, of course. But fast forward 80 to 90 years and the global economy is an ever more complex and fast-evolving place, exposed to a widening variety of risks and shocks — a fact only underlined by last week's stock market volatility. Holiday season means risk of tropical diseases in Europe. Warmer weather and summer travel put tropical mosquito-borne diseases on the European health authorities’ radar. 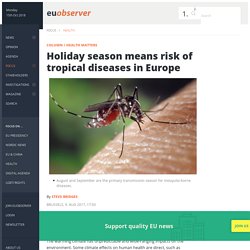 The warming climate has unpredictable and wide-ranging impacts on the environment. Some climate effects on human health are direct, such as extreme weather and rising sea levels that threaten low-lying areas. Other climate change effects on health are no less unpredictable but more indirect. We desperately need to store more carbon – seagrass could be the answer.

According to the UN’s Intergovernmental Panel on Climate Change, urgent and unprecedented changes are needed to avoid a climate change catastrophe. 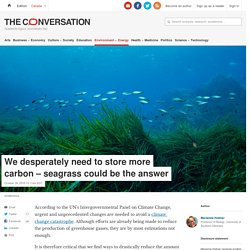 Although efforts are already being made to reduce the production of greenhouse gasses, they are by most estimations not enough. It is therefore critical that we find ways to drastically reduce the amount of pollutants in the atmosphere. Ecosystems capable of absorbing and storing large amounts of carbon dioxide know as “carbon sinks” are ideal for this. In principle, all living organisms – all animals, plants, algae and bacteria – consist of carbon and so function as a carbon sink. Europe’s renewable energy strategy will destroy forests and harm climate, scientists warn. Leading climate scientists have denounced the EU’s decision to push wood as a “renewable” energy source. 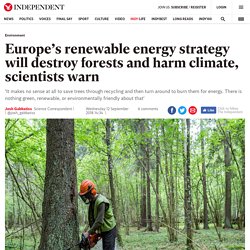 They say the move will likely result in both a boost in greenhouse gas emissions across Europe and devastation of some of the world’s most ancient forests. Not only are forests home to much of the planet’s biodiversity, they absorb climate-damaging CO2 from the atmosphere and are therefore considered a vital buffer against climate change. Despite this, earlier this summer European officials decided – against the advice of hundreds of scientists – that wood could be considered a low-carbon fuel, meaning that trees can be cut down directly to burn. Fracking is one of the least sustainable ways to produce electricity, says new study. Shale gas ranks among the least sustainable sources of electricity, according to research from a team of Manchester scientists. 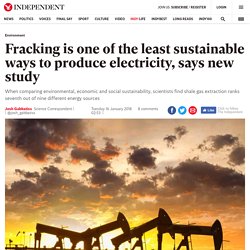 Hydraulic fracturing, or “fracking” to extract shale gas is a controversial technique that has been opposed by many environmental campaigners and local residents in proposed fracking areas. Despite being banned by the Scottish government, fracking projects are currently being rolled out in other parts of the UK. To determine the potential of shale gas extraction in the UK, the Government has stated it is “encouraging safe and environmentally sound exploration”.

Asthma deaths rise 25% amid growing air pollution crisis. Even short international travel can spread colistin-resistant bacteria: Researchers find short trips to a developing country can increase the appearance of a resistance gene to the antibiotic colistin. The emergence of antibiotic resistance among dangerous pathogens is increasingly problematic worldwide. 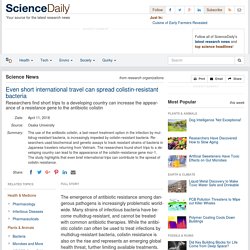 Many strains of infectious bacteria have become multidrug-resistant, and cannot be treated with common antibiotic therapies. While the antibiotic colistin can often be used to treat infections by multidrug-resistant bacteria, colistin resistance is also on the rise and represents an emerging global health threat, further limiting available treatments. Now, in a study published in Infection and Drug Resistance, researchers at Osaka University followed Japanese travelers to find out how short trips to a developing country can lead to the spread of colistin resistance. Environmental Risk Factors for Developing Type 2 Diabetes Mellitus: A Systematic Review. What is the environmental impact of Europe's warmer-than-ever seas?

Sizzling temperatures in northern Europe will likely see more people flock to enjoy a dip in the warmer-than-normal water in the coming days. 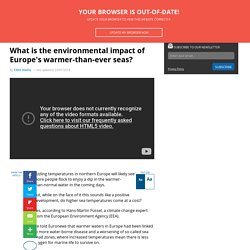 But, while on the face of it this sounds like a positive development, do higher sea temperatures come at a cost? The environmental costs of fast fashion. It’s tough to love our clothes and keep wearing them for longer when we are faced with a tempting array of newness on offer in the shops. 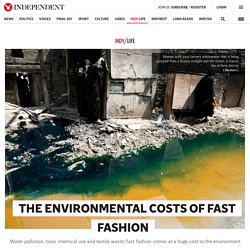 But before you head out into the January sales for those irresistible deals, spare a thought for the impact of fast fashion on the environment. Fast fashion focuses on speed and low costs in order to deliver frequent new collections inspired by catwalk looks or celebrity styles. But it is particularly bad for the environment, as pressure to reduce cost and the time it takes to get a product from design to shop floor means that environmental corners are more likely to be cut. Criticisms of fast fashion include its negative environmental impact, water pollution, the use of toxic chemicals and increasing levels of textile waste. 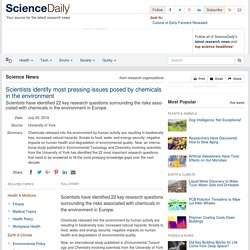 Chemicals released into the environment by human activity are resulting in biodiversity loss; increased natural hazards; threats to food, water and energy security; negative impacts on human health and degradation of environmental quality. Now, an international study published in Environmental Toxicology and Chemistry involving scientists from the University of York has identified the 22 most important research questions that need to be answered to fill the most pressing knowledge gaps over the next decade. Sun cream sheds titanium dioxide in the sea, French study suggests. Swimmers' sun creams deposit titanium dioxide nanoparticles into the sea, where their protective coatings may be washed away, according to a French study. Mercury in the water: 40% of Europe’s lakes and rivers contaminated. Energy-Water Nexus: Head-On Collision or Near Miss? This Article From Issue. Truevaluefarm - TEEB. Integrated farm management: transforming sustainability in agriculture.

Yet they have fallen down the EU policy agenda even though tools exist to reverse that trend, according to a new report published on Wednesday (26 September). Policymakers cannot afford to ignore soil sustainability anymore, argues the report by the European Academies’ Science Advisory Council (EASAC), which represents the national science academies of the 28 EU countries, Norway, and Switzerland. The report, titled “Opportunities for soil sustainability in Europe”, explores the tools available to bring soil sustainability back on the European political agenda.