Walt Disney Animation Studios. How to Have an Enchanted Breakfast. Ver Pelicula El Extraño Mundo de Jack: Pesadilla antes de navidad: The Nightmare Before Christmas (1993) DVDrip Online: Descargar Peliculas Gratis DVDRip en 1 Link en linea Audio Latino. THE HAPPIEST BLOG ON EARTH. Inline_mjc342AacX1qb1gfx.jpg (JPEG Image, 500 × 188 pixels) Happily Ever After....<3. After Ever After - DISNEY Parody. Disneyland - The Largest Unofficial On-Line Guide to Disneyland California. Roger Rabbit's 20th MICHAEL BOWLING-Roger Rabbit's Car Toon Spin opened on January 26, 1994 and was the first dark ride built in Disneyland in over a decade It was also the first Disney attraction where the rider can turn the steering wheel of the ride vehicle to change direction. 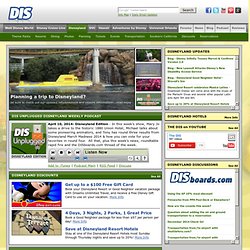 Continue Reading Mechanical Kingdoms MARY JO MELLADO WILLEY-The Disney Gallery recently opened its latest exhibit to the delight of steampunk fans. Steampunk is a style that incorporates steam-powered machinery with a futuristic Victorian setting. Residence Inn Anaheim Resort TOM BELL-This is part of a series of blogs and DIS Unplugged: Disneyland Edition podcast segments focusing on the off-property establishments. Staybridge Suites TOM BELL-This is another in a series of blogs and coordinating DIS Unplugged: Disneyland Edition podcast segments focusing on off-property establishments. Quality Inn & Suites At The Park. Certain as the sun rising in the east. The NEW and IMPROVED Animated Heroes Website! Animated Heroes . . . Basil of Baker Street. Basil of Baker Street The Great Mouse Detective Basil is the dauntless hero and title character in The Great Mouse Detective (1986). 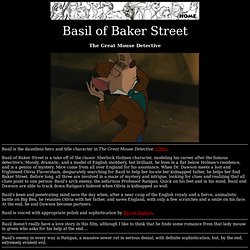 Basil of Baker Street is a take off of the classic Sherlock Holmes character, modeling his career after the famous detective's. Moody, dramatic, and a model of English snobbery, but brilliant, he lives in a flat below Holmes's residence, and is a genius of mystery. Mice come from all over England for his assistance. Basil's keen and penetrating mind save the day when, after a near coup of the English royaly and a fierce, animalistic battle on Big Ben, he reunites Olivia with her father, and saves England, with only a few scratches and a smile on his face.

Basil is voiced with appropriate polish and sophistication by Barrie Ingham. Basil doesn't really have a love story in this film, although I like to think that he finds some romance from that lady mouse in green who asks for his help at the end.... So what do I think? Basil's Thoughts Dr. Dr. Dr. Dr. 15 Reminders That You're Great Today. We think you’re great. 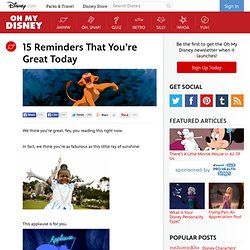 Yes, you reading this right now. In fact, we think you’re as fabulous as this little ray of sunshine: This applause is for you. You may not be the only one, but in our book you’re just as Tiggerific as this guy. Go to a window. You’re so bright, you’d take Ray’s attention away from the star. You’re doing such a great job that Jiminy Cricket would have no advice left to give.

You’re the one, the one who can break the spell. King Louie wants to be like you. The Magic Mirror was wrong: you’re the fairest of them all. The White Rabbit would never have been late for a date with you. Flynn Rider’s smolder has nothing on yours. “What’s this?! The whole forest is twitterpated over you. Disney Parks Blog - The official blog for Disneyland Resort, Walt Disney World and Disney Cruise Line. Anyone want $1 million? 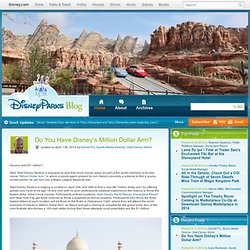 Well, Walt Disney Studios is prepared to give that much money away as part of the world premiere of its new movie “Million Dollar Arm,” in which a sports agent (played by Jon Hamm) concocts a scheme to find a young cricket pitcher he can turn into a Major League Baseball star. Walt Disney Studios is staging a contest on April 25th and 26th to find a real-life “million dollar arm” by offering guests (you have to be age 18 and over with no prior professional baseball experience) the chance to throw the fastest strike. Here’s how it works: Participants at three locations;­ Walt Disney World Resort, Disneyland Resort and New York City, get three chances to throw a baseball as fast as possible. Participants who throw the three fastest strikes at each location will be flown to the finals in Hollywood, Calif., where they will attend the world premiere of Disney’s “Million Dollar Arm” on May 6 and get a chance to compete for the grand prize.