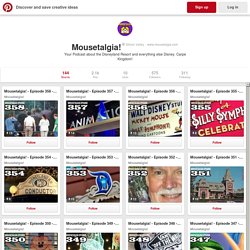 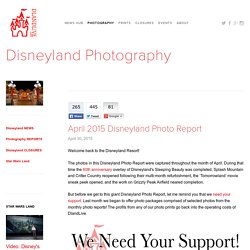 Brad Bird's ‘Tomorrowland’ took over the Magic Eye Theater, but it’s more than that. Outsidetheberm. Tiki room on Pinterest. Big Thunder Mountain lights up and Mark Twain sets sail into the night. Disneyland‘s off-season continues with winter refurbishments continuing in both theme parks. 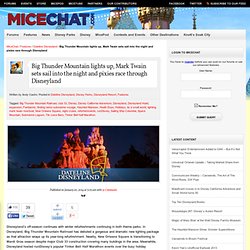 In Disneyland, Big Thunder Mountain Railroad has debuted a gorgeous and dramatic new lighting package as that attraction wraps up its year-long refurbishment. Nearby, New Orleans Square is transitioning to Mardi Gras season despite major Club 33 construction covering many buildings in the area. Meanwhile, Disneyland hosted runDisney‘s popular Tinker Bell Half Marathon events over the busy holiday weekend. Original Mickey Mouse Club Home. Untitled. Yesterday, April 5th, it was the Grand opening event of the Tower of terror at the Walt Disney Studios, and, although the day didn't began that well, due to a terrible windy and rainy weather, the evening was fantastic, with probably the best show i've seen so far for an opening of a new major Disney attraction. 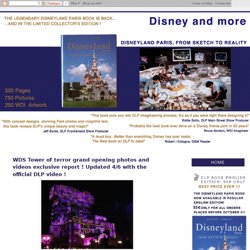 Thanks to 45 photos and 23 videos you will see everything of this grand opening event, just like if you were there! And i just updated the article with the official DLP video of the grand opening! At 3 pm, it was the Stitch live inauguration. It was a small show, with a dedication speech and Stitch getting out of a big box. The best was yet to come. At the exit of the TOT some young european stars did a photo call with Mickey... Disney Dad 23. Epic Walt Disney History part 2! Lost Disney studio and homes in Los Angeles!! 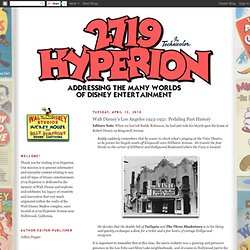 Buddy suddenly remembers that he wants to check what's playing at the Vista Theatre, so he points his bicycle south off Kingswell onto Hillhurst Avenue. He travels the four blocks to the corner of Hillhurst and Hollywood Boulevard where the Vista is located. He decides that the double bill of Tailspin and The Three Musketeers is to his liking and quickly exchanges a dime for a ticket and a few hours of vintage Hollywood escapism. It is important to remember that at this time, the movie industry was a growing and pervasive presence in the Los Feliz and Silver Lake neighborhoods, and of course in Hollywood just to the west. Data from the 1930 U.S. Across the street from the Vista Theatre was one of Hollywood's then well known poverty row studios. Walt and Lillian Disney lived for a brief time very near to this location.

Disneyland's World Famous Dr. Lee! Mickeycity.com. Remembering Annette Funicello at Disneyland Park. As you may know, Annette Funicello was discovered by Walt Disney himself while attending an amateur program at the Starlight Bowl in Burbank when she was just 13 years old. 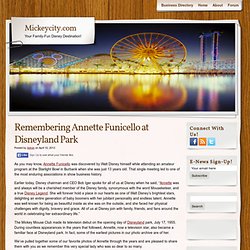 That single meeting led to one of the most enduring associations in show business history. Earlier today, Disney chairman and CEO Bob Iger spoke for all of us at Disney when he said, “Annette was and always will be a cherished member of the Disney family, synonymous with the word Mouseketeer, and a true Disney Legend. She will forever hold a place in our hearts as one of Walt Disney’s brightest stars, delighting an entire generation of baby boomers with her jubilant personality and endless talent. Disney Dose- A Disneyland Blog and Everything Else Mousetacular. Stuff from the park.

Daveland Vintage and Current Disneyland Photo Index. BACKSTORY: Disneyland is one of my favorite places to visit. 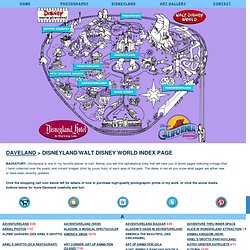 Below, you will find alphabetical links that will take you to photo pages featuring vintage (that I have collected over the years) and current images (shot by yours truly) of each area of the park. The dates in red let you know what pages are either new or have been recently updated. Click the shopping cart icon below left for details of how to purchase high-quality photographic prints of my work, or click the social media buttons below for more Daveland creativity and fun!

Take a trip back in time to Disneyland almost 50 years ago and pose just like the guests in the vintage shot on the right—and it’s so simple! >>Use the convenient drop-down Paypal menu below to pick between traditional Black & White or glowing Color 5x7 and whether you want 1-, 2-, 3-, or 4- prints (the more you buy, the more you save!). >>Email me up to 4 photos of the people you’d like to see in the Matterhorn cutout and the date you’d like on the sign. Pinterest. Top Sites about Disney. The history and heritage of DisneylandWalt's Apartment. Fan website on the Disneyland and Walt Disney World theme parks. Disneyland Resort. MiceAge. Dedicated to Disneyland Paris Welcomes Spring April 15, 2014 at 1:00 am | No Comments Let’s have a discussion about the wonderful Spring Festival in Disneyland Paris. 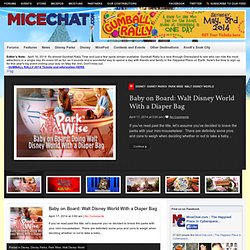 Lots of flowers, some bees, and Spring-ish things. Mark and Steve discuss it in depth, as well as the new name for the… The Unofficial Disney Vacation Planning Guide - Walt Disney World, Disneyland and Disney Cruise Line. The history and heritage of DisneylandWalt's Apartment. Southern California and Disneyland travel guides, articles, tips, advice, photos, and help.

Here you will find our California and Disneyland information, tips, and tools to help you plan your SoCal vacation! 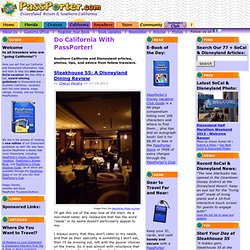 We also offer a full, award-winning guidebook to Disneyland and Southern California, complete with full-color photos, maps, ratings, reviews, and our famous PassPockets: Upcoming Profiles in History auction is a Disney collector’s dream, with theme park artwork, posters, vehicles, Imagineering models and more. On May 14-15, 2011, Profiles in History will be holding its latest Hollywood Memorabilia auction, this time featuring exciting items from the world of Disney that are guaranteed make any collector’s eyes bulge and pockets quite a bit lighter. 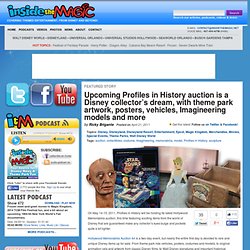 Hollywood Memorabilia Auction 44 is a two-day event, but nearly the entire first day is devoted to rare and unique Disney items up for sale. From theme park ride vehicles, posters, costumes and models, to original animation cels and artwork from classic Disney films, to Walt Disney signatures and important historical documents, there is no area of Disneyana that will not be included in this auction. Below is just a small sampling of some of the most impressive items Profiles in History has gathered for the upcoming auction from private Disney collections around the world. A full auction catalog can be downloaded here.