We'll Take You to Disney Every Day! 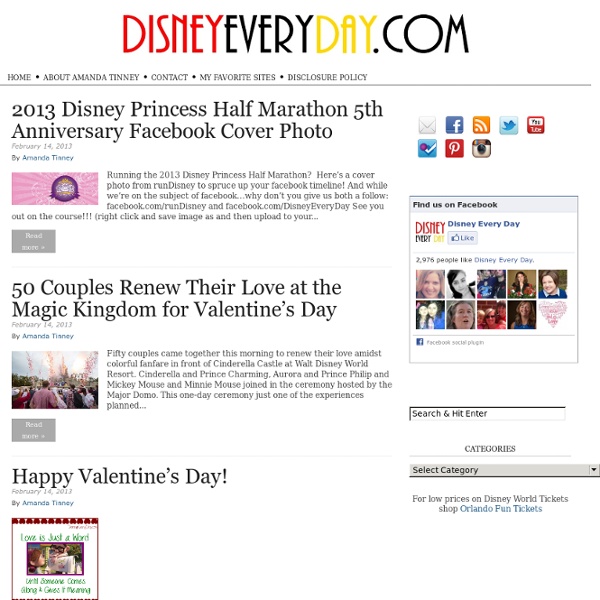 Destination EPCOT: First Impressions - Blogs - MiceChat You only get one chance to make a great first impression and that is certainly the case with theme parks. The arrival experience must transport guests from where they are to where the designers want them to be. Come with me as we explore the front gates of Epcot, in Orlando Florida. (For the purposes of this story, we use "EPCOT" in all caps to talk about Walt's ideas for a city of tomorrow and "Epcot" to discuss the theme park which was actually built) LOST EPCOT - World Showcase - History "Back, back, over the falls!!" Basic World Showcase is the second themed area of Epcot, after Future World. Disney World - The Largest Unofficial On-Line Guide to Disney World, Walt Disney World

The Crowd Tracker: Get Email Updates When The Crowd Calendar Changes TouringPlans.com is proud to introduce a new feature included with a premium subscription: The Crowd Tracker (see Disneyland and Walt Disney World trackers). The Crowd Tracker allows users to select their specific travel dates from the Crowd Calendar and monitor changes to them. If the crowd levels or recommended parks change, an email will be sent (maximum one email per 24 hours). The email will inform users of increases or decreases greater than 1 point for individual parks or the resort as a whole, as well as changes at Walt Disney World in recommended parks/parks to avoid.

Muslim Holiday packages Disney Parks Blog - The official blog for Disneyland Resort, Walt Disney World and Disney Cruise Line Anyone want $1 million? Well, Walt Disney Studios is prepared to give that much money away as part of the world premiere of its new movie “Million Dollar Arm,” in which a sports agent (played by Jon Hamm) concocts a scheme to find a young cricket pitcher he can turn into a Major League Baseball star. Walt Disney Studios is staging a contest on April 25th and 26th to find a real-life “million dollar arm” by offering guests (you have to be age 18 and over with no prior professional baseball experience) the chance to throw the fastest strike. Here’s how it works: Participants at three locations;­ Walt Disney World Resort, Disneyland Resort and New York City, get three chances to throw a baseball as fast as possible. Participants who throw the three fastest strikes at each location will be flown to the finals in Hollywood, Calif., where they will attend the world premiere of Disney’s “Million Dollar Arm” on May 6 and get a chance to compete for the grand prize. Click here for official rules.

Trip Planning 101: Packing for Your Walt Disney World Vacation You’re going to Walt Disney World! You’ve chosen your travel dates and made you reservations, but what should you bring with you? To help you with this issue, we’ve created a handy downloadable TOURINGPLANS PACKING CHECKLIST. The checklist includes it all, but the rationale for many of the checklist items is broken down here. Packing for a Walt Disney World vacation involves gathering five types of basic items: Disney Top 10 Alcoholic Drinks at Walt Disney World Walt Disney World is full of restaurants and places to grab a good alcoholic drink (Magic Kingdom excluded, of course). Some drinks are pretty standard Disney cocktails that you can find at most restaurants, others are a little more unusual and are specific to the restaurant. Here are some of my favorite drinks to get when visiting the World. #10: Campari and Strawberry (Todd English’s bluezoo @ Walt Disney World’s Dolphin Resort) – This drink is a apertif concoction of Campari (a bitter liquor made in Italy), Sweet Vermouth, muddled Strawberries and lemon juice topped with Ginger Beer.

Disney World Ticket Calculator Find Disney World Ticket Discounts and Compare Prices by Len Testa April 14, 2014 Every day we check the Disney World ticket prices at Disney and the most popular authorized Disney ticket discount wholesalers: Undercover Tourist, The Official Ticket Center, Kissimmee Guest Services, Maple Leaf Tickets, and Orlando Fun Tickets. We use those prices here, the Disney Ticket Discounts and Deals search engine for Disney World tickets. This search engine will find you the cheapest Disney admission for whatever you want to do. Five Mistakes Guests Make in WDW When a family decides to plan a trip to Walt Disney World, there are a few things that are important to keep in mind to help ensure that your trip is wonderful and enjoyable. 1. Not Realizing the Size – When people plan a trip to Walt Disney World, they always seem to believe that Walt Disney World is similar in size to your standard Six Flags. In reality, Walt Disney World Property is spread across 25,000 acres, almost twice the size of Manhattan. You will need to look into different forms of transportation to get you from point A to point B.

A Disney Mom's Thoughts: Surviving New Year's Eve at WDW With New Year's Eve fast approaching, I scoured the internet looking for all the events/ activities going on at the Walt Disney World Parks on December 31, 2011. You can find those details at the end of this post. Before you get to that information, I'm sharing some thoughts on surviving New Year's Eve at WDW! I've been able to spend 2 New Year's Eve nights at WDW- one at the Magic Kingdom and 1 at then MGM Studios. Here are a few tips to help you out: 1- Decide on the park you want to visit on December 31 and plan to stay the whole day at that park! How MyMagic+ Will Affect Disney Dining Welcome to the Disney Food Blog. If you enjoy this post, you should check out the tour of the site to see all the great Disney Food information we have. Planning your Disney World vacation is about to change—big time. While making your Advance Dining Reservations 180 days in advance will still be important, MyMagic+ is going to make it easier to pre-plan your trip and maybe even save your Disney dollars at the same time!