The world would be a better place without disney. 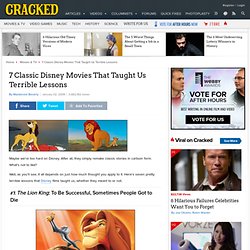 After all, they simply remake classic stories in cartoon form. What's not to like? Well, as you'll see, it all depends on just how much thought you apply to it. Here's seven pretty terrible lessons that Disney films taught us, whether they meant to or not. The Lion King: To Be Successful, Sometimes People Got to Die Simba always knew that he was going to succeed his father, Mufasa, as the next Lion King. Later, all grown up, he reclaims his thrown and Scar suffers the double whammy of falling off a cliff and getting torn apart by hyenas. The Supposed Message: We all have responsibilities we can't ignore. The Actual Message: In order for you to be successful, other people will have to pay. First you have Scar, who knew he couldn't be king of the pridelands until that dick Mufasa and his brat son were out of the way. Then when Simba started to grow some balls, he took back his throne... but only after Scar himself took a dirt nap.

Dreams do come true! The 9 Most Racist Disney Characters. These old Disney movies are a little bit like your aging Uncle Frank. 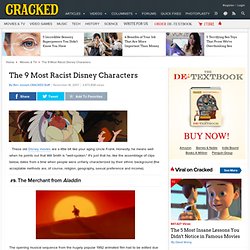 Honestly, he means well when he points out that Will Smith is "well-spoken. " It's just that he, like the assemblage of clips below, dates from a time when people were unfairly characterized by their ethnic background (the acceptable methods are, of course, religion, geography, sexual preference and income). The Merchant from Aladdin The opening musical sequence from the hugely popular 1992 animated film had to be edited due to protest from Arab-American groups for saying about the Middle East what most of us were merely thinking.

Lesson Learned: The Middle East is a barren wasteland where the justice system runs on a clear and simple limb-removal policy. Best (Worst?) Sebastian from The Little Mermaid In this 1989 film, a Jamaican-sounding crab teaches Ariel that life is better "Under the Sea," because underwater you don't have to get a job. Lesson Learned: The Disney Fairy Tale vs. The Original Fairy Tale - Disney (Unofficial) - Families.com. Once upon a time, there was a beautiful princess who lived in a very big, foreboding castle. 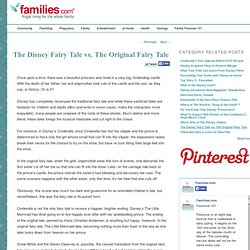 With the death of her father, her evil stepmother took rule of the castle and the rest, as they say, is history. Or is it? Disney has completely revamped the traditional fairy tale and while these sanitized tales are fantastic for children and adults alike (and even in some cases, make the characters more enjoyable), many people are unaware of the roots of these stories. Much darker and more literal, these tales forego the musical interludes and cut right to the chase. The Little Mermaid: Spoiled Brat or Feminist? « mslitjunkie. It’s safe to say, that if the topic of the classic Disney film The Little Mermaid is brought up in front of anyone born between 1989 and 1994, comments that I would expect to hear include “Oh my gosh! 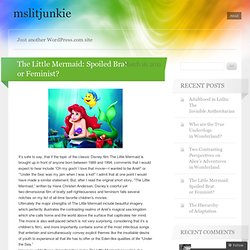 I love that movie—I wanted to be Ariel!” Or “’Under the Sea’ was my jam when I was a kid!” I admit that at one point I would have made a similar statement. But, after I read the original short story, “The Little Mermaid,” written by Hans Christen Andersen, Disney’s colorful yet two-dimensional film of bratty self-righteousness and feminism falls several notches on my list of all-time favorite children’s movies. Ultimately the major strengths of The Little Mermaid include beautiful imagery which perfectly illustrates the contrasting realms of Ariel’s magical sea kingdom which she calls home and the world above the surface that captivates her mind. Link: Disney Princesses: Worst role models a young girl can have « Sherryn Daniel's Blog. Disney has been marketing their Disney Princess franchise for well-over past 10 years. 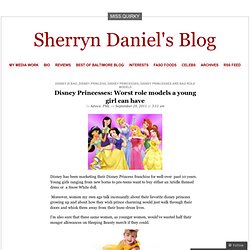 Young girls ranging from new borns to pre-teens want to buy either an Arielle themed dress or a Snow White doll. Moreover, women my own age talk incessantly about their favorite disney princess growing up and about how they wish prince charming would just walk through their doors and whisk them away from their hum-drum lives. I’m also sure that these same women, as younger women, would’ve wasted half their meager allowances on Sleeping Beauty merch if they could.

As lovely as it seems that young girls and older women love to color in conversation with droll tales of Belle being such a humble beauty who deserves the riches of being a new wife to the prince: It’s futile in rearing young women to be indepedent. I’m not really sorry to burst your niave little bubble nor will I recant anything I will say in this post. Also, don’t get me started on Snow White. 7 Disney Princesses That Make the Worst Role Models. Disney movies bad for kids? Me and my friends came up with a list on why we think so.. Kinda funny!