Defining the Role of the Regimental Sergeant Major. In 'The Mandalorian,' Stormtroopers Have Finally Discovered Tactics. A podcast resource for students, professors, enthusiasts and aficionados of International Relations and Related Fields. **** UPDATED: December 2020 **** If you are reading this, chances are you’re interested in international relations, and related fields like national security, human rights, international development, international law and geopolitics. 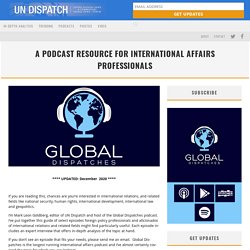 I’m Mark Leon Goldberg, editor of UN Dispatch and host of the Global Dispatches podcast. I’ve put together this guide of select episodes foreign policy professionals and aficionados of international relations and related fields might find particularly useful. Each episode includes an expert interview that offers in-depth analysis of the topic at hand. Collapsing Levels of Trust Are Devastating America. American history is driven by periodic moments of moral convulsion. 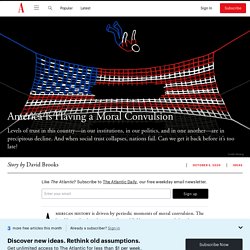 The late Harvard political scientist Samuel P. Huntington noticed that these convulsions seem to hit the United States every 60 years or so: the Revolutionary period of the 1760s and ’70s; the Jacksonian uprising of the 1820s and ’30s; the Progressive Era, which began in the 1890s; and the social-protest movements of the 1960s and early ’70s. These moments share certain features. People feel disgusted by the state of society. Trust in institutions plummets. A highly moralistic generation appears on the scene. Instructional Shifts to Support Deep Learning. How Police Brutality Gets Made. Then they enter training, where a core theme is that it’s a threatening world out there. 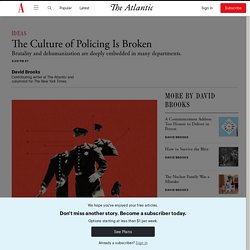 Recruits are told that a guy with a knife 21 feet away can run up and stab you before you have the chance to draw your gun. The rise of PTSD. In 2014, six weeks into her first year at university, Katie was sexually assaulted at a frat party. 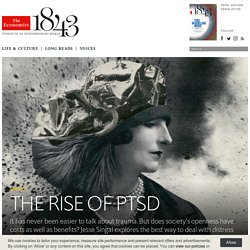 “It was my first exposure to sex at all,” Katie, who is now 23, told me. “I grew up in a really small conservative town, really Christian parents, and I had never even seen a man naked before.” Not long after that, she was assaulted again after going back to a fraternity brother’s room. Ghostbusters, the greatest movie ever made about Republican economic policy. AP Photo The death yesterday of Harold Ramis, the co-writer and co-star of Ghostbusters, has prompted encomiums for the iconic 1980s film. 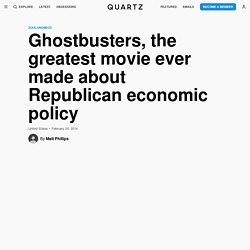 Ghostbusters is a favorite of mine as well. But I just can’t believe how few people recognize the movie—which was released 30 years ago this June—for what it is: a Reaganite carnival of ideological triumph. Ghostbusters isn’t about ghosts. What Really Doomed America's Coronavirus Response. Widespread asystemic thinking may have cost America the entire month of February, and much of what we’d normally consider credible media were part of that failure. 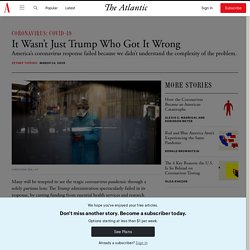 On January 29, about a week after China’s government shifted from a deny-and-censor strategy to massive action and communication, Chinese scientists published a significant paper in The New England Journal of Medicine. The paper estimated the R0 (the basic reproduction number of an infectious disease) from the first known case of coronavirus in early December through January 4 to be little more than 2. That means that, left somewhat unchecked, each infected person infected two more people. Crucially, the paper pointed out evidence of mild and even asymptomatic cases, unlike SARS, which almost always came with a high fever.

Inside the Coronavirus Response: A Case Study in the White House Under Trump. But senior administration officials have criticized Mr. 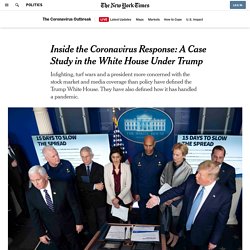 Azar for what they believe was a decision to leave key health figures off the task force early on, particularly Dr. Stephen Hahn, the F.D.A. commissioner and an accomplished oncologist, and Seema Verma, the administrator of the Centers for Medicare and Medicaid Services, the agency in charge of health care for tens of millions of older and poor Americans, absences the officials attributed to petty turf wars. A health and human services official defended Mr. Coronavirus Showed That America Wasn't Up to the Task. The coronavirus pandemic is in its early days. 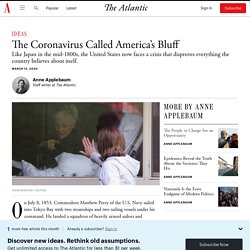 But the scale and force of the economic and medical crisis that is about to hit the United States may turn out to be as formidable as Perry’s famous voyage was. Two weeks ago—it already seems like an infinity—I was in Italy, writing about the first signs of the virus. Epidemics, I wrote, “have a way of revealing underlying truths about the societies they impact.” This one has already done so, and with terrifying speed.

Social Media Is Warping Democracy. Suppose that the biblical story of Creation were true: God created the universe in six days, including all the laws of physics and all the physical constants that apply throughout the universe. 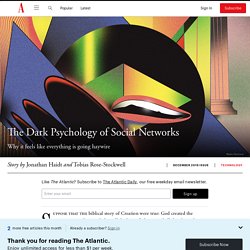 Now imagine that one day, in the early 21st century, God became bored and, just for fun, doubled the gravitational constant. The Age of Decadence. The structures of the Western system, the United States Constitution and administrative state, the half-built federalism of the European Union, are everywhere creaking and everywhere critiqued. 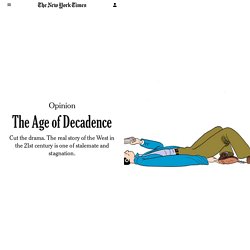 But our stalemates make them impervious to substantial reform, let alone to revolution. How Anti-feminism Is the Gateway to the Far Right. Both men are referring to the right-wing conspiracy theory popularized by the French author Renaud Camus, which warns that nonwhites are having more children than whites, and that the resulting demographic change threatens European culture. This idea has been memefied by the online far right, with different groups painted as the usurpers: The neo-Nazis in Charlottesville, Virginia, chanted “The Jews will not replace us”; for the Christchurch shooter, the threat came from Muslims; in El Paso, it was Hispanic immigrants. In all these strands of replacement theory, controlling white female sexuality and reproduction is vital.

The established insiders of an organization usually like the culture as-is because it led to their success. Analyzing the Motivation of Leaders to Promote Employee Resilience - MAXQDA – The Art of Data Analysis. Guest post by Maximilian Sprößig. In the rapidly and continuously changing workplace, employees are being exposed to new work requirements every day. Some of these changes are, for example, the tertiarization of our society, the informatization of the workplace, the acceleration of production, service and communication processes, and the emergence of entirely new forms of work.

These changes can lead to an increase in work-related stress and even crises, both professional and personal. How well a person deals with these issues comes down to resilience. To avoid experiencing depression and burnout (which are sadly common outcomes of work-related stress), promoting resilience in employees can be a way of helping them cope with stress and other work-related issues. Due to an increased number of work-related conditions, the task of workplace health promotion is the conception and implementation of measures to strengthen health resources.

The 2 types of narcissists you’ll meet at work – ideas.ted.com. Yes, there is a war between science and religion. As the West becomes more and more secular, and the discoveries of evolutionary biology and cosmology shrink the boundaries of faith, the claims that science and religion are compatible grow louder. If you’re a believer who doesn’t want to seem anti-science, what can you do?

You must argue that your faith – or any faith – is perfectly compatible with science. And so one sees claim after claim from believers, religious scientists, prestigious science organizations and even atheists asserting not only that science and religion are compatible, but also that they can actually help each other.

The Era of Urban Warfare is Already Here - Foreign Policy Research Institute. Doctrine Man Is Military Superhero. Making use of history – The Wavell Room. Contributor: Steve has 8 years leadership experience with an infantry unit in addition to experience as a staff officer within an Armoured Infantry Brigade. “Most men do not fight well because their ancestors fought well… There is no devotion to some ancient regimental system”. (Field Marshal Montgomery) Yesterday’s examples won’t win tomorrow’s war. However many would agree that study can help learn lessons for future conflict. For the modern leader this means a professional approach that enables and empowers military thinkers to develop tactics practitioners can use in future. Unfortunately, the British Army has an amateur attitude towards military history. Perhaps you’ve seen a presentation which starts with a quote from Karl Von Clausewitz. First, the level of study from both Clausewitz and Rose goes far beyond that which is common across the Army today.

Why ‘Different Spanks for Different Ranks’ Are Often Justified. It can be frustrating when generals and admirals appear to skate on misconduct charges, but lawmakers should be wary of trying to “fix it.” A leading lawmaker has called out the Air Force for never trying a single general officer by court-martial in its entire history, suggesting it shows higher-ranking personnel face different standards of punishment. Indeed, courts-martial for flag and general officers in all four services are exceedingly rare, particularly in recent history.