How Americans reacted to the rioting at the U.S. Capitol. As a mob of President Donald Trump’s supporters rampaged through the U.S. 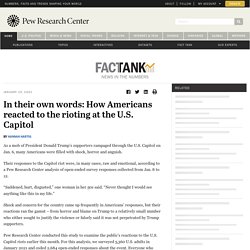 Capitol on Jan. 6, many Americans were filled with shock, horror and anguish. Their responses to the Capitol riot were, in many cases, raw and emotional, according to a Pew Research Center analysis of open-ended survey responses collected from Jan. 8 to 12. “Saddened, hurt, disgusted,” one woman in her 50s said. “Never thought I would see anything like this in my life.” Shock and concern for the country came up frequently in Americans’ responses, but their reactions ran the gamut – from horror and blame on Trump to a relatively small number who either sought to justify the violence or falsely said it was not perpetrated by Trump supporters. Pew Research Center conducted this study to examine the public’s reactions to the U.S. Here are the questions used for this report, along with responses, and its methodology. Nearly four-in-ten adults (37%) expressed a strong negative emotion in response to the riot. Tony Blair speaks out on Donald Trump.

These are the most and least biased news outlets in the US, according to Americans. Gallup/Knight Poll: Americans’ concerns about media bias deepen, even as they see it as vital for democracy – Knight Foundation. Update: On Nov. 9, 2020, Gallup updated the report “American Views 2020: Trust, Media and Democracy,” to correct a methodological error. 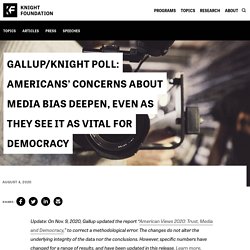 The changes do not alter the underlying integrity of the data nor the conclusions. However, specific numbers have changed for a range of results, and have been updated in this release. Learn more. WASHINGTON – (Aug. 4, 2020) – A new report from Gallup and Knight Foundation finds a widening gap between what Americans expect from the news media and what they think they are getting. Americans expect election outcome to be delayed; have mixed views of how media will respond – Knight Foundation. The majority of U.S. adults think it will be a week or longer before the outcome of the presidential election is known. 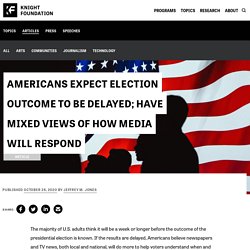 If the results are delayed, Americans believe newspapers and TV news, both local and national, will do more to help voters understand when and how the outcome will be known than cable TV news and major internet company platforms will. However, they are as likely to say they will rely on cable TV news as any other source to find out who won, and unlikely to rely on local news. These results are from a Gallup/Knight Foundation web survey conducted Sept. 24-Oct. 5, with more than 1,500 members of Gallup’s nationally representative panel. Election 2020. CARTOON #1 1. 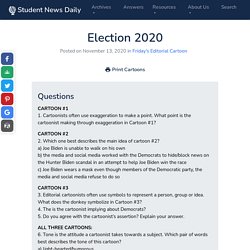 Cartoonists often use exaggeration to make a point. What point is the cartoonist making through exaggeration in Cartoon #1? CARTOON #2 2. Which one best describes the main idea of cartoon #2? Mainstream media. Mainstream media (MSM) is a term and abbreviation used to refer collectively to the various large mass news media that influence many people, and both reflect and shape prevailing currents of thought.[1] The term is used to contrast with alternative media which may contain content with more dissenting thought at variance with the prevailing views of mainstream sources. 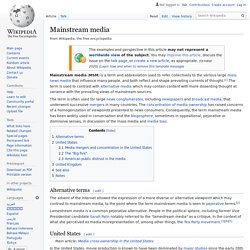 The term is often used for large news conglomerates, including newspapers and broadcast media, that underwent successive mergers in many countries. The concentration of media ownership has raised concerns of a homogenization of viewpoints presented to news consumers. Consequently, the term mainstream media has been widely used in conversation and the blogosphere, sometimes in oppositional, pejorative or dismissive senses, in discussion of the mass media and media bias.

Alternative terms[edit] Lamestream media is a common pejorative alternative. United States[edit] After calling the presidential election, Fox cast doubt on the results and pushed conspiracy theories more than 250 times. Media Matters searched transcripts in the SnapStream video database for all original programming on Fox News Channel for any of the terms “election” or “ballot” or any variation of the term “vote” within close proximity of any of the terms “challenge,” “certified,” “counted,” “not final,” “not over,” “dead,” “stolen,” “steal,” “hammer,” or “scorecard” or any variations of any of the terms “illegal,” “legal,” or “fraud” from 11:40 a.m. 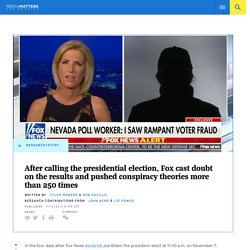 EST November 7 (the time that Fox News called the race for Biden) through November 10, 2020. We counted claims that cast doubt on the election results, such as statements advocating that all “legal” votes need to be counted, and claims that pushed conspiracy theories about the results, such as statements suggesting mass voter fraud. We defined a claim as an uninterrupted block of speech from a single speaker. Individual claims could both cast doubt and push conspiracy theories simultaneously. We included original statements from speakers. Information on US election being censored by ‘powerful interests’ in the media. VP-Elect Kamala Harris Credits Women in Victory Speech. How the World is Reacting to Joe Biden's Election Win. NPR Choice page.