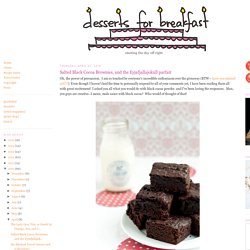 I am so touched by everyone's incredible enthusiasm over the giveaway (BTW-- have you entered yet???) Even though I haven't had the time to personally respond to all of your comments yet, I have been reading them all with great excitement! I asked you all what you would do with black cocoa powder, and I've been loving the responses. Man, you guys are creative--I mean, mole sauce with black cocoa? Who would of thought of that! An incredible number of you commented that you would make black cocoa brownies, and the more I read about black cocoa brownies, the more I started to really crave them. Super chocolate-ty, super dense--nice and robust and dark. Of course, being me, I couldn't leave well enough alone, so I present to you another use of these salted black cocoa brownies, if you manage to stop eating them long enough to make it to this point: the Eyjafjallajokull parfait. 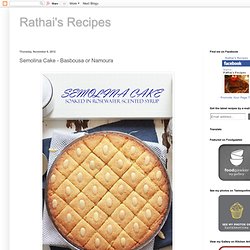 Halloween passed without much fanfare in our family, but something that has been receiving a lot of attention by my family lately is this semolina and coconut cake. Even though everybody in our family has different preferences when it comes to food in general, this cake was relished by all of us, not once but three times last month.

This cake doesn't have a cakey texture but it is very soft, moist and slightly crumbly. It smells heavenly from the rosewater and tastes even better on the second day. It goes by many different names and is wildly popular in Greek, Turkey, throughout the Levant and the North African countries, since many of these countries share a common Ottoman heritage. It's a Date...with Saucy Sticky Date Pudding. The second weekend of June each year brings to me the same realisation, that winter is officially here in Australia and that it’s not going to get ANY warmer for the next 3 months! 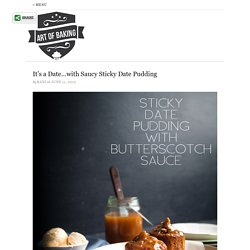 (Actually, I shouldn’t complain too much and also mention that the second weekend of June brings the consolation prize of a day off to celebrate the Queens Birthday!) While I don’t have anything against winter personally, I just don’t like the cold! I have to admit I enjoy the change in seasons and I love watching the tree-lined streets of Melbourne become bare and wintery as the final autumn leaves fall to their resting place on the ground. I also enjoy the fact that with a change in temperature comes a whole new array of seasonal produce and a whole new winter menu of food to cook and enjoy! Date and walnut cake recipe. Chocolate-Ricotta Icebox Cake. Chocolate Banana Cake Bars (Vegan + Gluten-free) I have a hard time walking away from a sale. 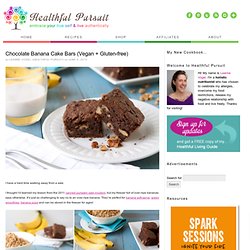 I thought I’d learned my lesson from the 2011 canned pumpkin sale incident, but my freezer full of over-ripe bananas says otherwise. It’s just so challenging to say no to an over-ripe banana. They’re perfect for banana soft-serve, green smoothies, banana pops and can be stored in the freezer for ages! Plus, the bananas I’ve been collecting aren’t your average run of the mill bananas. No bake chocolate cake with walnuts and green figs. My Mom has a birthday today. 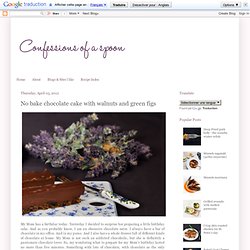 Yesterday I decided to surprise her preparing a little birthday cake. And as you probably know, I am an obsessive chocolate eater. I always have a bar of chocolate in my office. And in my purse. And I also have a whole drawer full of different kinds of chocolate at home. P.S. Ingredients: 300 g 70% chocolate, chopped300 g heavy creama pinch of saltbutter to grease the pancocoa powder to serve250 g walnuts6-7 preserved green figs Preparation: Put walnuts in a baking tray and roast walnuts for 10 minutes in an oven, preheated to 180 C.

Pour into the pan, cover with plastic wrap and let chill overnight. Lemon Angel Food Cake. Kouign Amann Recipe. Is there anything more fabulous than something created through the wonder and miracle of caramelization? 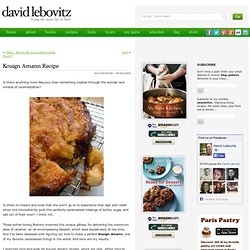 Is there no means and ends that one won’t go to to experience that sigh with relief when one triumphantly pulls this perfectly-caramelized melange of butter, sugar, and salt out of their oven? I think not. Those butter-loving Bretons invented this unique gâteau for delivering the maximum dose of caramel: an all-encompassing dessert, which does double-duty at tea time. Unfussy Apple Cake Recipe. I love this apple cake - here's how it came into being. 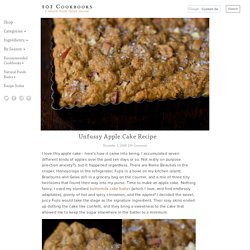 I accumulated seven different kinds of apples over the past ten days or so. Not really on purpose (election anxiety?) , but it happened regardless. There are Rome Beauties in the crisper, Honeycrisps in the refrigerator, Fujis in a bowl on my kitchen island, Braeburns and Galas still in a grocery bag on the counter, and a mix of three tiny heirlooms that found their way into my purse. Chocolate-Prune Cake. A while back, there was a spate of books about how to ‘sneak’ ingredients that are ‘healthy’ into food for your kids, to trick them into eating better. 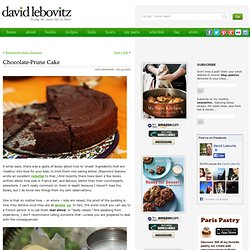 (Raymond Sokolov wrote an excellent rebuttal to that.) And recently there have been a few books written about how kids in France eat, and behave, better than their counterparts elsewhere. I can’t really comment on them in-depth because I haven’t read the books, but I do know two things from my own observations. One is that no matter how – or where – kids are raised, the proof of the pudding is how they behave once they are all grown up. In fact, the worst insult you can say to a French person is to call them mal élevé, or “badly raised.” Bake: Chocolate silk pie. I love to daydream about complicated, extravagant sweets. 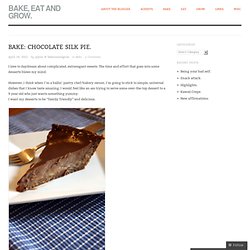 The time and effort that goes into some desserts blows my mind. However, I think when I’m a ballin’ pastry chef/bakery owner, I’m going to stick to simple, universal dishes that I know taste amazing. I would feel like an ass trying to serve some over-the-top dessert to a 9 year old who just wants something yummy. I want my desserts to be “family friendly” and delicious. This chocolate silk pie is a perfect example of a simple, universally fantastic dessert.

Cheesecake Brownie Recipe. If you want to see a normally placid French person go into a crazed frenzy, you don’t need to watch their reaction to me mercilessly butcher their language. 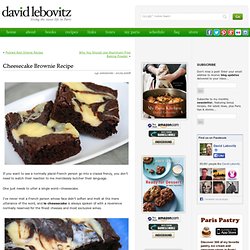 One just needs to utter a single word—cheesecake. I’ve never met a French person whose face didn’t soften and melt at the mere utterance of the word, and le cheesecake is always spoken of with a reverence normally reserved for the finest cheeses and most exclusive wines. Although can you find Philadelphia cream cheese here at various outlets in Paris, when you do find it, it’s prohibitively expensive. If you were to make your own cheesecake using four packages of the stuff, it’d run you about €20, which is nearly $30. Holy mother of Bristol Palin! A couple of French supermarkets do carry their own variations on the Philly-theme, often labeled fromage à tartiner (spreading cheese). Pumpkin Gingerbread Recipe. By the way, we made one batch of this pumpkin gingerbread forgetting to add the melted butter and you know what? It's still turned out fine. Not as moist as the butter version, but still good, and better the next day.

. * * To make pumpkin purée from pieces of leftover pumpkin, just roast or boil the pieces until tender, then remove the skin. Semolina dessert with spices, cocoa and walnuts. Easy and delicious dessert with the strange name "Melahroino" or "Melahroini" which literally means "the dark one" because of its colour thanks to the cocoa and the walnuts. The word actually refers to people with very dark hair (dark brown or black) or to people with darker skin than others (not implying at all though to coloured people, so not to have any misunderstandings here...).

It is a rather traditional recipe with minor differences from region to region and quite popular all year through. Ideally can be served with whipped cream on the side or vanilla ice cream or even a couple of dollops of thick Greek yoghurt Adapted from a recipe of Niki Mitarea. Chocolate Beet Cake with Beet Cream Cheese Frosting. Hey Dude (that I’m currently dating), We need to talk. It’s about your mother. Mostly… it’s about how I need to meet your mother. We’ve been carrying on for a while now… and I need to meet the lady that birthed you, clothed you, slapped you upside the head, and made you the awesome man you are now.