This Small Cabin With Movable Walls Can Adapt To Any Occasion, Mood, Or Weather Condition. July 29, 2021 Dutch designer Caspar Schols, has created ANNA Stay, a versatile small wood cabin with two different ‘shells’ as outer walls, which are supported on rails, allowing the interior to be opened to the outdoors. 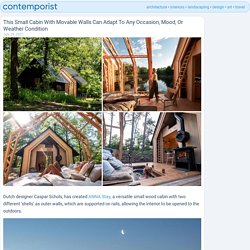 Walls Of Windows On This Cabin Allow For Views Of The Surrounding Forest. March 10, 2021 Photography by Tonu Tunnel b210 architects has designed a small wood cabin in Estonia, that’s used as a hotel room for the Maidla Nature Resort. 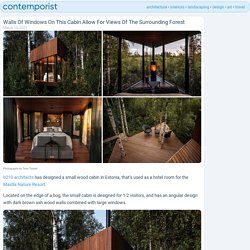 Located on the edge of a bog, the small cabin is designed for 1-2 visitors, and has an angular design with dark brown ash wood walls combined with large windows. The tiny treehouse-inspired building is accessed via a boardwalk that connects to the deck. Window Placements In This Home Frame The Views Like Artwork. Brown & Brown Architects has designed the remodel and addition of a traditional house in the heart of the Cairngorms National Park in Aviemore, Scotland. 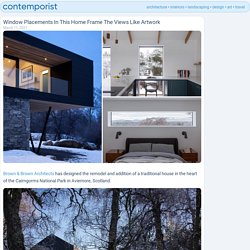 The contemporary extension has a timber and glass upper volume that rests above a stone plinth, and extends outwards, supported by exposed steel columns. The addition has a material palette of local natural stone, Siberian Larch, natural slate, blackened stainless steel, and glass. A glass-lined hallway connects the original home and the new addition. The addition was designed to create larger social spaces for family gatherings. Cedar Shingles And Peaked Roofs Allow This New Home To Fit In With The Traditional Beach Houses Found In The Area. Architecture firm Workshop/APD has designed a Nantucket beach home that showcases the trademark cedar siding that’s often seen in the area. 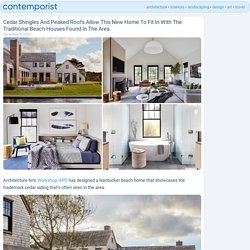 Cedar shingles were used as they are a material that weathers and ages beautifully in the local climate. A 100 Year Old Barn In Quebec Was Given A New Life. Photography by Ulysse Lemerise Bouchard. 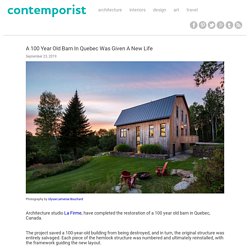 Rowland+broughton Have Designed The 'Game On' House In Colorado. Photography by Brent Moss. 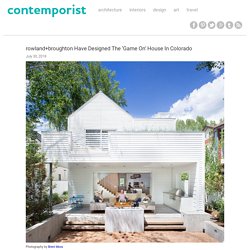 A Contemporary Barn Inspired Home In Sydney. The new addition to this house in California is clad In Shou Sugi Ban siding. Photography by Mathew Millman This home, located near San Francisco, California, was originally a joint venture between Min | Day and Burks Toma Architects, and was substantially completed in 1999. 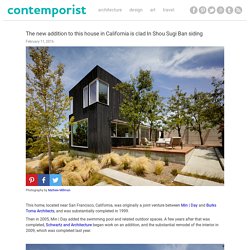 Then in 2005, Min | Day added the swimming pool and related outdoor spaces. A few years after that was completed, Schwartz and Architecture began work on an addition, and the substantial remodel of the interior in 2009, which was completed last year. Schwartz and Architecture created a two-story addition, clad in a type of siding called Shou Sugi Ban, which is a technique of charring wood to protect it. 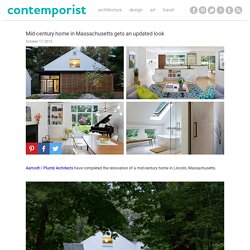 The designer’s description Three old barns were converted to a mid-century modern home in the 1950’s by Henry Hoover, a prolific architect that built many Mid-Century modern homes in Lincoln MA. In 1985 parts of the house were renovated to create an eclectic facade and gallery with a sculptural kitchen and entry. A Home Designed For A Growing Family In Houston, Texas. Architecture firm CONTENT, have designed the Kipling Residence, a new home in Houston, Texas. 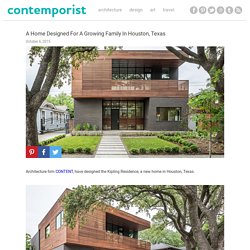 The description from the designer: The Kipling Residence is a new addition to the Montrose neighborhood of Houston just north of the Menil grounds. Designed for a growing family of five, it allows for generous open family zones oriented to large glass walls facing the street and a courtyard pool. The courtyard also creates a buffer between the master suite and the children’s play and bedroom zones. Fixed wood slats provide privacy on the first floor while a large sliding second floor panel allows the street balcony to exchange privacy control with the study. A Contemporary Cottage In The Dutch Countryside. Zecc Architects, together with interior designer Roel Norel, have designed a small contemporary cottage in a rural area north of Utrecht in The Netherlands. 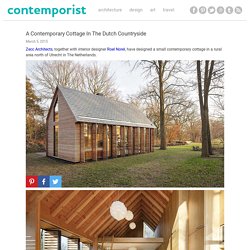 Architecture: Zecc Architects Interior design: Roel Norel. Light glows through the cedar facade of Writer's Shed by WSD. Hidden at the bottom of a London garden, this glowing shed by British studio Weston, Surman & Deane was designed as a writing retreat for an author (+ slideshow). Weston, Surman & Dean was asked to build a studio that reflected the client's passion for children's literature and mythology, and responded by creating a whimsical cabin that features a back-lit facade. The inner facade of the Writer's Shed is shingle-clad with a glazed sliding door that opens out to a covered veranda facing back towards the house. A cedar screen fronts the veranda and gaps between the narrow slats allow light to shine out at night.

This Swedish house has a large gable-roofed extruded space facing the lake. Hammer Architects Design A Home In The Forest With Abundant Natural Light. Hammer Architects have designed the North Pamet Ridge House, that is surrounded by woodland in Truro, Massachusetts. From the architects This two story, four-bedroom residence is sited along a high ridge surrounded by dense woodland. The Håkansson Tegman House by Johan Sundberg. Johan Sundberg designed the Håkansson Tegman house in Höllviken, Sweden. Project description Höllviken south of Malmö was originally a seaside resort, but the forested rows of summer houses are continuously being transformed into a carpet of permanent housing.

Elmthorpe House by Waind Gohil re-interprets neighbouring homes. This house in Oxford, England, by Waind Gohil Architects mirrors the style and shape of older terraced houses on its street, but features a pared-back design to distinguish it as a contemporary addition (+ slideshow). London studio Waind Gohil Architects gave Elmthorpe House a glazed gable, hidden drainpipes, and a limited palette of materials to create a simplified version of adjacent terraced houses. "While the form of the house reflects the scale of adjacent buildings, a limited palette of materials is seamlessly detailed to complement the house's simple form and re-interpret the vernacular," said architect John Ashton.

The residence was built for landscape and garden designer Angus Thompson and his family, and replaces an industrial building that had been used for making sheds. Blue Hills House by la SHED architecture. Cycle House by Chadbourne + Doss Architects. Chadbourne + Doss Architects have recently completed a house for two people and 18 bicycles in Seattle, Washington. This new 2,400 square foot residence is located at the intersection of two major bike routes in the Mount Baker neighborhood of Seattle. The lot is narrow, but has lake and mountain views to the east. We sought to craft an efficient custom residence that uniquely represents the Owners’ personality and lifestyle.Martin and Shelley, a very active couple, wanted a home that would not only have storage and maintenance space for their 18 bicycles, but would also facilitate entertaining, provide cozy nooks for reading and relaxing, and maintain a strong connection to the exterior.They were very engaged in our design process, even providing us with scent vials meant to evoke sensibilities they wished to experience in their home- cool ocean, woody comfort, industrial, and balanced quiet/calm.

Kinetic louvres move and pivot in three dimensions to screen sunlight. Architecture student Tyler Short has developed an alternative to the traditional window shade - mechanical louvres that move in three dimensions to adapt to sunlight at different times of the day (+ movie). Like vertical indoor blinds, the conceptual Penumbra shading system would hang down in front of windows and could be pivoted left and right to adapt to the east and west orientations of the sun.

But it would also be able to fold upwards to create a horizontal shade against the high afternoon sun. "This project was designed to offer a kinetic and mechanical solution to a problem that would otherwise be nearly impossible to solve with static architectural components: providing shading across a building facade for both low evening sun and high afternoon sun conditions," explained Short, who created the design for his architecture degree at the University of Oregon.

Woodpeckers by Ström Architects. Here's another small-scale project featuring strikingly realistic renderings - this time a timber-clad home in England by Ström Architects, who claim that investing in quality CGI is "more effective than advertising" (+ slideshow + interview). Two Passive Solar Gain Houses in Porthtowan by Simon Conder Associates. British firm Simon Conder Associates has built two wooden houses into the side of a steep hill in the English coastal village of Porthtowan (+ slideshow).