‘Their Goal Is to Make You Feel Helpless’: In Xi’s China, Little Room for Dissent. Most Dictators Self Destruct. Why? Ceausescu was overconfident. 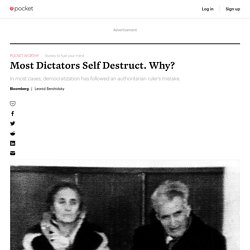 Photo by Spiegl / Ullstein Bild via Getty Images. With authoritarian rulers ascendant in many parts of the world, one wonders what must happen for their countries to liberalize. The likes of Vladimir Putin in Russia, Recep Tayyip Erdogan in Turkey or Xi Jinping in China are entrenched, experienced and not unpopular — so should their opponents simply resign themselves to an open-ended period of illiberal rule? According to Daniel Treisman, a UCLA political scientist, that's not necessarily the case. For a recent paper, he analyzed 218 episodes of democratization between 1800 and 2015 and found they were, with some exceptions (such as Danish King Frederick VII's voluntary acceptance of a constitution in 1848), the result of authoritarian rulers' mistakes in seeking to hold on to power.

Treisman's list of mistakes is worth citing in full. These are all very human errors of judgment. Leonid Bershidsky is Bloomberg Opinion's Europe columnist. Mind Control in China Has a Very Long History. China’s Rigid Stability – Yu Jianrong 于建嵘 analyses a predicament. In November 2012, Foreign Policy named Yu Jianrong 于建嵘 one of the Top 100 Global Thinkers and described the famous scholar who works in the Chinese Academy of Social Sciences (CASS) in Beijing as a ‘rare Chinese academic who has taken up the challenge of defining how exactly China could change course’. 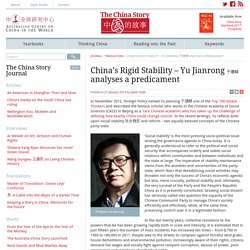 In his recent writings, Yu reflects both upon social stability 社会稳定 and reform – two equally beloved concepts of the Chinese party-state. Professor Yu Jianrong. ‘Social stability’ is the most pressing socio-political issue driving the governance agenda in China today. It is generally understood to refer to the political and social security that accompanies orderly and stable social relations within communities and between individuals and the state at large. In the last twenty years, collective resistance to the powers-that-be has been growing rapidly both in scale and intensity. Chinese police training. Chapter 3: The Ideology of Law and Order. Justice stands at the intersection between state and society in all of its dimensions. 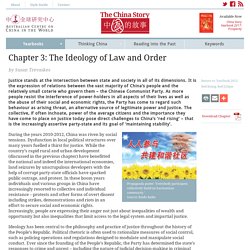 It is the expression of relations between the vast majority of China’s people and the relatively small coterie who govern them – the Chinese Communist Party. As more people resist the interference of power-holders in all aspects of their lives as well as the abuse of their social and economic rights, the Party has come to regard such behaviour as arising threat, an alternative source of legitimate power and justice. The collective, if often inchoate, power of the average citizens and the importance they have come to place on justice today pose direct challenges to China’s ‘red rising’ – that is the increasingly assertive party-state and its goal of ‘maintaining stability’. Propaganda poster: ‘Everybody participate; collectively build an harmonious community.’Source: Baidu Baike During the years 2010-2012, China was riven by social tensions. Thought Reform And The Psychology Of Totalism : Robert Jay Lifton : Free Download, Borrow, and Streaming. 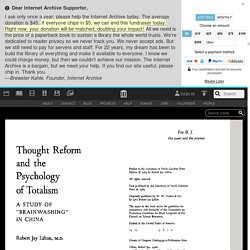 Most can’t afford to give, but we hope you can. The average donation is $45. If everyone chips in $5, we can end this fundraiser today. Right now, a generous supporter will match your donation, so you can double your impact. Why Oppression Is Rising in Xinjiang and Hong Kong. Disturbing things have been happening in China lately. 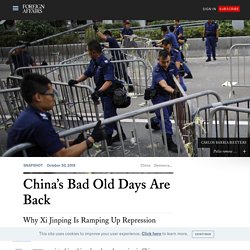 Hundreds of thousands of Muslim Uighurs have been sent to Orwellian reeducation camps in the western province of Xinjiang. A political party in Hong Kong has been outlawed despite the city’s special status and history of free speech. Teachers in a southern port city were asked to hand over their passports so that closer watch could be kept on their movements. An ailing dissident, the Nobel Prize laureate Liu Xiaobo, was barred from seeking medical treatment abroad. Upon traveling to his native China, the chief of the international crime-fighting organization Interpol vanished, only to reappear in government custody, facing corruption charges.

As reports of such events trickle out, each may be shocking in its own right but all too easy to dismiss as an outlier to more positive trends. Stay informed. In-depth analysis delivered weekly. But these heavy-handed measures have not simply rolled back the reforms and opening of past decades. Subscribe to read. China to require patriotism education for intellectuals. Chinese authorities are requiring intellectuals to participate in patriotism-themed activities and training to achieve the Chinese dream of national rejuvenation. 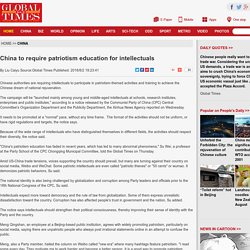 The campaign will be "launched mainly among young and middle-aged intellectuals at schools, research institutes, enterprises and public institutes," according to a notice released by the Communist Party of China (CPC) Central Committee's Organization Department and the Publicity Department, the Xinhua News Agency reported on Wednesday. It needs to be promoted at a "normal" pace, without any time frame.