A Spreadsheet of China's Censorship Shows the Human Toll. In China, don’t question the heroes. 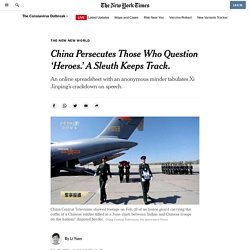 At least seven people over the past week have been threatened, detained or arrested after casting doubt over the government’s account of the deaths of Chinese soldiers during a clash last year with Indian troops. Three of them are being detained for between seven and 15 days. The other four face criminal charges, including one man who lives outside China. “The internet is not a lawless place,” said the police notices issued in their cases. “Blasphemies of heroes and martyrs will not be tolerated.” Their punishment might have gone unnoticed if it weren’t for an online database of speech crimes in China.

The list — which links directly to publicly issued verdicts, police notices and official news reports over the past eight years — is far from complete. Still, the list paints a bleak picture of a government that punishes its citizens for the slightest hint of criticism. The person behind the list is a bit of a mystery. Mr. China Is Now Sending Twitter Users to Prison for Posts Most Chinese Can’t See. HONG KONG—China’s Communist Party is amping up efforts to control its image around the world by jailing Chinese citizens, many of them ordinary people with little influence, who use foreign social media to criticize Chinese leader Xi Jinping and his government. 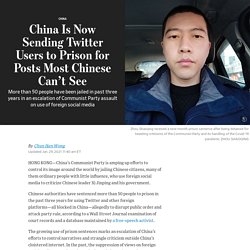 How China Censored Covid-19. This article is copublished with ProPublica, the nonprofit investigative newsroom. 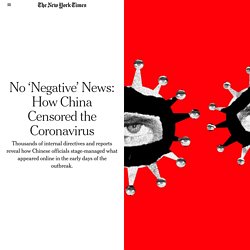 In the early hours of Feb. 7, China’s powerful internet censors experienced an unfamiliar and deeply unsettling sensation. They felt they were losing control. The news was spreading quickly that Li Wenliang, a doctor who had warned about a strange new viral outbreak only to be threatened by the police and accused of peddling rumors, had died of Covid-19. Grief and fury coursed through social media. To people at home and abroad, Dr. Yet China’s censors decided to double down. They ordered news websites not to issue push notifications alerting readers to his death. The orders were among thousands of secret government directives and other documents that were reviewed by The New York Times and ProPublica.

At a time when digital media is deepening social divides in Western democracies, China is manipulating online discourse to enforce the Communist Party’s consensus. “This is a huge thing,” he added. Dr. Mike Pompeo’s Dad was a Hunanese Bandit and Other Real Fake News. Did you know that getting COVID-19 can make women infertile? 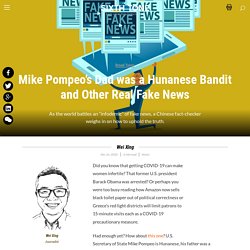 That former U.S. president Barack Obama was arrested? Or perhaps you were too busy reading how Amazon now sells black toilet paper out of political correctness or Greece’s red light districts will limit patrons to 15-minute visits each as a COVID-19 precautionary measure. Had enough yet? How about this one? U.S. Those are just some of the headlines and reports I’ve seen over the past couple months, scrolling through my parents’ social media posts, chat groups of secondary school classmates, microblogging platform Weibo, and Jinri Toutiao — China’s most popular news portal. They have, without exception, garnered widespread readership, been shared across social media, and generated significant discussion. And they are, without exception, fake.

There is a real demand in China for international news. South Park's "Band in China": Chinese nationals watch and react. China anti-censorship protest attracts support across country. Hundreds of protesters gathered in front of the headquarters of a southern newspaper on Monday in a rare display of public anger over China's draconian censorship regulations. 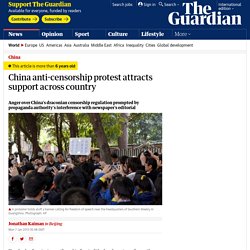 Many held signs calling for greater press freedom and expressing support for the newspaper's editorial employees, some of whom have gone on strike against the provincial propaganda authority's interference with a recent editorial. "I feel the ordinary people must awaken," demonstrator Yuan Fengchu told the Associated Press outside of left-leaning newspaper Southern Weekend's office in Guangzhou. "The people are starting to realise that their rights have been taken away by the Communist party and they are feeling that they are being constantly oppressed. " Late last week, employees at Southern Weekend – also known as Southern Weekly – wrote an open letter to the provincial propaganda department demanding the resignation of one of its highest-ranked officials, Tuo Zhen.

The public weighed in quickly and forcefully. China’s new television rules ban homosexuality, drinking, and vengeance. This article was updated with information about new online rules.

In the past decade, Chinese society has embraced homosexuality more openly than many neighboring nations in Asia. But a new set of rules from a subdivision of SARFT, one of the main media censorship bodies, go in the other direction. If upheld, Chinese producers can no longer make television shows depicting ”abnormal sexual relations or sexual behavior” including “homosexuality” or “perversion.” China’s Propaganda Mission in 15 Characters. In the latest edition of Seeking Truth (求是), the Chinese Communist Party’s chief official journal of theory, the president of Xinhua News Agency, Cai Mingzhao (蔡名照), conveys to his ranks the “spirit” of President Xi Jinping’s speech last month to a national conference on propaganda and ideology. 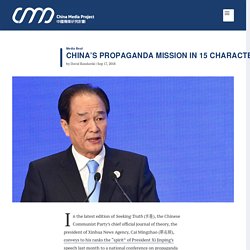 The text, naturally, is a dense layering of official terminologies, the vast majority of them generally familiar to those poor souls who routinely wade through the tide pools of Party discourse. Everything centers, tellingly, around the figure of Xi Jinping and his defining ideological concept. Scmp. Subscribe to read. China and censorship.