Christmas celebrations in full swing in Beijing despite China’s festive crackdown. South Park's "Band in China": Chinese nationals watch and react. "Exponents of a Higher Civilization:" The Chinese Educational Mission - The Ultimate History Project. Boys on Arrival in the US, Connecticut Historical Society “A visitor to the City of Hartford...will be likely to meet on the street groups of Chinese boys, in their native dress, though somewhat modified, and speaking their native tongue, yet seeming, withal, to be very much at home.”Joseph H. 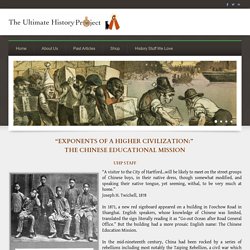 Twichell, 1878In 1871, a new red signboard appeared on a building in Foochow Road in Shanghai. English speakers, whose knowledge of Chinese was limited, translated the sign literally reading it as “Go-out Ocean after Road General Office.” But the building had a more prosaic English name: The Chinese Education Mission. In the mid-nineteenth century, China had been rocked by a series of rebellions including most notably the Taiping Rebellion, a civil war which had led to an uprising against China’s ruling dynasty. China’s Leader Pushes Back at Lady Gaga and Western Culture. BEIJING — President has said must strengthen its cultural production to defend against the West’s assault on the country’s culture and ideology, according to an essay in a Communist Party policy magazine published this week. 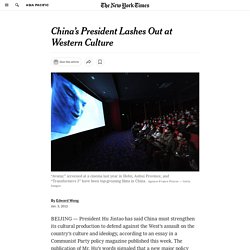 The publication of Mr. Hu’s words signaled that a new major policy initiative announced in October would continue well into 2012. The essay, which was signed by Mr. Document 9: A ChinaFile Translation. This weekend, China’s leaders gather in Beijing for meetings widely expected to determine the shape of China’s economy, as well as the nation’s progress, over the next decade. 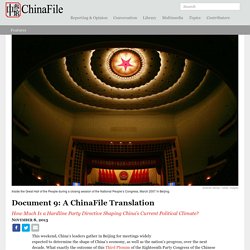 What exactly the outcome of this Third Plenum of the Eighteenth Party Congress of the Chinese Communist Party will be remains shrouded in no small measure of secrecy, like most matters of high politics in China. President Xi Jinping has signaled that a significant new wave of economic liberalization may be in the works. But in the realm of political reform, Xi also has signaled a deep reluctance. In fact, many of the actions taken and techniques used under his year of leadership suggest a return to ideas and tactics that hark back to the days of Mao Zedong. What suggests the significance of Document 9 is the fact that a worrisomely harsh crackdown against human rights lawyers, media outlets, academics, and other such independent thinkers has followed.

Mingjing Magazine, a U.S. Unraveling China’s Campaign Against Western Values. A recent flurry of translations at Fei Chang Dao tracks the development of China’s current campaign against “Western values” in education, from accusations last summer of infiltration at the Chinese Academy of Social Sciences, through its spread to universities in the fall, to the controversy over statements by education minister Yuan Guiren in January. 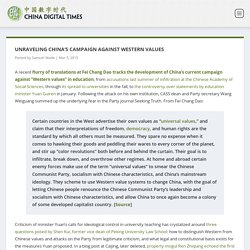 Following the attack on his own institution, CASS dean and Party secretary Wang Weiguang summed up the underlying fear in the Party journal Seeking Truth. From Fei Chang Dao: Certain countries in the West advertise their own values as “universal values,” and claim that their interpretations of freedom, democracy, and human rights are the standard by which all others must be measured.

They spare no expense when it comes to hawking their goods and peddling their wares to every corner of the planet, and stir up “color revolutions” both before and behind the curtain. Their goal is to infiltrate, break down, and overthrow other regimes. China Targets Western "Cultural Threats" People’s Liberation Army senior colonel Gong Fangbin (Source: PLA Youth). 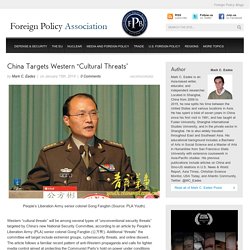 Western “cultural threats” will be among several types of “unconventional security threats” targeted by China’s new National Security Committee, according to an article by People’s Liberation Army (PLA) senior colonel Gong Fangbin (公方彬). Additional “threats” the committee will target include extremist groups, cybersecurity threats, and online dissent. The article follows a familiar recent pattern of anti-Western propaganda and calls for tighter media control aimed at protecting the Communist Party’s hold on power under conditions of rapid social change in China.

Chinese President Hu Jintao warns of cultural warfare from West. He also said the Party must meet the "growing spiritual and cultural demands of the people". 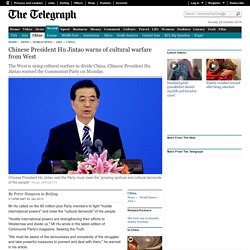 The call to arms against the West's perceived collective cultural genocidal policy follows recent Government orders to propaganda officials to push harder China's expensive global "soft power" drive. The Communist Party is splashing out 45 billion yuan (£4 billion) to expand its overseas media, including a United States and UK edition of the state-run and heavily censored China Daily, the state news agency Xinhua, and China Central Television's (CCTV) multilingual news and culture programming. Overseas Confucius Institutes have also sprung up to try and win over a sceptical international audience impressed by Beijing's economic success but wary of its harsh authoritarian governance.

Spooked since the start of the Arab Spring uprisings a year ago, Beijing has been further tightening internet and media control in an attempt to "improve positive publicity" and guide public opinion. Why’s Beijing So Worried About Western Values Infecting China’s Youth? In early December, Chinese President Xi Jinping ordered the country’s universities to “adhere to the correct political orientation.” 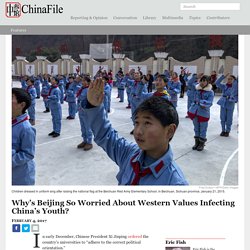