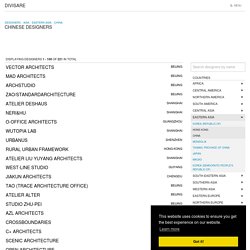 Join us in taking a stand against the short attention architecture media. Divisare is the result of an effort of selection and classification of contemporary architecture conducted for over twenty years. Patient work, done with care, image after image, project after project, to offer you the ideal tool with which to organize your knowledge of contemporary architecture. Instead of a quick, distracted web, we want a slow, attentive one. Instead of hastily perused information, we prefer knowledge calmly absorbed. Divisare subscription is free for teachers & students No Ads. Find out more about why divisare exists, what guide us and what our readers say about us. 长安月 — Traditional Chinese painting by 黄秋园Huang Qiuyuan.... Wenqiang Han: twisting courtyard. 'Twisting Courtyard' is located in Paizihutong, Dashilar Area, Beijing. 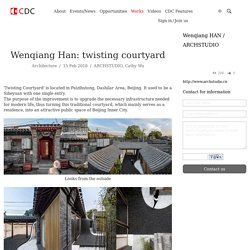 It used to be a Siheyuan with one single entry. The purpose of the improvement is to upgrade the necessary infrastructure needed for modern life, thus turning this traditional courtyard, which mainly serves as a residence, into an attractive public space of Beijing Inner City. Looks from the outside Looks from the inside For building type "Siheyuan", the courtyard is the core of living fun. Analysing maps Construction process. Wei Sun： Modern innovation in traditional architecture. Wei Sun is the Partner and Design Director of HWCD (Harmony World Consultant & Design). 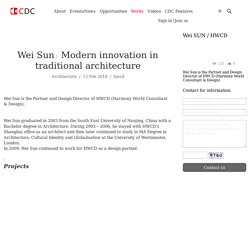 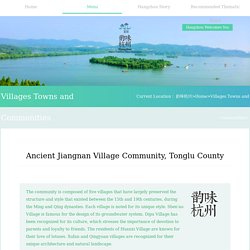 Jiangnan ancient village group was built in the Southern Song Dynasty, with relics of primitive village pattern and style preserved; it belongs to the national historical and cultural village, provincial historical and cultural protection block. It has ancient buildings in Ming and Qing Dynasties for more than 140 sites, in the Republic of China for more than 60 sites; all of which are in exquisite carving. (Source: Tonglu County Government Network) Source：www.ywhangzhou.cn Editor：CHENG Huiyu. Guizhou, Dali Village, China. Guizhou villages were added to the UNESCO WH tentative list in 2012 for their unique vernacular landscape that was shaped by the distinct ethnic groups in the region. 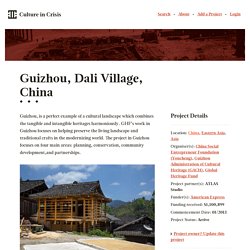 GHF’s work in Guizhou focuses on helping preserve the living landscape and traditional crafts in the modernizing world. The project in Guizhou focuses on four main areas: planning, conservation, community development,and partnerships. GHF will support the design of a master plan for each village created in partnership with Shanghai Tongi University and Pekin University. These master plans will analyze the current cultural resources in the villages and proposed conservation and development strategies. The plan will keep in mind traditional vernacular landscapes while promoting new design guidelines for any future development. 大利 Dali Village. Shitang Village Internet Conference Centre: the practice of rural architecture in the new era. The trend of modernization and urbanization in rural development inevitably requires the introduction of new types of functions. 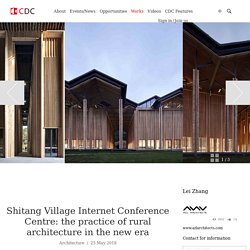 As multi-functional buildings with large space, the Internet conference center is one of them. Taking the commune auditorium and the vegetable greenhouse as the original form, Shitang Village Project in Jiangning tries to reconstruct public buildings in a rural context. Efforts have been made to rapidly build a system through industrialization, bringing in the technology of pre-fabricated super slender column structure, selectively applying suitable technology to eliminate the existence of weakened and materialized buildings and restoring the primitive feeling of rural villages, hence having conducted a rejuvenated construction practice in an extremely short construction period of time in rural villages. Big houses in traditional Chinese countryside are rarely seen.

“The Internet conference center”is a new functional type in the countryside. Guizhou Project: ‘Across Chinese Cities’ - The Object Spaces and Rituals of the Collective, Venice Biennale 2018. Situated in a small valley at the top of a mountain ridge, Dali village is home to a Dong ethnic group whose local history can be traced back to the early Ming dynasty approximately six hundred years ago. 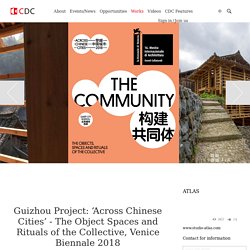 The village is in Qingdongnan, at the south-east corner of Guizhou province. In this area, the mountainous and difficult terrain has allowed various ethnic groups to settle in sites that have allowed communities to maintain a degree of cultural autonomy and isolation. The Dong people’s primary cultural markers are their spoken language, handmade textiles and dress specifically to their community, an ethereal style of chorus singing, and chuān dòu (穿斗) style timber architecture. In the spring of 2016, a road was completed that linked Dali up to a new regional network of infrastructure aimed at economic development and growing the eco-tourism sector. China Design Centre. China Online Museum – WelCOMe to the real COM!